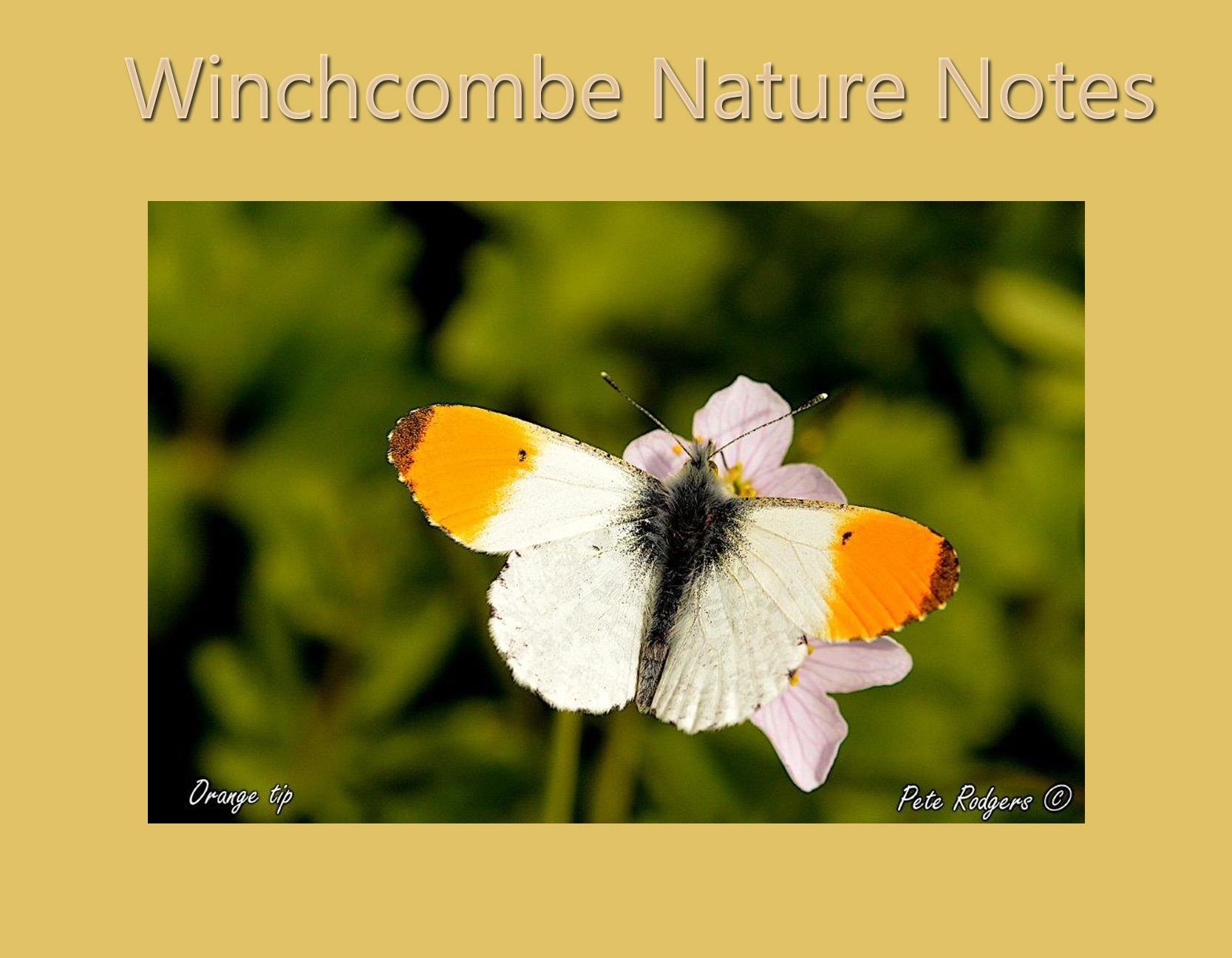 Spring is well and truly with us and has been officially, since the beginning of March.

March produced some very pleasant sun and racegoers at the National Hunt festival even enjoyed three beautiful days out of four. The ‘off day’ was Ladies Day when the distaff side of the racing community found their efforts at putting on a show all came to nought thanks to the rain.

The problem with a succession of warm days early in the year is that it can lead Mother Nature into thinking that spring has arrived when, in fact, Jack Frost hasn’t finished his work.

He has a nasty habit of reappearing and delivering an unwelcome nip as happened this year. Anyone growing magnolias will testify to that. Looking superb for many days, a couple of frosty nights put paid to their blossom for another year, leaving a brown, rather unsightly mess where previously colourful beauty had reigned.

And this can happen to other plants as well, although our wild flora is hardy enough to cope. Growth may be trimmed back but it will catch up eventually.

I had seen the occasional red admiral and peacock butterfly on the wing on warmer days in January and February but into March and I was looking forward to the first brimstone of the year. I was not disappointed and found it uplifting to see a butter-coloured male flitting in front of me. Small tortoiseshell and comma soon followed and then, a few days ago, the first orange tip of the year. 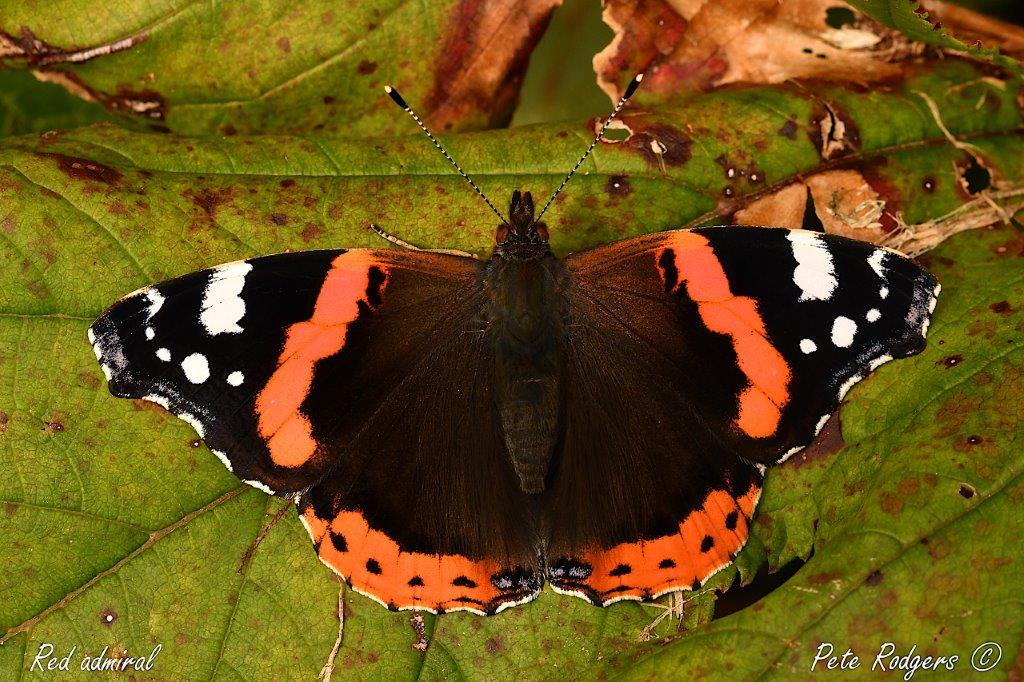 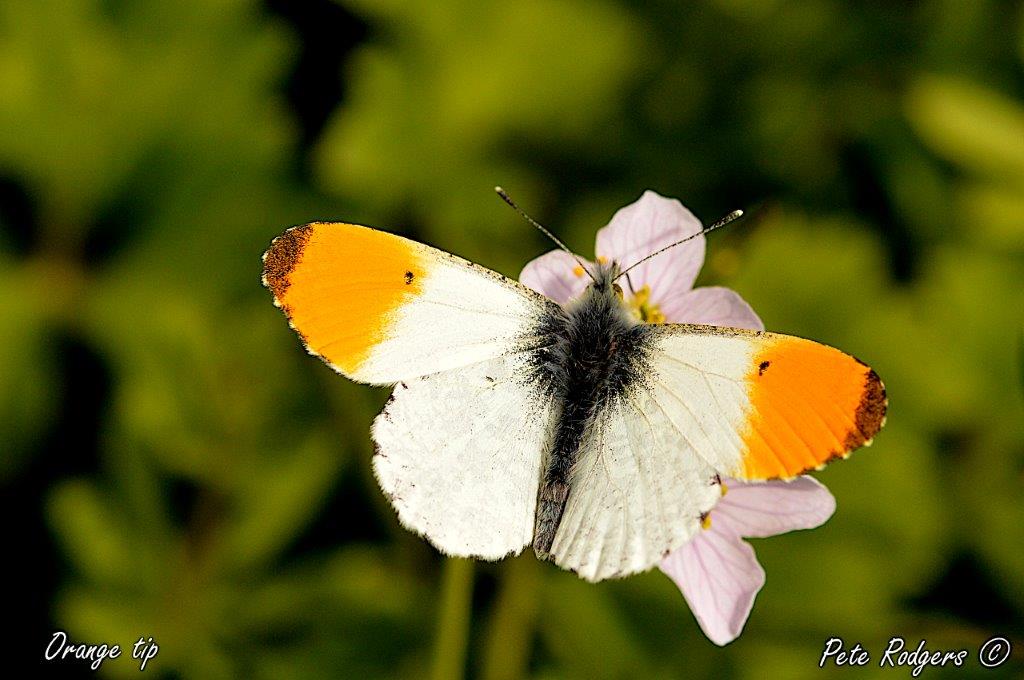 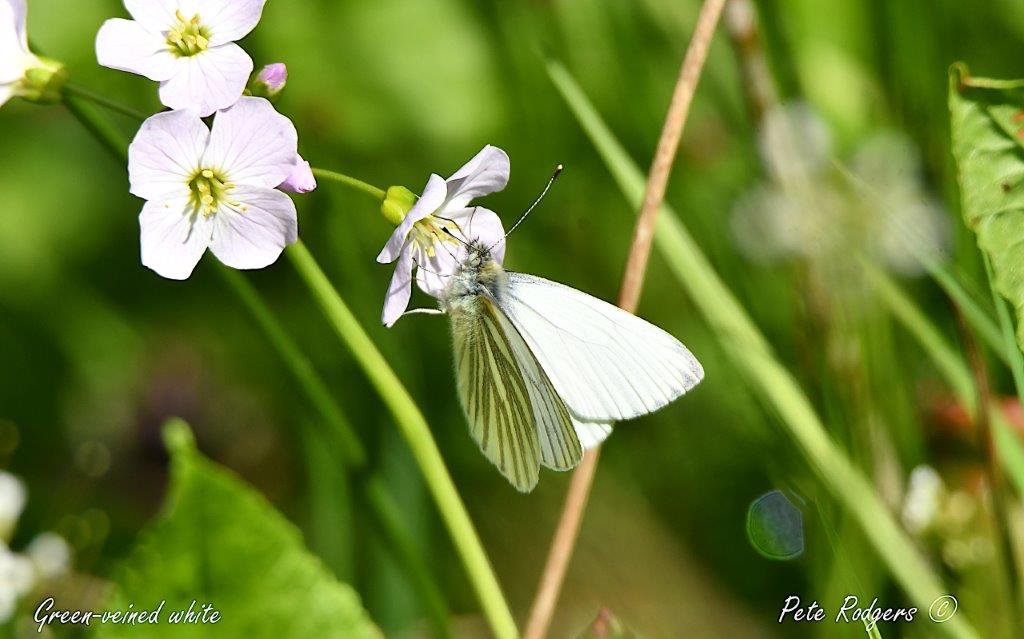 Male orange tips are very obvious, being the only white butterfly with…er…orange tips to its wings. Females lack this decoration but there is a good chance that a small white butterfly seen in April will be the female of the species.

If not an orange tip then it could be a green-veined white, which are on the wing now and can often be found in similar habitat. Both butterflies have a liking for lady’s smock, a pale mauve-coloured springtime plant, sometimes called cuckoo flower. Indeed, for both the plant is a source of food for their larvae.

And to confirm that spring is moving forward I have been seeing the first holly blue butterflies of the year passing through the garden. Any small blue butterfly in urban surroundings in April will be a holly blue.

I regularly follow bird reports from other areas, on the internet, to keep up to date with avian movements. This is particularly interesting at this time of the year as one can follow the progress of the arrival of our summer migrants.

First reports are from southern counties and gradually reports come from further north, thus allowing me to track the northerly movement of our summer visitors.

Sand martins have been around since mid-March, then the first swallow appears. House martins are now being reported but it is still a few days early for that real master of the air, the swift.

Swift numbers are in decline in the UK but we should see them at the end of April, assuming they do manage to make it to our shores.

Another early arrival is the wheatear. Charming, thrush-like birds, they start to arrive in March, moving northwards to breed in wilder places such as moorland in the Pennines and Scotland. They can often be seen on Cleeve Hill as they take a break from their northerly migration to rest and feed up.

It was for that reason that I found myself on Cleeve Hill a few days ago.

I elected to walk south, along West Down, hoping to find one or two on the Cotswold stone walls that form the boundary to the Down. But try as I might, I was out of luck.

I did see a distant group of three roe deer and managed a record shot of them before they moved off. A trio of grey herons passing overhead was unexpected; less unusual was the red kite that suddenly appeared, offering only a silhouette image against the rising sun (not the pub!!). 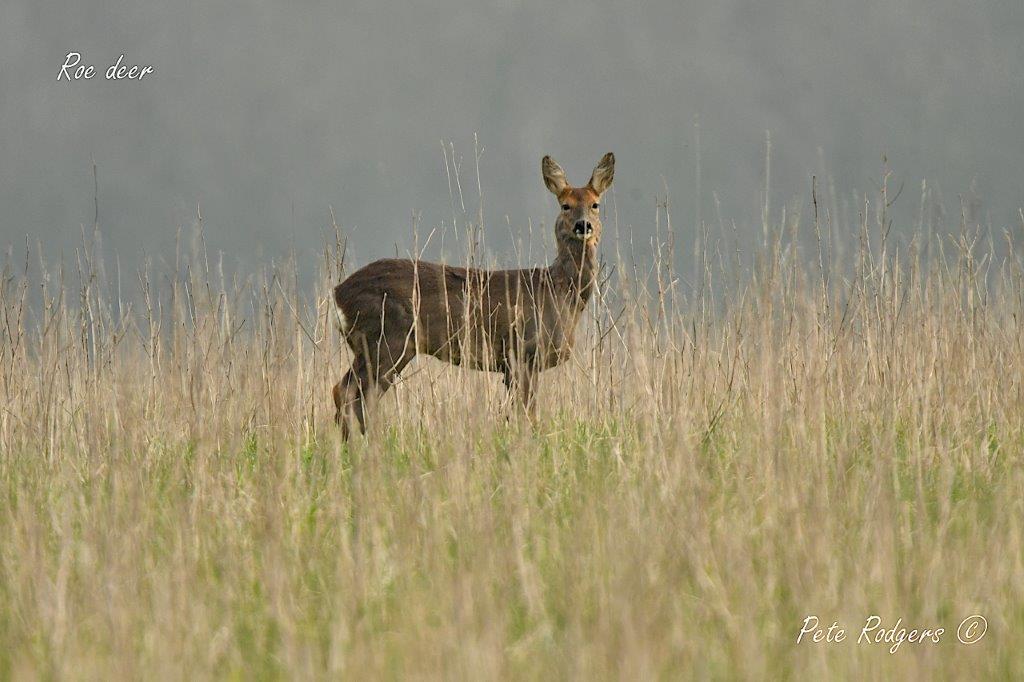 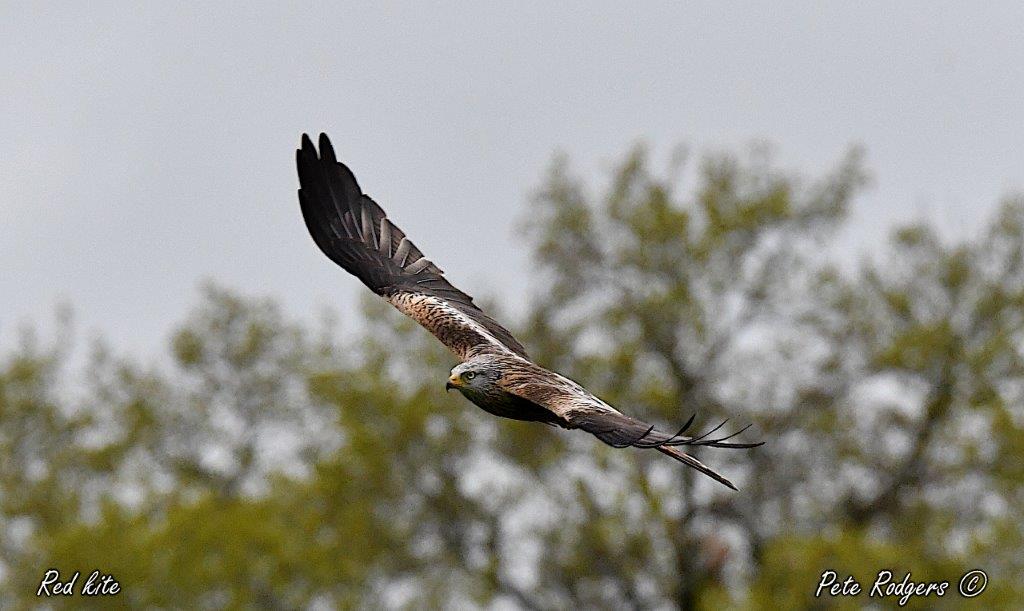 I was however, pleased to see a number of small birds that can generally be expected to be found on the hill. Linnets, stonechats, yellowhammers, meadow pipits and skylarks were present in small numbers.

For me, the song of the skylark is the epitome of a summer’s day. This small brown bird rises ever higher into the sky singing its song for all to hear and enjoy. Of course, that’s from a human perspective and it would be quite wrong to think that other birds find it so pleasurable, except, of course, Mrs Skylark. How could she fail to be wooed by his dulcet tones? 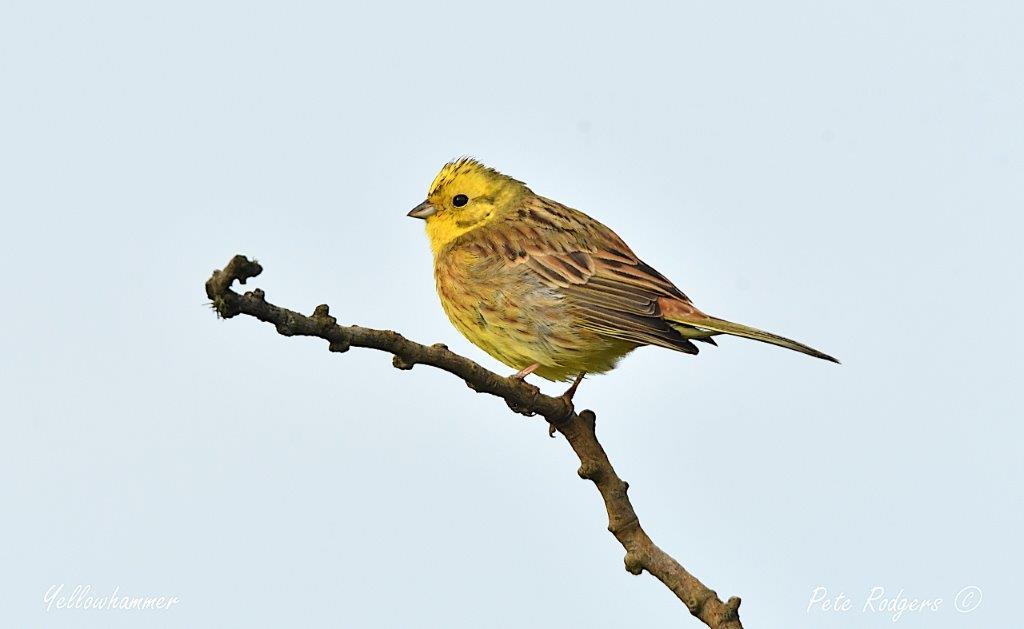 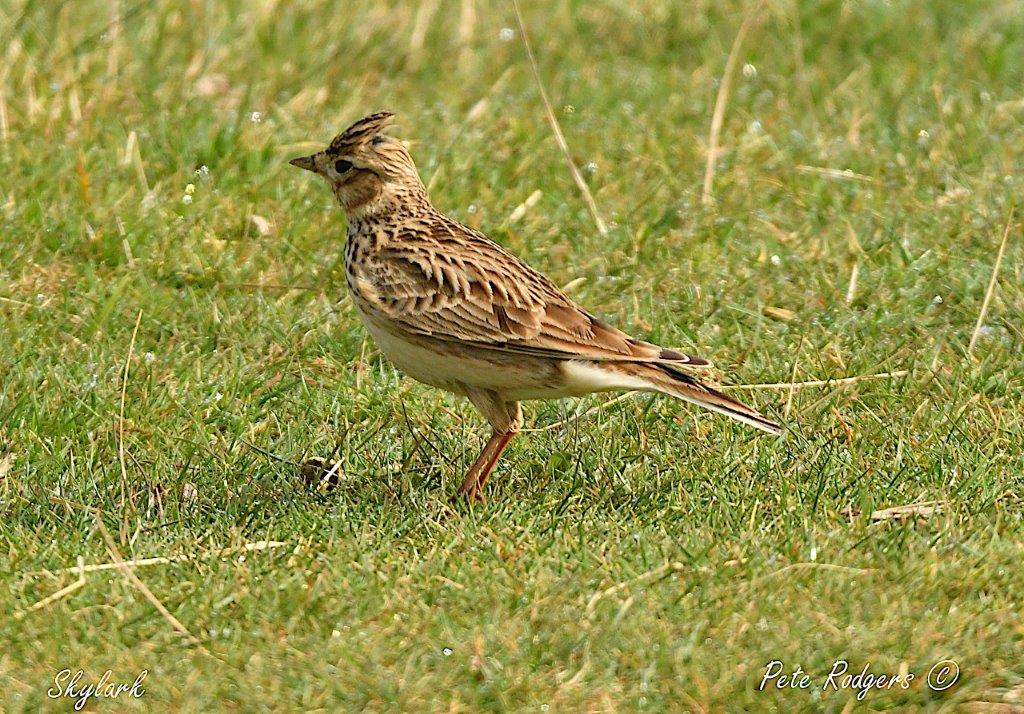 Male yellowhammers (or perhaps yellow buntings to be more accurate) were looking stunning in their breeding finery. I recently saw them referred to as the Cotswold Canary, a most appropriate name for the brightly plumaged bird.

Still without a wheatear to my name, I felt I had second prize with respectable photos of yellowhammer and skylark. Little did I know that a bigger prize awaited me on my return to my car at the radio masts.

Diverting via the dew pond, I headed for the masts and saw ahead of me a loose circle of about half a dozen people with binoculars and telescopes, obviously looking at something on the ground within.

As I approached I could see that the object of the attention was a dotterel. I approached a man and his wife and commented ‘It’s a dotterel’. His reply was ‘No its not, its two’

Sure enough a pair of dotterels were feeding on the grass within the loose circle of watchers, finding grubs and insects to replenish their food reserves whilst also taking a rest from the rigours of flying.

Dotterels are classed as wading birds and belong to the same family of birds as the ringed and grey plover. They spend the winter in north Africa, moving north in spring to breed on high ground in the Scottish Cairngorms and northern Scandinavia. 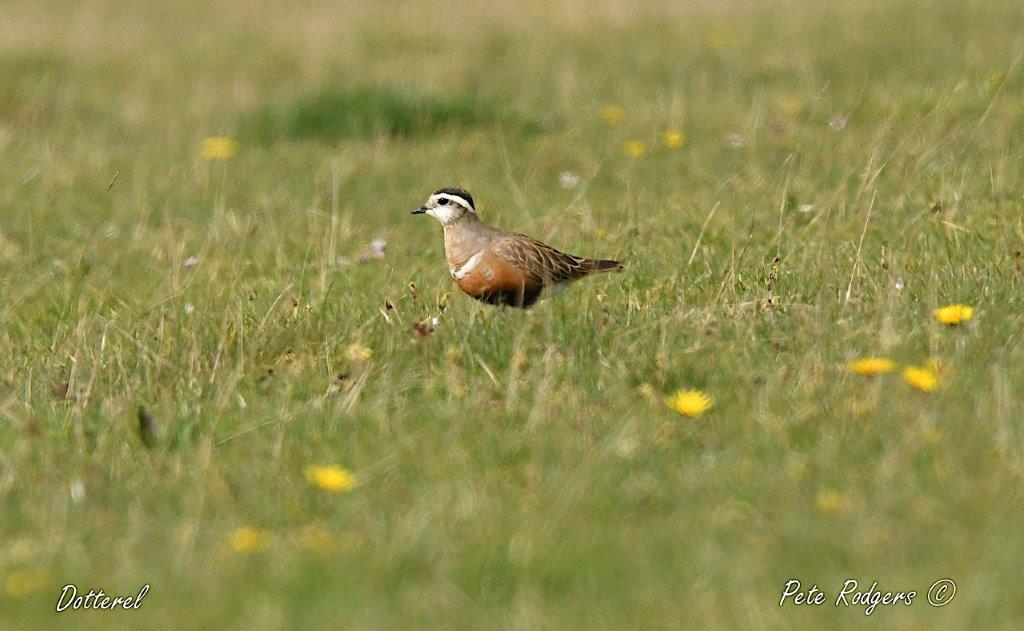 They are extremely rare in Gloucestershire, only occurring on migration. The last ones were sighted eight years ago. This pair spent about two hours on Cleeve Hill before moving on so undoubtedly, although word got out of their presence, there would have been many disappointed birders who arrived too late to see them.

For me, it was pure luck to bump into these birds. They were the first dotterels I’d ever seen and it’s quite out of the ordinary for me to enjoy such luck locally.

Such is the lot of bird watchers in particular and nature enthusiasts in general. Its often the unexpected that makes it all worthwhile. Luck undoubtedly plays its part…being in the right place at the right time. ‘You should have been here five minutes ago’ is a phrase I’ve heard more than once.

As someone whose name escapes once said ‘The harder I try, the luckier I get’. Oh that I had more time to try harder!