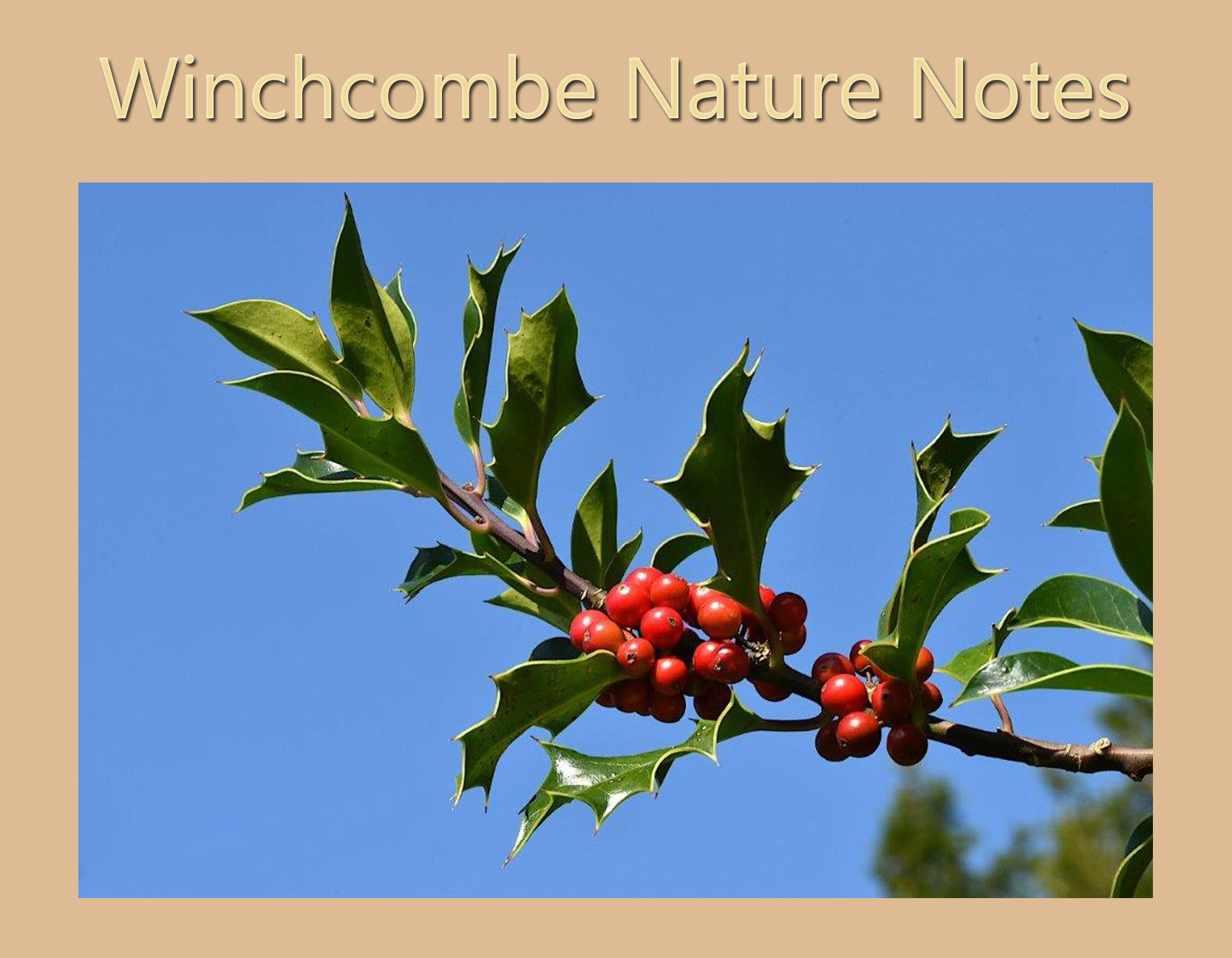 I’ve previously said that Winchcombe is not a hotbed for natural history but this view might be wrong in just one respect. Many Winchcombites (or Winchcombers or whatever we call ourselves) will have seen a white squirrel around the town and its environs. Indeed, a number of sightings have been reported and photographs posted on local social media.

I photographed a white squirrel in 2011 close to my home and saw it on several occasions. I also recall a number of ‘white squirrel photographs’ being entered in the photographic section at that year’s Country Show. 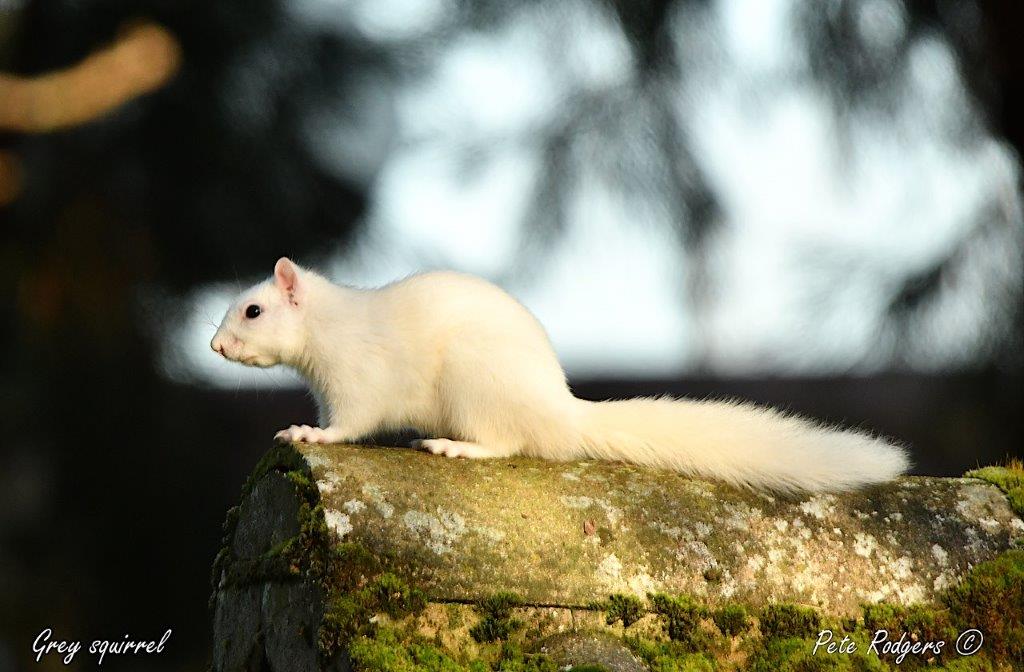 Then the creature disappeared off my radar and I never saw another until earlier this year, in the same location. Two brief sightings were all I could muster but I was very much aware of townspeople once again reporting a white squirrel or squirrels.

I was keen to get a photograph but as sightings were somewhat erratic it seemed obvious that I had two options…a long stake-out or a stroke of luck. I decided to await the second option and it arose just as my last Nature Notes were published.

My neighbour gave me the tip-off that a white squirrel was in trees across the road from my house. Quickly grabbing my camera, and still in my slippers, I got out in seconds. Although it wasn’t too difficult to pick up, it stayed high up in the trees and was extremely mobile, moving quickly and effortlessly from tree to tree.

After some twenty minutes all I really had were a few record shots and I was beginning to think that my chance of something more presentable had gone.

But for once, luck was on my side. The squirrel came closer and moved lower down the tree and I was able to get some shots that made my efforts more worthwhile.

The squirrel is a white version of the commonly seen grey squirrel. It is white as a result of a gene mutation known as leucism. Leucism occurs in many creatures, either in part or whole. For example, in the 1970’s I visited the town to photograph a partially leucistic blackbird that had a territory near the bridge at Riverside. 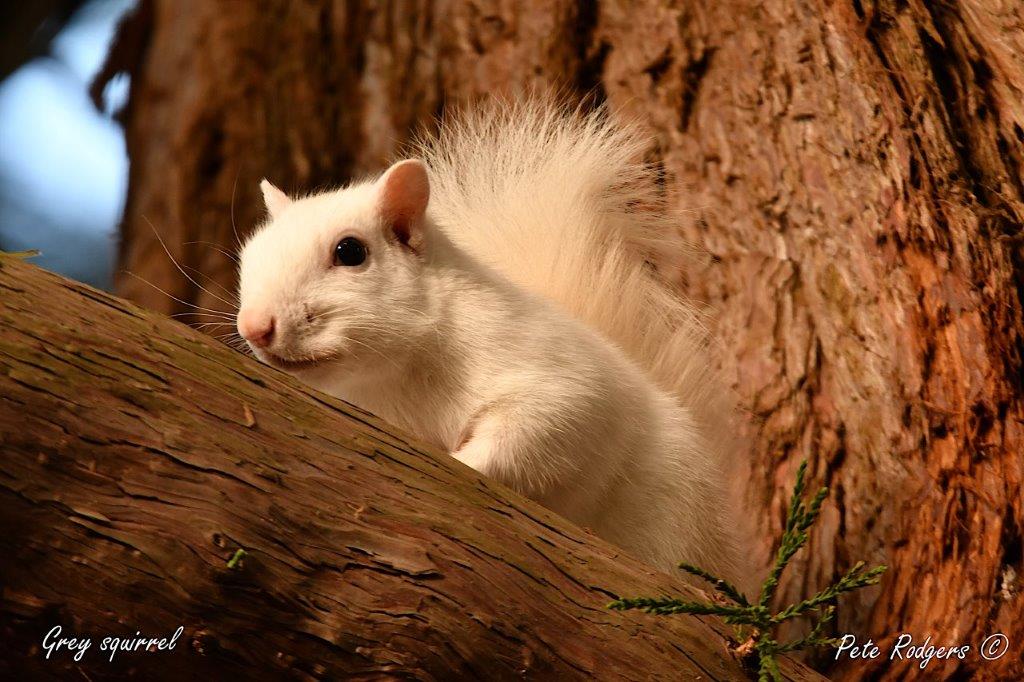 Many would assume that a completely white squirrel must be an albino but an albino would have pink eyes and may also suffer eyesight defects as a result. Leucism does not affect an animal’s eyes or its eyesight.

It seems clear to me that ‘my’ white squirrel is not the only one in and around Winchcombe. Indeed, I have seen two reports of two white squirrels together and the spread of sightings would indicate multiple whites to be in existence.

I believe it is quite possible for leucistic squirrels to breed and for their offspring to look like any other grey squirrel. That would depend on whether or not the gene mutation gets passed on.

I found a website collating information across the country on the presence of leucistic and albino grey squirrels. Of four entries for Gloucestershire, three came from Winchcombe and the fourth from Cheltenham. So perhaps Winchcombe is a local hotbed for this natural curiosity.

An interesting find in the garden recently was the caterpillar of the large yellow underwing moth. It was found in the leaf litter when tidying up the garden for winter. It would have stayed there in that form throughout the winter before pupating in the spring; the adult moth emerging in about June and remaining on the wing throughout the summer. 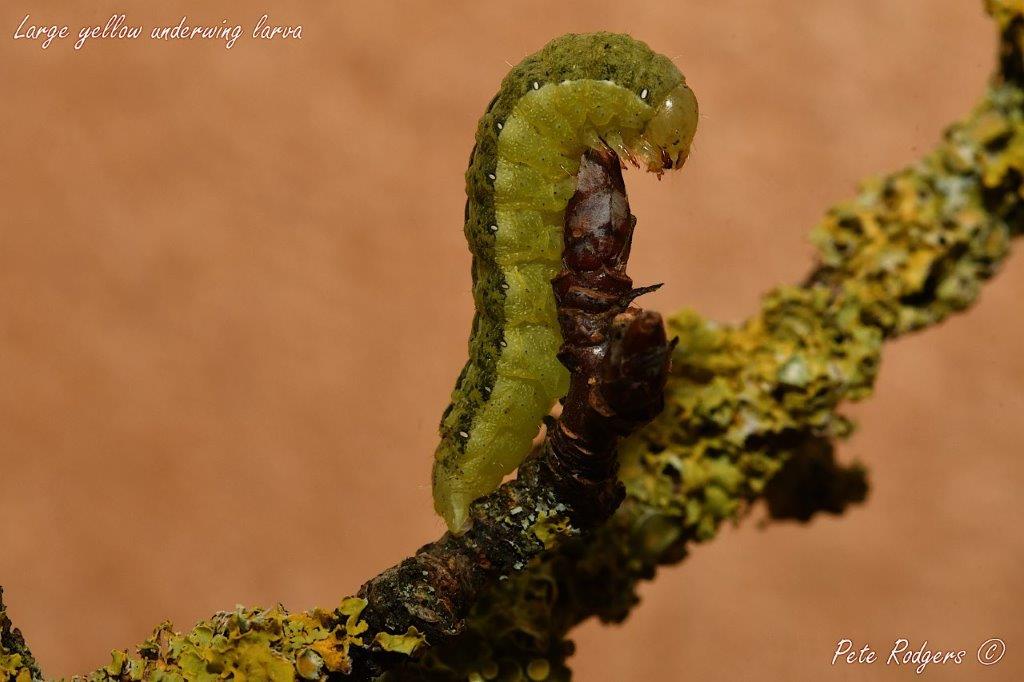 Perhaps this indicates that we should not be so fastidious in our efforts to achieve order in our outdoor spaces.

This caterpillar belongs to a larger, more general grouping, known as cutworms. These are larvae that live on the ground and eat through plant stems, causing plants to wither and die. Large numbers can be annoying for the gardener but a singleton might well pass without notice, depending upon which plant it takes a liking to! 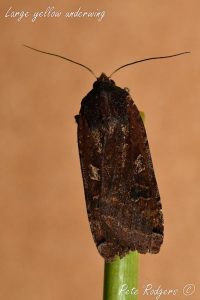 I have occasionally disturbed the moth in the garden. Well camouflaged when it sits with its wings tightly closed during the day but the flashing of its golden-yellow underwings as it flies away to find another hiding place is guaranteed to catch the eye.

I have tried to photograph the moth showing its underwing colouration but it sits tight with its upper wings tightly folded and no amount of encouragement can persuade it otherwise.

(My thanks to Roger Wasley for helping with the identification of this caterpillar.)

Bird visits to the garden have been very erratic. Some days nothing at all, then things can change suddenly.

I had put some windfall apples on the lawn in the hope of attracting some thrushes but it wasn’t until I cut the apples in half that I got any response.

One morning they were being attacked with gusto by seven hungry blackbirds, a small starling flock and a female blackcap for good measure. 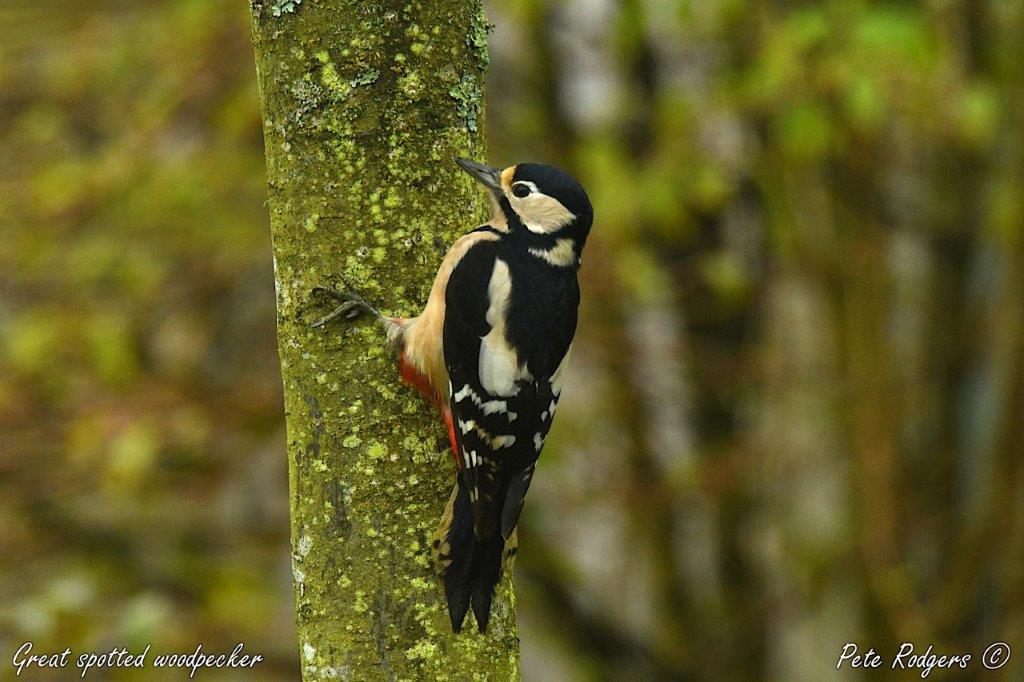 The kerfuffle caused by three starlings finding the fatballs and all trying to get onto them at the same time attracted the attention of a great spotted woodpecker. I didn’t see it arrive but suddenly it was on the tree trunk, taking stock of the happenings. It stayed long enough for a brief photo session, then realising it was outnumbered gave things up as a bad job and disappeared as quickly as it had arrived.

Within a few days the apples had been reduced to empty shells.

Birds feeding on the apples offer photographic opportunities although the key is to try to avoid getting the apple in the picture! Sometimes easier said than done. 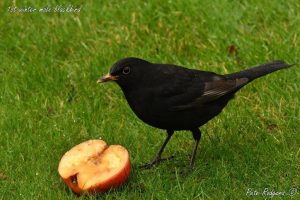 My photograph of the blackbird and apple shows what I mean.

Interestingly this shows a first-winter male, meaning it was hatched this spring. Initially, as a juvenile, its bill would have been black. This bird still shows some black on the bill and also the paler patches on the wings. Eventually, its bill will become the beautiful orange-yellow of the adult male and its plumage jet black.

Starlings are absolutely stunning birds in their winter plumage. Seen close to they are not just black birds. Their slightly iridescent feathers are covered in spots and flecks of white and cream.

I was really pleased to see the starlings as are they are now fairly rare visitors to the garden. In my childhood they were commonplace and, as such, not given a second glance. There used to be a small winter roost of starlings in the trees across from where I live but that disappeared many years ago.

However, I am starting to see more starlings around Winchcombe than for many years and that’s good news.

Of course, they are perhaps best known for their pre-roost flights, or murmurations. The birds form into a vast flock, thousands strong, and perform an aerial ballet. The dark cloud of birds is constantly changing shape as the flock twists and wheels through the sky, making a myriad of shapes and patterns to entertain watchers on the ground. 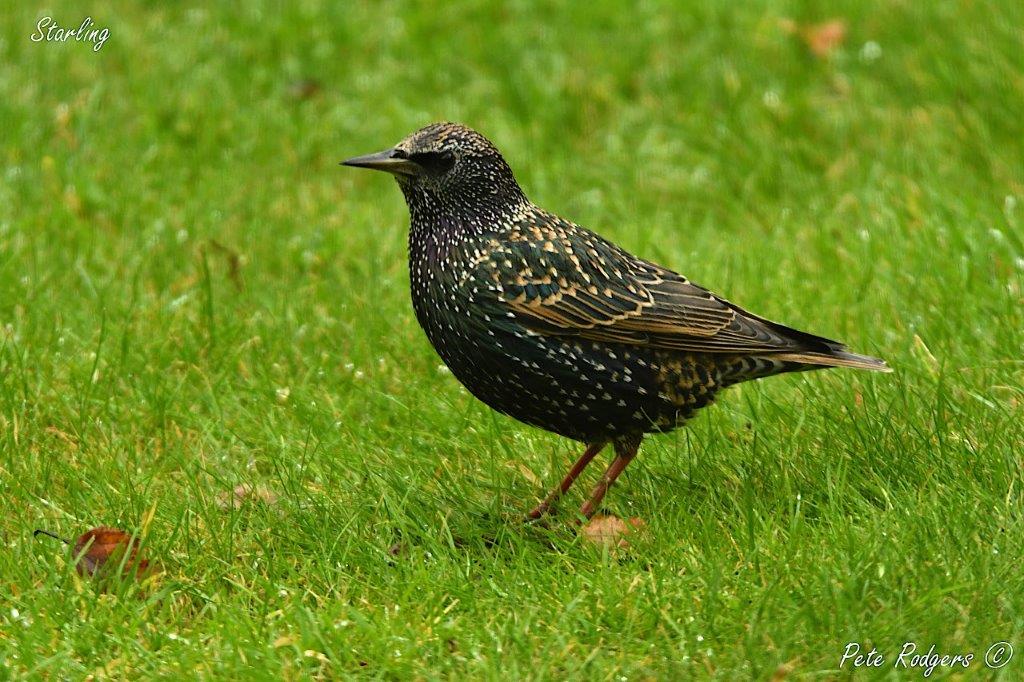 Then, on a hidden signal the flock funnels earthwards to disappear into the chosen roost for the night and suddenly it’s all over.

Starlings have their favourite areas for roosting and there are one or two sites along the Severn estuary. Ham Wall, in Somerset, is another well-known site and attracts many watchers over the winter months.

And finally, a reminder to anyone with feeders in their garden. Give them a Christmas present in the form of a good clean. Feeders and nest boxes can harbour infectious bacteria and other nasties that birds will pick up, doing them no good whatsoever. So, don’t undo all the good you’ve done with the feeding of the birds by allowing them to get an infection from your feeders!