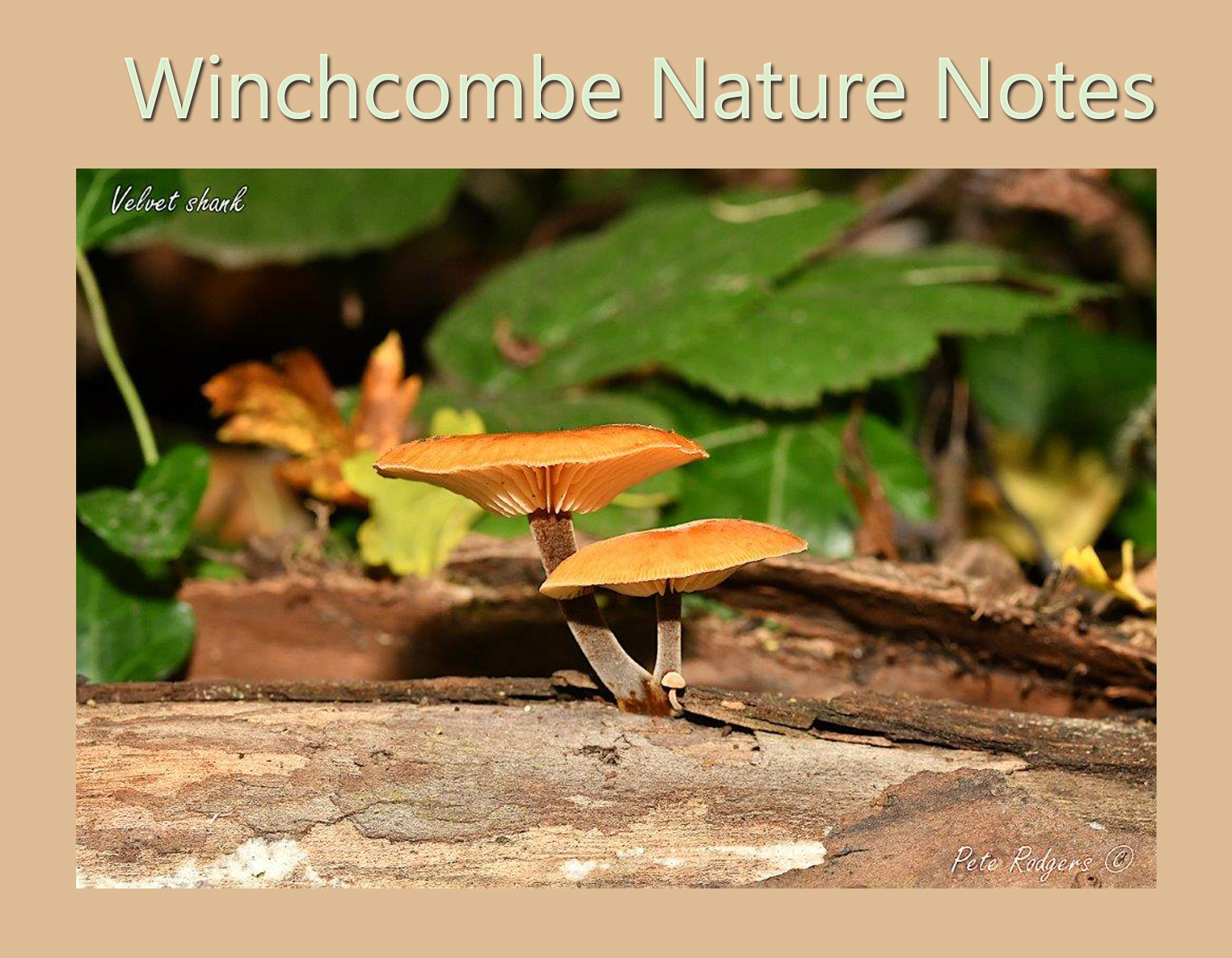 As autumn moves inexorably into winter, Nature Notes for November takes on a ‘chilly’ note.  Our wildlife will be making its own preparations to survive the worst of the weather that the season will throw at it.

It’s amazing to see some of our summer plants still hanging on in the roadside verges. Nothing spectacular, just the occasional singleton refusing to give up. I’ve recently seen common plants such as herb Robert, red campion, white deadnettle, meadow cranesbill, hogweed, daisy and dandelion showing their somewhat battered faces. The hogweed was still playing host to a couple of late season insects!

But autumn is the season when fungi (mushrooms and toadstools) really come into their own.  Remarkably there are about 15000 species of fungi in Great Britain. I know practically nothing about fungi except that some are edible, some inedible and some downright poisonous. I get mine, therefore, from the supermarket. 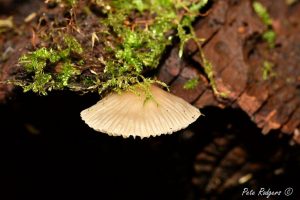 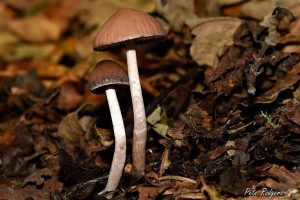 However, they do make good subjects to photograph although it often means getting down to ground level to get the best shots. Then I try to put a name to my subject which is not always easy. Inevitably, with so many species, there are many similarities.

Sometimes it may be necessary to examine the gill structure beneath the cap or even to cut into the fungi as the flesh of some species   discolours upon exposure to the air. I can’t really be bothered to go that far as to leave the fungi in situ and undamaged means that it can fulfil its function and still be there for others to enjoy. 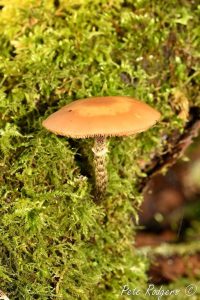 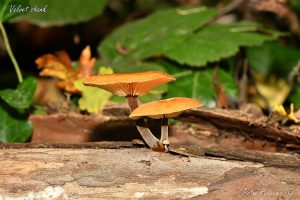 Interestingly, the mushroom or toadstool we see is only the tip of the iceberg. It is the fruiting body of a plant which has an extensive hidden root system which transfers the nutrients from decaying plant material back into the soil for other plants to utilise.

My photograph of Velvet Shank was taken with the aid of flash. It was found growing on a log in the bottom of a hedgerow in Castle Street. It shows that there is beauty and colour in the most unlikely of places just waiting to be discovered.

The Birds Have Flown!

The flock of small birds coming to the garden feeders that I mentioned in September seems to have gone walk about. The garden remains extremely quiet despite the feeders, which remain stubbornly full.

Only the occasional blue tit takes advantage of them and the goldfinch flock, which usually gorge on the sunflower hearts, has only made a couple of visits so far. With plenty of natural food to be had and many people putting out birdfeeders, the birds have an abundance of choices from which to select their preferred dining table. 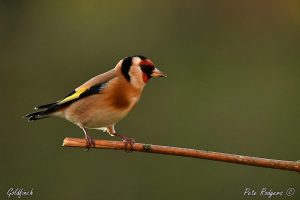 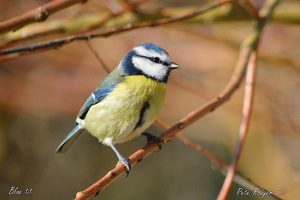 I have seen reports of a general decline in our garden birds and reasons for this could be many. Bird populations naturally vary up and down but with so much wildlife seemingly on the decline it does start to become rather worrying. The hand of man is almost certainly behind it, our way of life and how we use and abuse Planet Earth.

Butterfly Conservation has just produced the results of this year’s Big Butterfly Count, a survey carried out by the general public of butterflies seen over a fifteen-minute period in a garden or other fixed area.

It is, of course, a little unscientific, but nonetheless provides some useful year-on-year data which over time will indicate important trends in population changes. Of seventeen butterfly species targeted in 2020, twelve showed declines on the previous year.

Three species, however, showed outstanding increases on last year’s figures. The large white, brimstone and holly blue all recorded increases in excess of 40%. I commented on the increased occurrence of the holly blue in my notes at the end of April so I’m not surprised by that result. Unfortunately, the flight season for the orange tip, which I also felt was much more common this year, has passed by the time the count is conducted so it misses out entirely. 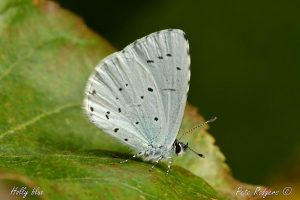 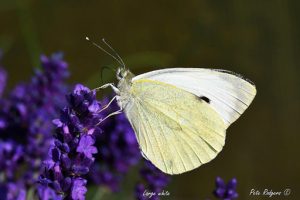 Sadly, at the other end of the scale the small tortoiseshell showed a 41% reduction on 2019.Whatever the results, the count does cause people to engage more with nature and this can only be good in the longer term.

In one my earliest ‘Notes’ I commented on the construction of ‘leaky dams’. These are basically obstructions placed across a river or stream to slow the water flow. Consisting of lengths of tree trunk and branches, they are sufficient to retain water higher up a water course whilst allowing enough to escape through the gaps at a slower rate and thus reduce the risk of flooding downstream, as was experienced locally in 2007.

This is referred to as Natural Flood Management and a considerable amount of work has taken place locally. Directed by Worcestershire County Council some 80 installations have been created in the Isbourne Catchment Area. In addition to leaky dams, this figure includes other storage areas such as ponds and scrapes.

Over time this should produce further wildlife habitats as well as providing more immediate relief from the horror of flooding for those living close to the water course.

Once vegetation establishes itself around ponds creatures such as dragonflies, damselflies and other insects will appear. Expect newts, toads and frogs to take advantage; also birdlife such as moorhens and mallards. Smaller songbirds will use ponds as a source of drinking water as they do with the pond near the radio masts on Cleeve Hill. Here I’ve seen yellowhammers, meadow pipits, linnets and wagtails quenching their thirst.

To finish I should make mention of an unusual find near Littleworth. On a walk I came across the body of a polecat on the grass verge, surely the victim of roadkill.

My initial thoughts were that this was a mink, as these are known to be present in many parts of the country as a result of escapes and illegal releases. However, mentioning my discovery to a friend, she commented that not only had she seen the victim but had photographed it as well. Closer inspection of the photograph revealed the identity of the hapless creature to be a polecat.

In my childhood polecats were rare animals as a result of persecution and habitat loss. Mainly restricted to the wilder parts of Wales, they have made an impressive recovery and now inhabit many parts of the Midlands and southern England. Re-introductions in the north-west have allowed the species to make inroads into southern Scotland.

Polecats belong to the Mustelidae family which also includes the stoat, weasel, pine marten, mink, otter and badger. It’s a group of animals that I have found particularly elusive over the years. If disturbed they usually make themselves scarce pretty quickly.

I remember a few years ago enjoying a prolonged viewing when I chanced upon a stoat with a fresh rabbit kill. The rabbit was large and heavy and although the stoat must have been aware of my presence it was determined not to give up its prey. By standing stock-still, I watched as the stoat struggled to drag the dead-weight rabbit from one side of a wide tree-lined track to the other, and then into the undergrowth and out of sight.

And whilst staying at a B&B in Glen Coe being entertained by the host whilst he fed digestive biscuits to a local pine marten. A really beautiful creature, it came at the appointed hour to collect three biscuits from the kitchen windowsill. Two were taken back to its nest whilst it stayed to eat the third in front of me.

Such cameos make wildlife watching so rewarding and more than make up for the blank days, of which there do seem to be too many.