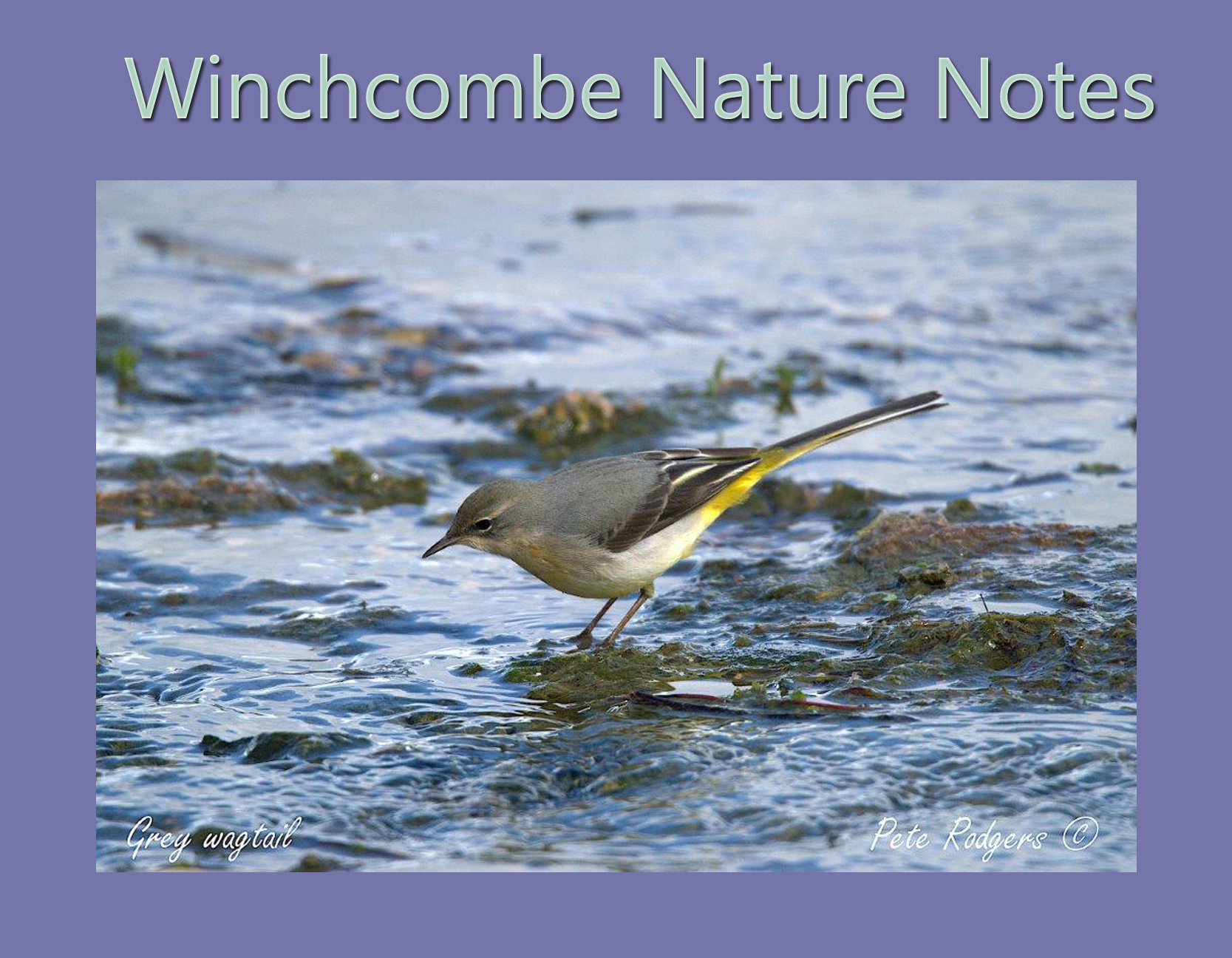 Summer has moved inexorably into autumn and at last some our native trees are starting to develop the colours most associated with this time of year. With warmer temperatures, however, the best colours occur in November when trees such as the beech look their best.

There is a beautiful tree in the Greet Road cemetery, and clearly visible from the highway, with leaves initially a rich golden colour but now becoming darker and brown. I was unsure as to its identity so a slight diversion into the cemetery was necessary. 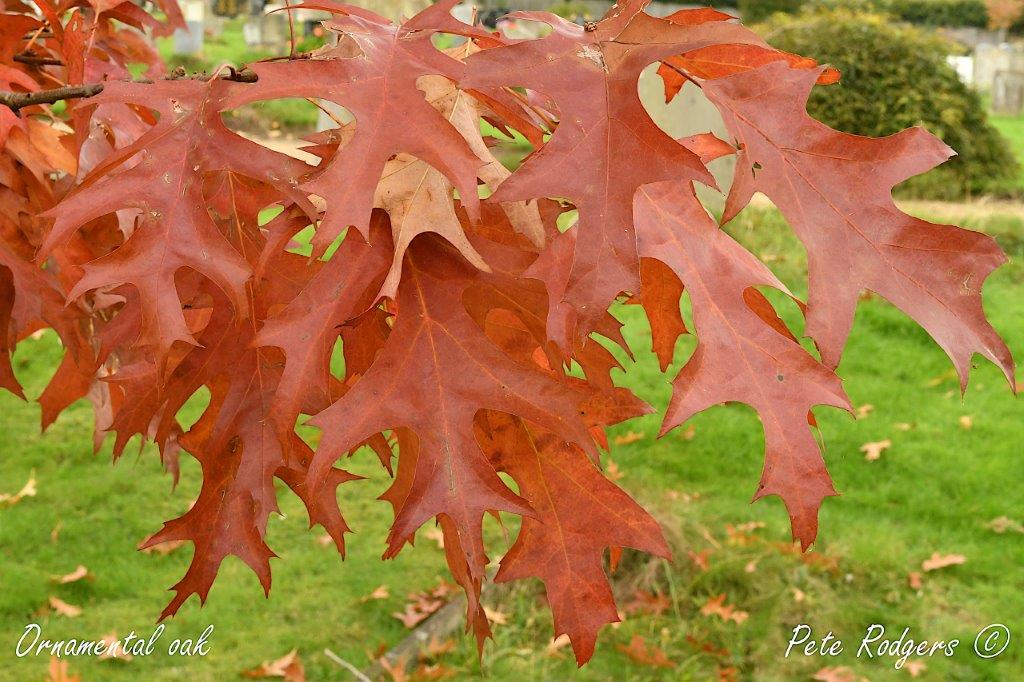 My thoughts were confirmed as it proved to be an oak tree. Not one normally found in the wild in the UK but an import. Its very large, typically scalloped leaves left no doubt. Unlabelled, unsurprisingly, I could go no further than allocate it the title of ‘ornamental oak’.

As to its age I can only guess at between 20 and 30 years. But to whoever planted it, thank you. It certainly gave me a lift.

And that’s the thing with tree planting. So often it’s the following generations that will reap the pleasures and rewards from trees planted today. Trees will take many years to reach maturity, easily outliving many of us around today. If we can leave our children and grandchildren any form of legacy worth having, plant a tree!

Autumn so far has been quite dry and temperatures have been above average for the time of year (so the weatherman tells me). This probably helps to account for some of the flowers still hanging on in the hedgerows and verges.

A walk along the Old Brockhampton Road to Waterhatch recently provided some late season interest for me. 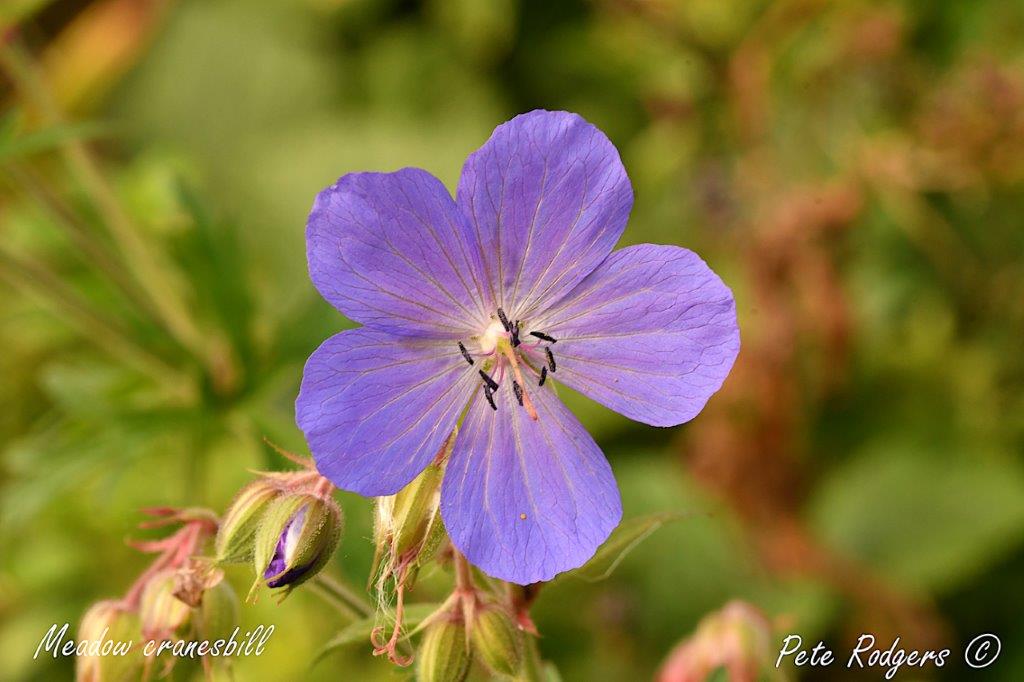 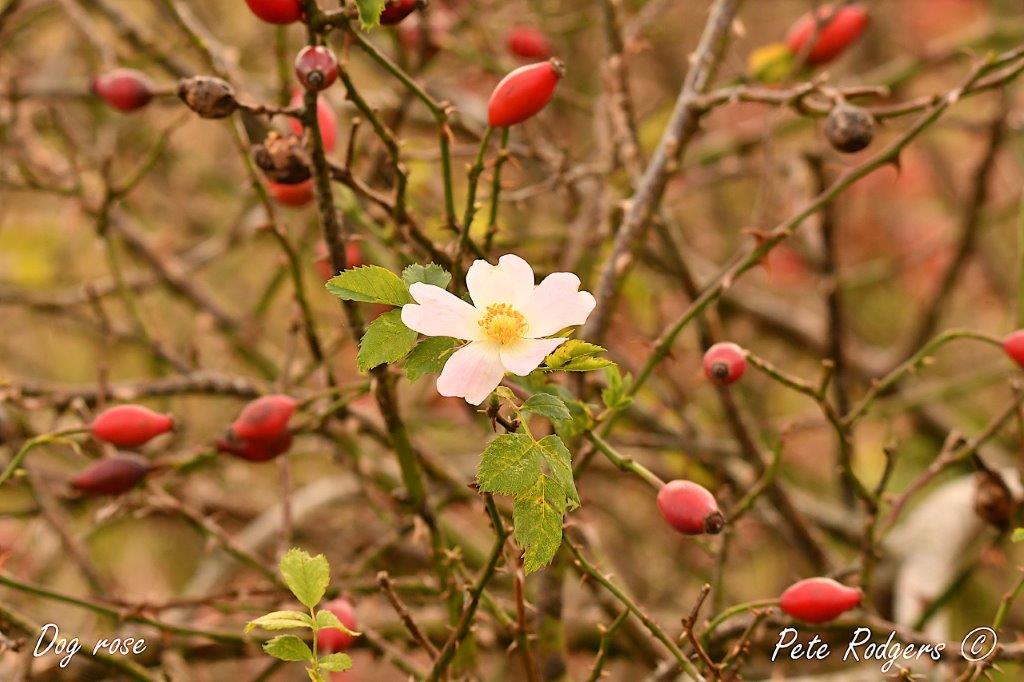 A meadow cranesbill was in bloom as was a hedge woundwort and further afield I encountered a dog rose bloom surrounded by a fine collection of red hips. I’ve also noticed white dead-nettle trying to make a come-back and the odd dandelion is enjoying a late flush.

All of these flowers will get cut back by the frosts when they arrive, as they surely will. But for the time being I’ll enjoy them while they remain.

Waterhatch produced a couple of interesting insects. Well one insect and one arachnid.

Arachnids have eight legs and are commonly seen in the form of spiders. My find was a creature known commonly as a harvestman, a name given by most people to these small bodied but long-legged creatures. Members of this type are often found indoors and may be referred to by some as daddy-long legs or cellar spiders.

I’ve always considered daddy-longlegs to be crane flies but fully understand how this name came to be applied to the harvestman.

Harvestmen are not true spiders but are classified as Opiliones. They lack venom and silk glands so do not make webs. They only have two eyes, whereas most spiders have eight! And when they come under attack from a predator, they are able to shed a leg which will continue to twitch for some time. This will distract the predator, giving the harvestman time to escape.

Well, that’s the theory. The downside is that the leg will not regrow but with seven more it’s unlikely to seriously affect the little creature.

My insect find was a sabre wasp. I first saw it buzzing around the pile of cut timber at Waterhatch and initially thought it was a dragonfly, although dark and somewhat on the small side. When it landed I got a proper view and realised that it was clearly not a dragonfly. 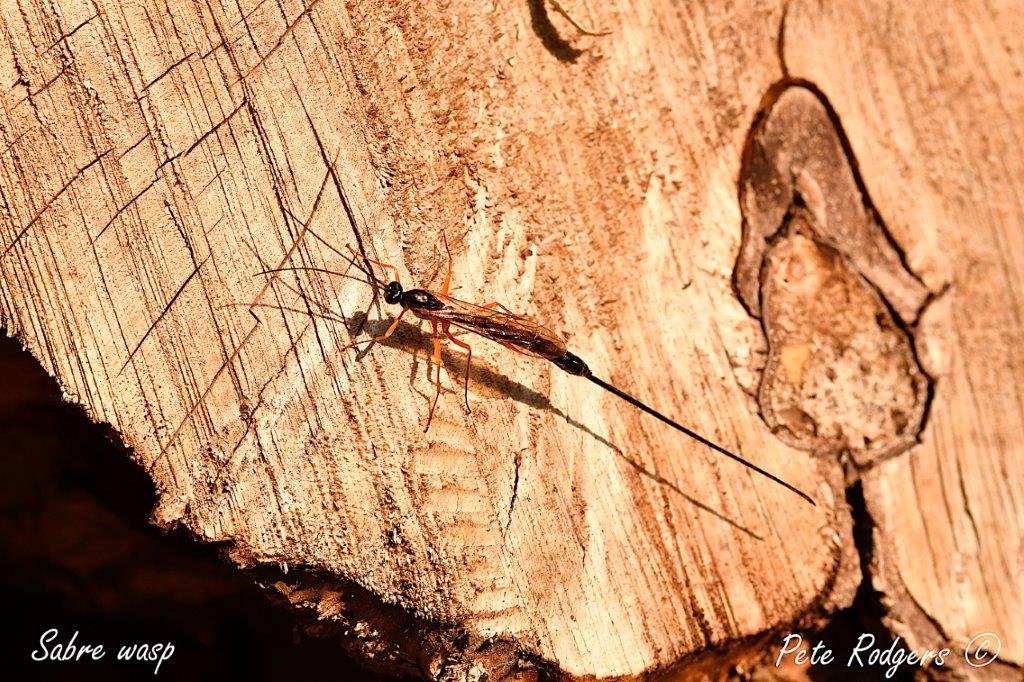 The sabre wasp has a body length of up to 40mm and the female has an ovipositor even longer. My find was clearly a female.

I have encountered this creature only a couple of times in the past and was pleased to be able to get a photograph as it landed on the timber pile.

The sabre wasp is an ‘Ichneumon’, a parasitic wasp that preys upon the larvae of other wood boring insects. Its favourite prey is the larvae of the horntail wasp. The female can smell the scent of these larvae deep in their tunnels as they feed on wood the inside of the tree.

She then drills down into the wood to locate the individual larva and paralyses the hapless creature by stinging it. She will then lay an egg in or on the larva which, when it hatches, will proceed to feed upon its host. Eventually the sabre wasp larva will pupate and emerge as an adult to continue the cycle.

Surely a drama to challenge anything seen on Eastenders.

It was while at Waterhatch that I suddenly heard a voice behind me asking me what I was photographing. Had I stepped off the footpath and incurred the wrath of the landowner? I needn’t have worried as the questioner was someone of similar age driving an electric mobility scooter over the stoney track.

It transpired he lived up the hill and was an entomologist in his working life. He was particularly interested in the sabre wasp and even went so far as to give me its scientific name. We had an interesting chat about our surroundings before we bade farewell and went our separate ways. Another little cameo on my afternoon out.

I’ve seen a grey wagtail on the Isbourne at Castle Street on a couple of occasions in the past month. 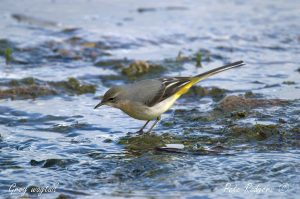 These charming little birds are creatures of fast flowing streams and shallow rivers where they can stand on stones before flitting off to catch a passing fly, often returning to the same vantage point to repeat the process. With blue-grey upperparts and lemon-yellow underparts they are smart birds, especially males when they have completed their moult.

It was while walking along the Riverside Path between Castle Street and Riverside that I encountered a couple of teenage boys trying their hand at fishing.

Having been a keen, but not very good, angler in my teens I was interested to talk to them. I have seen fish in the Isbourne in Castle Street before, but not for some time and only been able to guess that they may have been small river trout.

Sure enough, they told me that they were fishing for brown trout. To prove their point, they caught one just as I was leaving. I did an about turn and watched as the lad reeled in a trout about eight inches long. Its flanks were beautifully marked with colourful dots along its sides.

It prompted me to enquire if it was not a rainbow trout but was assured it was a brown trout. He also assured me that a rodent that we saw swimming across the river was only a brown rat and not a water vole.

“We see lots of those running along the bank” he added, by way of confirmation.

I would love to have seen an action replay of the swimming rodent again. It all happened so quickly that I was only left with an impression. Water voles are now very rare animals and have been wiped out from many of our river systems. In some areas, where American mink have been eradicated, water voles are being reintroduced, with some degree of success.

I can remember seeing them in my fishing days swimming back and forth across the River Chew, my local river. Then, they never warranted a second glance.  Well, today all that has changed unfortunately.

I would have loved my sighting to have been a water vole but sadly I think my young angling acquaintance was correct as only a few days later I encountered a brown rat disappearing into the shrubbery alongside the Riverside Path. With its long tail, there was no doubting the accuracy of its identity.

Brown rats are prodigious breeders. A female can breed at three months and produce five litters a year of up to twelve young!