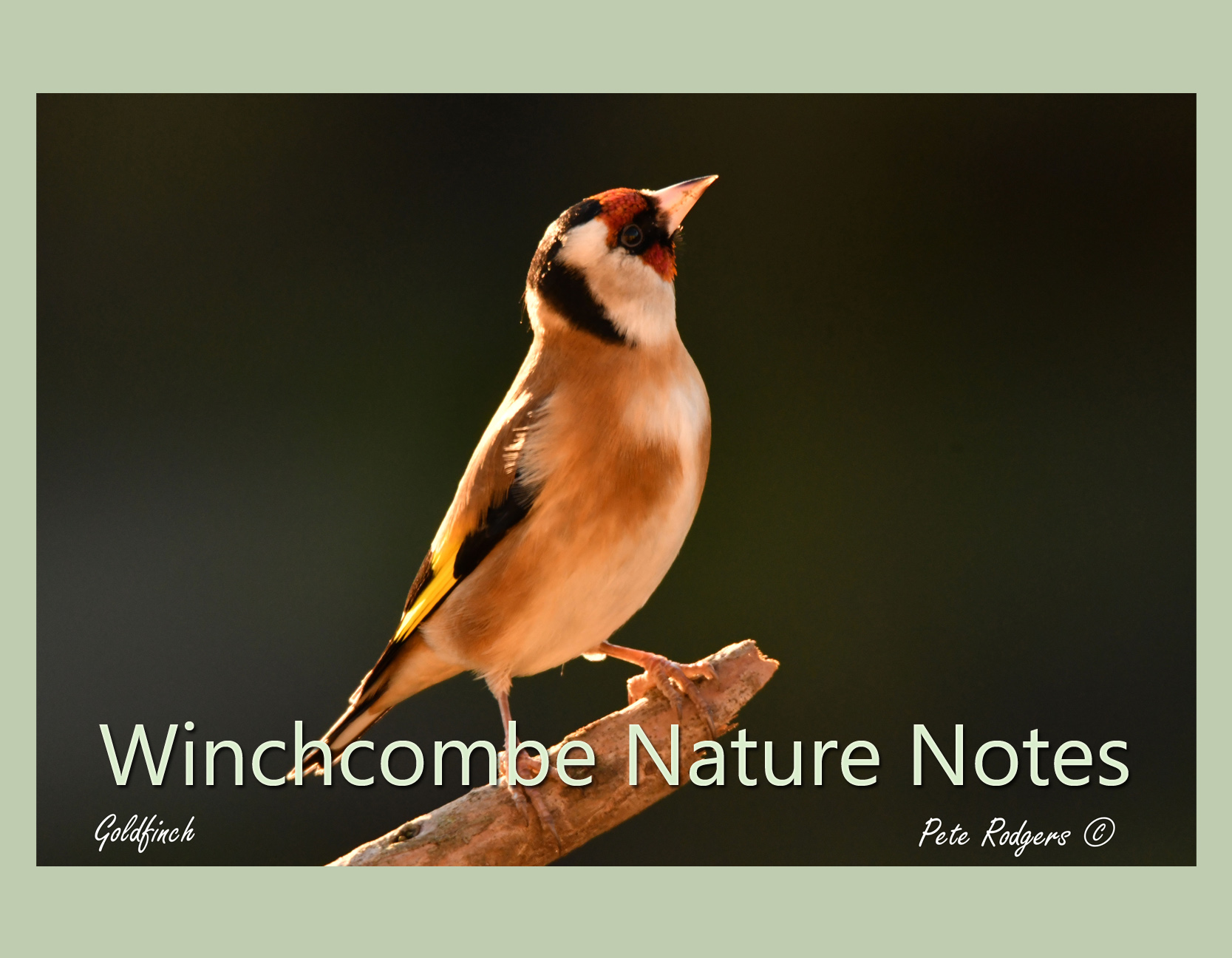 If you’re reading this edition of Winchombe Nature Notes, you will have survived the retail extravaganza that Christmas has become.  Probably spent and consumed more than was good for you and maxed-out the credit card, (well, good luck with that next month!)  But it’s only once a year and it will have created some space in the shops for Easter eggs and hot-cross buns!

In the natural world, another once-a-year happening has just occurred, namely the Winter Solstice.  The shortest day has come and gone and we can now look forward to gradually increasing daylight. Imperceptible at first but by early February the morning sky will be more obviously brighter, earlier. Nature will respond to the lengthening daylight hours, early spring flora coming into leaf and our resident birds beginning to sing again.

That said, climate change and milder temperatures have meant that snowdrops and daffodils already have their shoots above the soil. Winter cyclamen are in bud as are the hellebores in my garden.  The ‘orientalis’ cultivars are amongst my favourite plants, being in flower from January through to April.  As well as looking good, these early season flowers provide a valuable source of nectar for early flying insects such as bumble bees that nowadays seem to keep going throughout the winter.  It is not at all unusual to see one or two on the wing on mild days even in January. 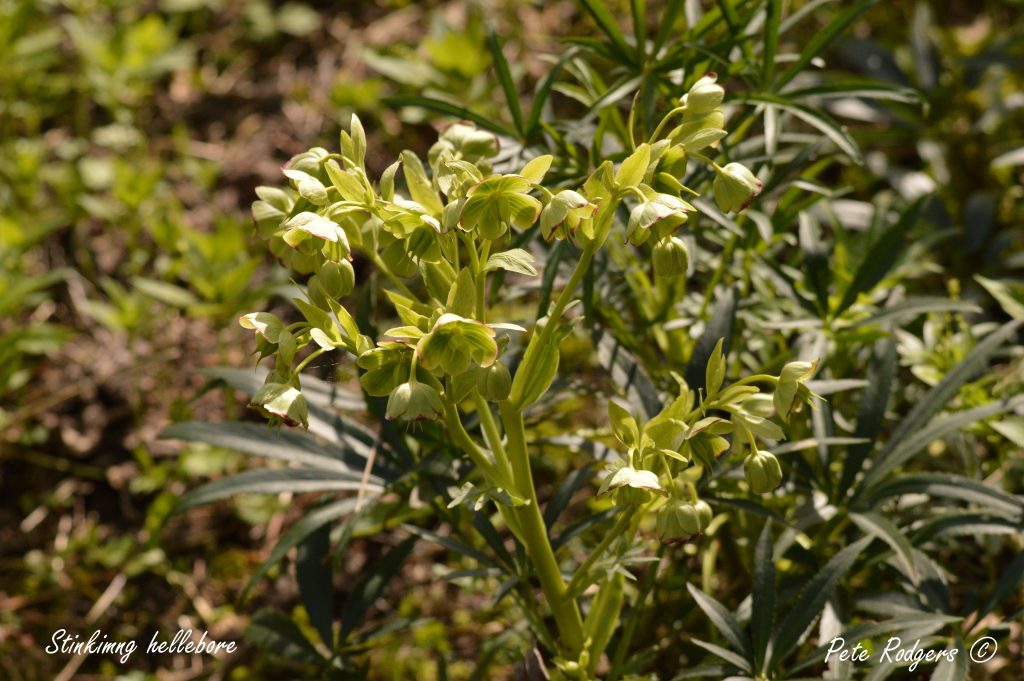 Hellebores are not just garden plants.  There are a couple of species native to Great Britain and it is always a pleasure to stumble upon them.  They are woodland plants and although not common both occur in Gloucestershire.  I’ve found the Stinking Hellebore (Helleborus foetidus) in woodland near both Winchcombe and Stanway, its deep green palmate leaves being offset by yellowish-green, bell-shaped flowers, sometimes tinged with purple.  Whoever named the plant obviously had a keen sense of smell, better than mine anyway.  The name somewhat detracts from an otherwise bright interlude on a winter woodland walk.  H. foetidus sometimes finds its way into our gardens as the cultivar ‘Wester Flisk’, which has been bred with reddish stems and deeper purple edges to the flowers.  I can’t recall finding the Green Hellebore (H. viridis) locally although it does occur further south in the county.

Avid readers of my ramblings may recall that in October I made mention of the caterpillars of the large elephant hawkmoth, found eating their way through an ornamental fuchsia in the garden.  Eight caterpillars had become four as they reached maturity and disappeared to pupate so those remaining were collected and placed in a bucket with a suitable food supply and a large handful of leaf litter.  As hoped, they went to ‘ground’ to pupate and I now have four pupae gradually changing into recognisable moths which should emerge about May.  The adult is a stunning pink and green insect, nocturnal so not seen by many.  My photograph is of one I found in my greenhouse, caught in a spider’s web by a wingtip. I was able to release it, apparently unharmed; a photograph being ample reward for a small act of kindness.

The bird feeders have been in position now for several weeks and attract a modest number of birds.  A strategically placed stick is a good prop for a photographic session, although some patience is required to get the desired image. The birds have obviously not read my script. 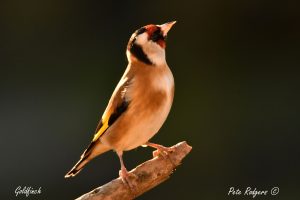 Most numerous are the goldfinches which hog the perches and gorge on the sunflower hearts. Occasionally one or two may be dislodged by one of their own or a greenfinch or two.  The greenfinch was once a very common bird but suffered a population crash as a result of eating toxic peanuts put out by well-meaning bird lovers.  So it is pleasing, therefore, to see them coming into the garden again. Always buy certified peanuts for birdfeeders and regularly clean the feeders as harmful bacteria can build up.  It is important, therefore, when purchasing a bird feeder to ensure that it will come apart to facilitate cleaning.  Not all do and these should be left well alone. 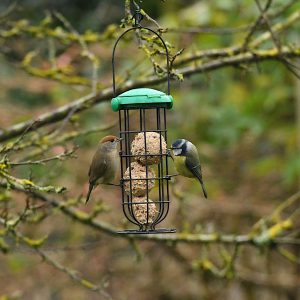 Perhaps the most interesting birds attracted into the garden recently for a free hand-out have been a stock dove, a smaller neater version of the wood pigeon and not often recorded in urban gardens, and a female blackcap.  I made mention of the blackcap in my last Nature Notes so it is especially pleasing to see one again visiting the garden.  Only the male has a black cap, juveniles and females sporting a pale brown cap.

The biggest surprise, however, involved the finding of a hummingbird hawkmoth in the garden on 1 December.  It was my eagle-eyed wife who spotted this unseasonal visitor to the garden.  I managed to find the moth the following day roosting under a rolled up sun blind above the patio doors.  This is particularly unusual as these are migratory summer moths and may be seen hovering around flowers rather like a small humming bird. 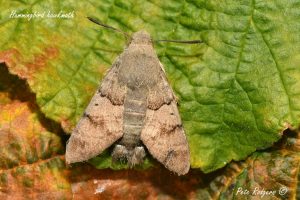 They have even been reported as such by the uninitiated! It is unusual to see them after October as it is believed that they may attempt a return migration.  Certainly they would not normally survive our winter but with ever warming weather patterns perhaps we are seeing a further evolution in their habits.  I duly reported my sighting to the county moth recorder and was interested to learn that it was the first-ever December-reported sighting in Gloucestershire for this species.