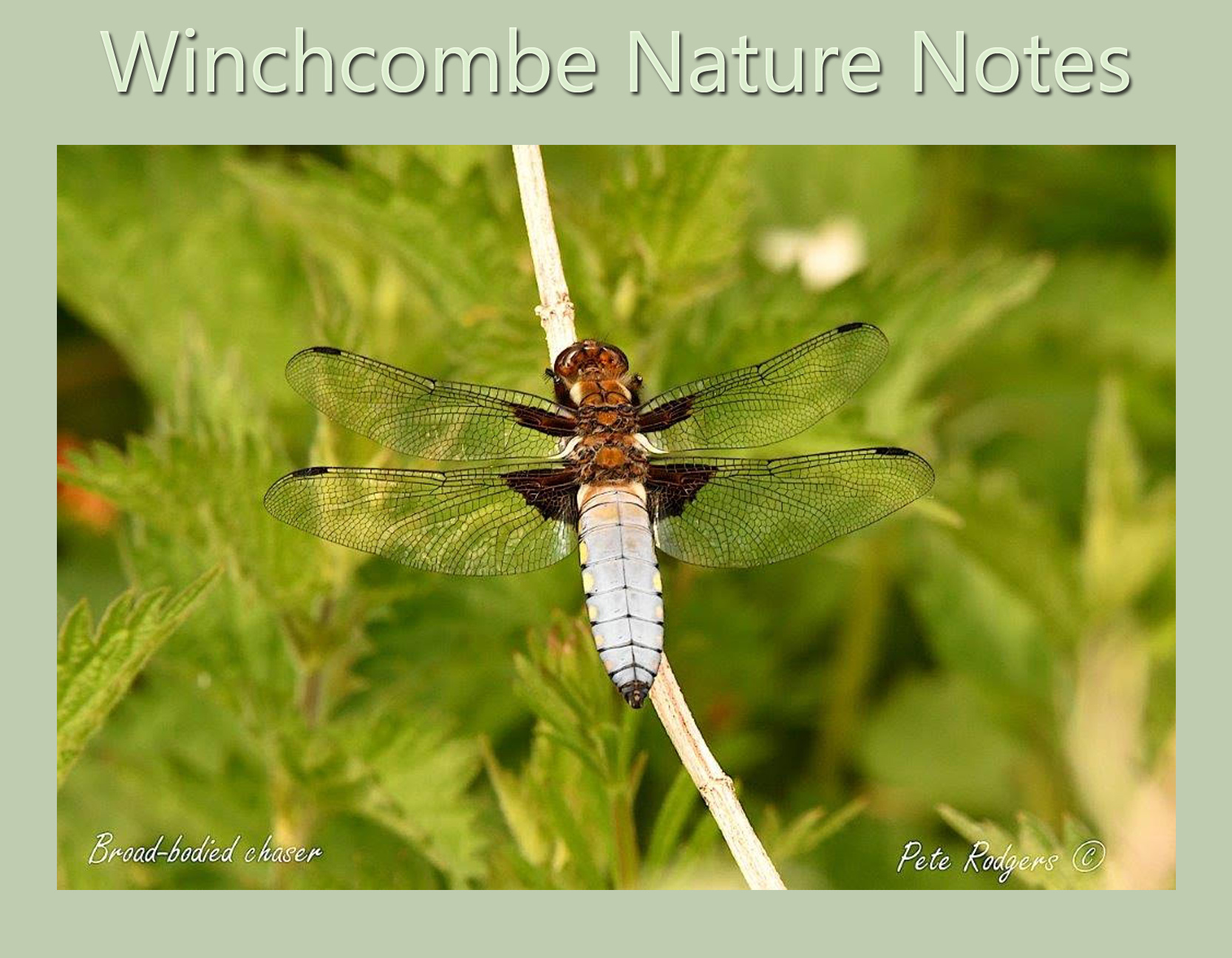 At the conclusion of each set of Nature Notes, I wonder what I will find to write about next time, hence the inclusion of the rider ‘an occasional column’. It gives me a get-out although so far I haven’t needed it; Mother Nature has always come up with the goods. And this time is no different.

I will often take a camera with me on a country walk and at the beginning of May it paid off handsomely. On my permitted exercise I encountered that beautiful mammal, the brown hare.  For some reason I like the hare more than its close cousin, the rabbit. They are far less common, and consequently seen less. Their sharp eyesight means that they see us first, so often we only see their back end disappearing into the distance. 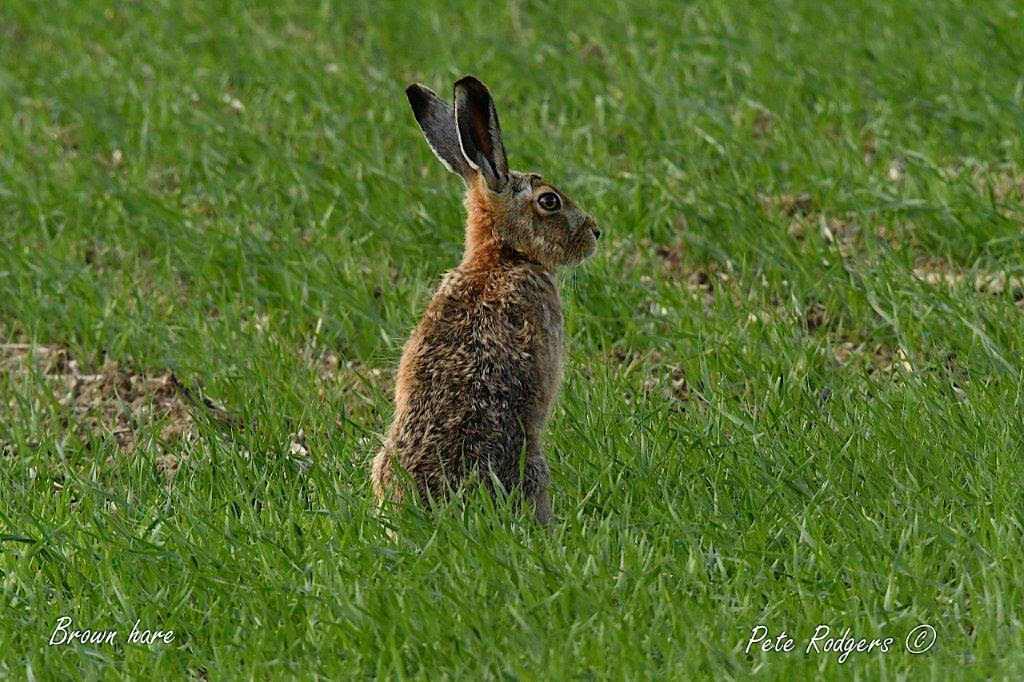 However, this time I spotted a hare close by, sleeping flattened to the soil in a field of newly emerging cereals. I had to look twice. Initially, it appeared to be no more than a heaped pile of earth. Normally this behaviour would offer it enough protection and certainly I would not have seen it had the crop been taller. But my luck was in as eventually the sleeping animal awoke (I think it slept with one eye open, just in case) and slowly took in its surroundings, seeming somewhat confused by my presence.  After an eternity it sat up and eventually, deciding that discretion was the better part of valour, ran to the centre of the field where, stopping, it reviewed its position. By then I had my photos, the hare had its escape, so we both continued with satisfaction on our respective ways.

But the excitement was not over. Later in the morning I unexpectedly encountered my first dragonfly of the year. It was a male broad-bodied chaser, a stunning powder-blue insect in pristine condition. Long ago I photographed the female, which is an old-gold shade of yellow, and my attempts at getting a decent image of the male had all come to nought. So often, after a few days on the wing, the insect shows signs of damage. Pieces missing from one of its four wings are not unusual and whilst this does not impact upon the insect it does rather spoil the photograph. But here, at the beginning of May, was an immaculate insect sunning itself on a stem in the verge. Interestingly, when it first emerged from its nymph case, as a juvenile, it would have resembled the female in colour. Then, as it reached maturity, it would have gradually changed colour; the colour change starting at the tip of the abdomen and gradually working along to the thorax. So for a few days it would have been two-toned, rather like a jester in medieval times. 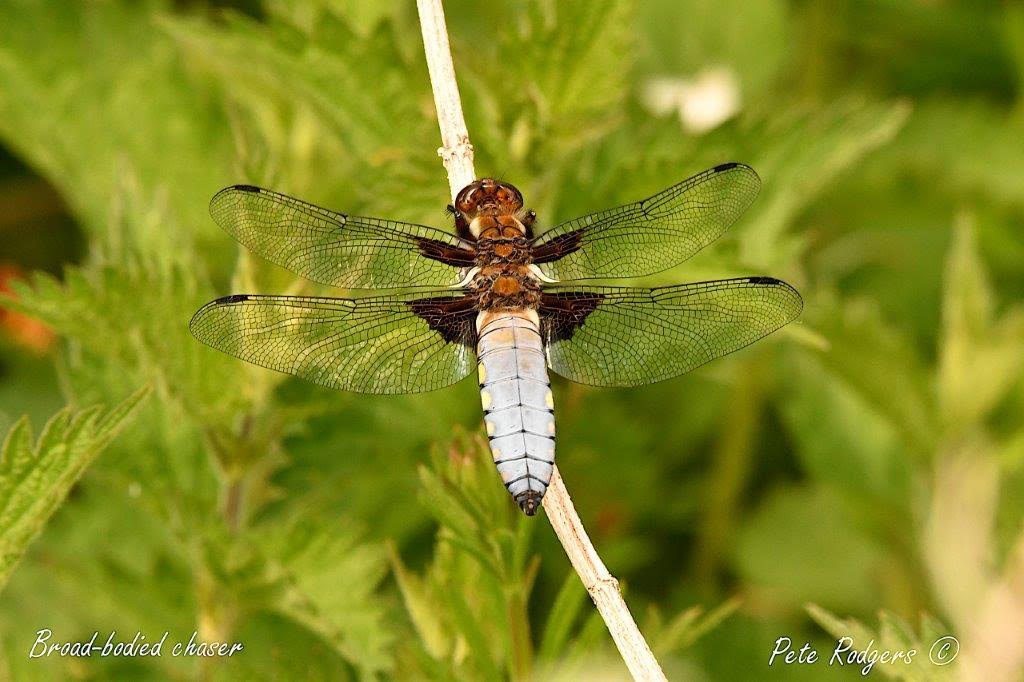 Now its transformation was complete, so, with camera to hand, it was recorded for posterity!

The insect has spent up to three years as a nymph on the floor of a local pond. Here it will have been a voracious predator, feeding on almost any pond life it found. Now, as a beautiful winged insect, it will spend the next few short weeks of its life seeking a female with which to mate and thus continue the line.  A most enjoyable exercise session!

A few days later I had another ‘double’ dose of nature, this time right on my doorstep.  With apologies to Agatha Christie, I should, perhaps, subtitle this as ‘Death in the Close!’

I was just emerging from the shower, dripping wet, when my wife informed me that there was a sparrowhawk feeding on the ground opposite. In about two minutes flat I’d dried, dressed and grabbed my camera. Cautiously crossing the road I could see the bird ahead of me but was afraid my presence would drive it away. Fortunately a couple of trees came to my rescue and I found that if I moved in closer whilst its head was down tearing at its meal and used the tree trunks as cover, I could get close enough for a photo or two. 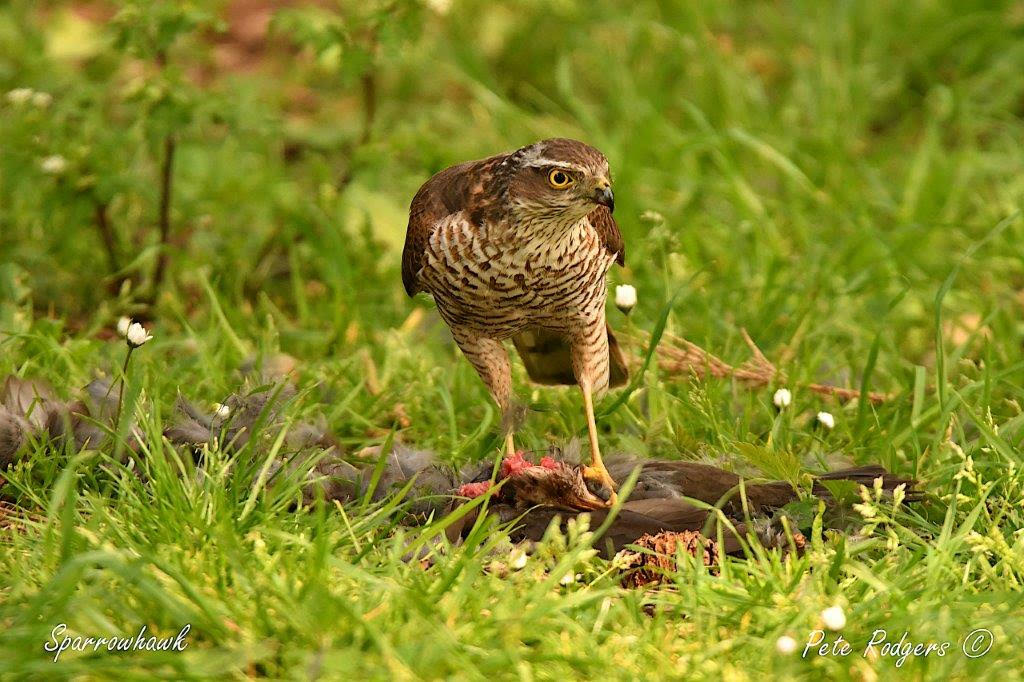 The bird was a juvenile, evidenced by its brown plumage, and it had caught a blackbird. It was fascinating to watch it feed, using its talons to hold the carcass still whilst tearing at the flesh with its razor-sharp hooked beak. It must surely have been aware of my presence but because I stayed still, it stayed put. Only when someone came down the road did it eventually fly off with the rest of its meal. I’m not sure whether it saw me move, perhaps, or the pedestrians but either way, enough was enough for it.

It is, of course, sad to witness the loss of such a wonderful songster as the blackbird but a sparrowhawk has to eat and smaller birds are its prey. That’s why they produce so many young as the mortality rate is so high and if they all survived we’d be over-run.  Just a pity it couldn’t have been a wood pigeon, now nothing more than a garden pest.

However, as one life form is extinguished so another comes along to take its place. Later that morning my wife announced the arrival of an increase in our household! Our first large elephant hawkmoth had emerged. Last autumn I wrote about finding eight caterpillars of this magnificent moth eating their way through the foliage on an ornamental fuchsia in the garden. Four went to earth to pupate so I collected the remaining four and continued to feed them until they also pupated. I kept them over the winter months in a container in my garage. At the end of March I transferred each pupa to its own container, fitted with a small twig for the emergent moth to climb. And on 8th May there was the first moth to emerge sitting quietly at the top of the twig. 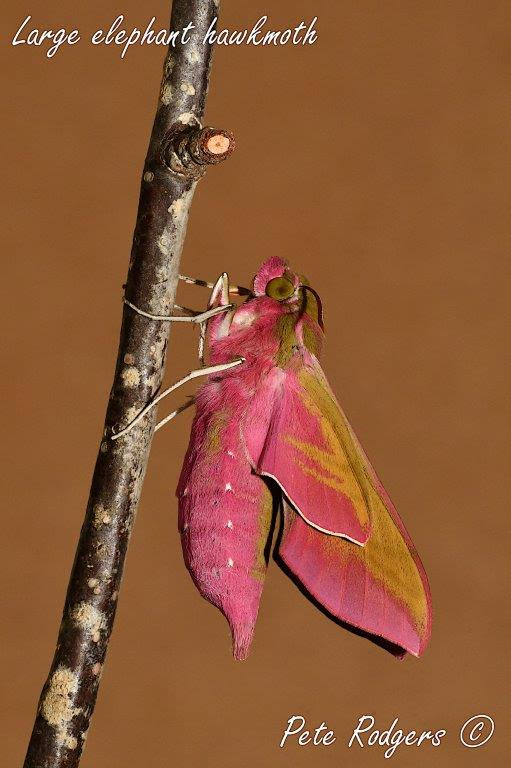 Being a nocturnal insect, it was not interested in flying so I encouraged it onto my hand and then transferred it to another larger stick which enabled me to get some studio quality photographs. It sat quietly until I took it into the garden in the evening to prepare it for its release. After a minute or two it started to shake its wings, a precursor to flight. And then, all of a sudden, it took to the air and was gone.

A second moth emerged on the 9th, a third on the 11th and, finally, the last of the four on the 16th. To misquote Meatloaf, ‘four out of four ain’t bad’.

The very next morning I experienced another brief sighting of the white grey squirrel that I know has been seen around my area in recent months. I had briefly seen one in a garden in the Gretton Road some months back but here was one before my eyes across the road scampering up a tree trunk. Unfortunately, that’s the limit of my latest sighting. It’s not returned so obviously was only passing through but I live in hopes that it’ll show itself for a bit longer quite soon. That presupposes the resident greys will tolerate it in their presence.

On another of my permitted exercise walks I went further afield and took a walk along the Old Brockhampton Road to Waterhatch. The hedges were by then in full leaf so, although I heard bird song, I actually saw little. The usual suspects were supplemented with visitors from overseas, such as chiffchaff, blackcap and whitethroat. The first two species can sometimes be found in winter in Winchcombe as milder weather means they can survive without the necessity of a long migratory flight. I had given up hope of doing anything with my camera, other than take it for a walk, when I encountered a chiffchaff using the upper branches of a dead sapling as a song post. 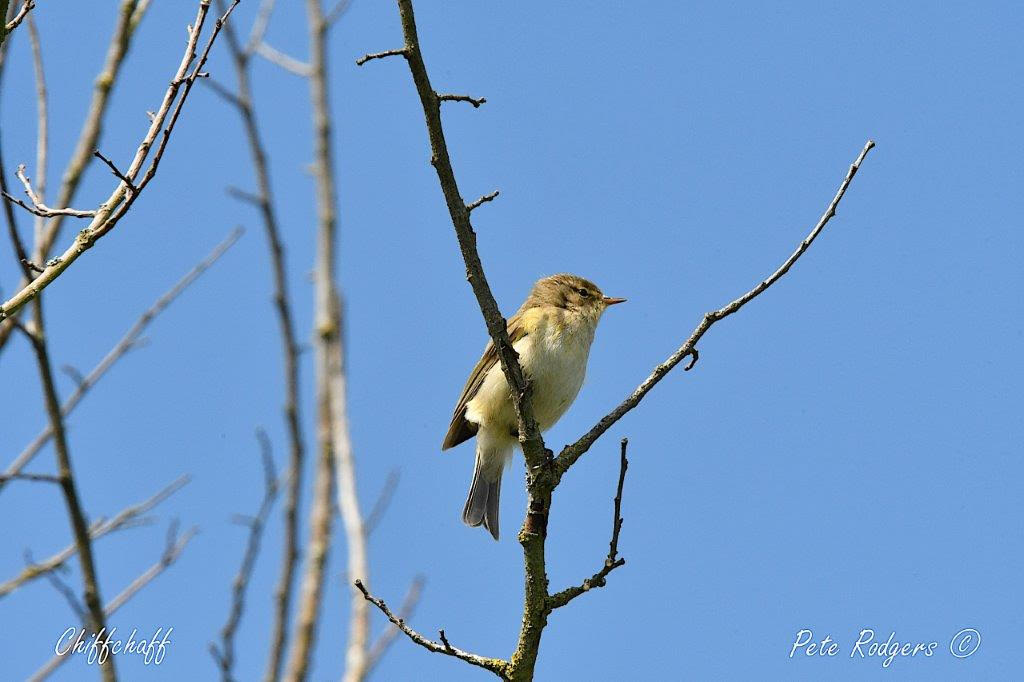 The song of the chiffchaff must be the easiest of any bird to recognise, with the exception of the cuckoo. It is a rather monotonous zip-zap, zip-zap, zip-zap, with an occasional zip-zip-zap for good measure. Rather like the metronome that the music teacher used to try to instil into me some musical understanding. Fair to say she failed. Now if she’d have played the call of the chiffchaff…

Waterhatch produced a couple of swallows and a pair of long-tailed tits. They obviously had a nest nearby as they returned time and again to one or two favoured bushes to collect grubs for their young. They really are charming little birds, often visiting the garden in family parties in the winter months. I’ve heard them referred to as ‘lollipop’ birds, the body being the lolly and its tail the stick with which to hold it. They are remarkable active and as a consequence not the easiest bird to photograph.

The long-tailed tit is not closely related to the true tits such as blue tit and great tit but belongs to a larger grouping which includes birds such as warblers, swallows and larks. Birds found in continental Europe differ slightly from the British population whilst those in northern Europe have completely white heads. Consequently they have different sub-species classifications.

My return home was without incident until I spotted a stunningly beautiful damselfly in the verge. Beautiful by name and beautiful by nature, this was a female beautiful demoiselle. I can’t recall seeing one in or near Winchcombe before but I shouldn’t have been too surprised as the Isbourne was close by and this was surely where it originated. Both the beautiful demoiselle and its close relative, the banded demoiselle, flutter about like butterflies. Their rich blue (males) or iridescent green (females) make them easy to see when they fly. I have certainly seen plenty of demoiselles along both the Severn and Avon; they are always a joy to behold. 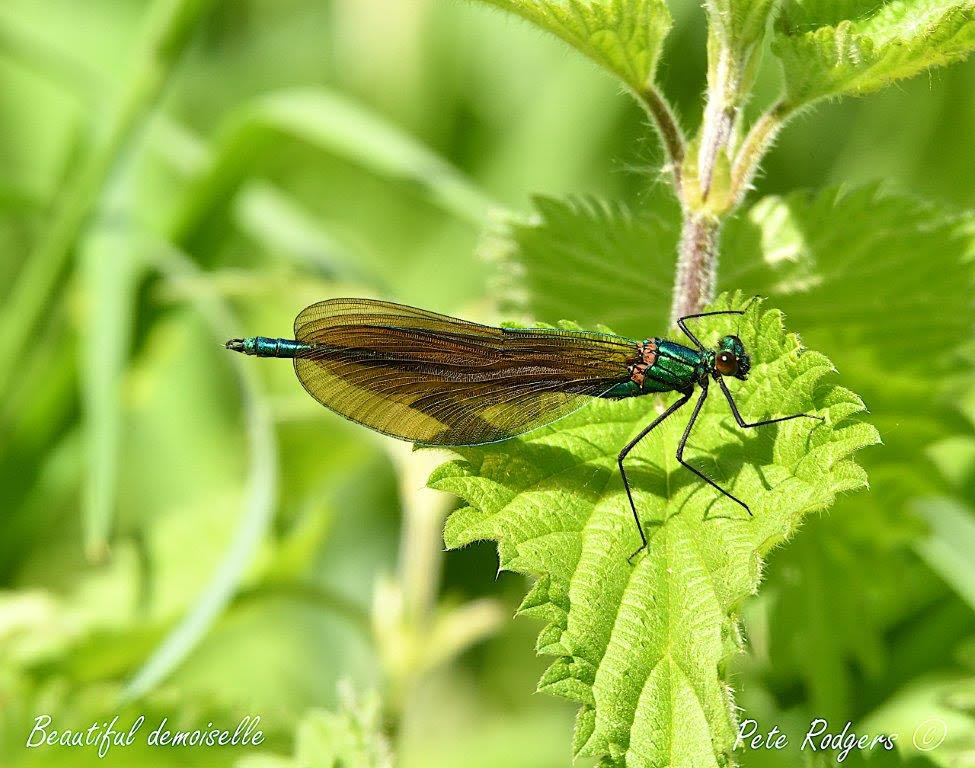 One of my favourite summer visitors is the swift. Known in olden times as the ‘devil bird’, it is wonderful to behold as it scythes its way through our skies and around our rooftops. Swifts are  masters of the air and often form small groups to chase each other around the houses, screaming, presumably in excitement, as they do so. Unfortunately numbers of swifts returning to the UK each summer seem to be on the decrease. I used to see the first ones back in Winchcombe during the last days of April but this year it was not until the 8th May that I saw my first swift this year. I was beginning to wonder if they would return to Winchcombe at all. Now the number of birds has risen to ten; at least that’s the most I’ve seen together. Hopefully there are other about that I’ve missed. It will be a sad time indeed if we reach the point when none return at all.

With lock-down now slowly easing thankfully, we can all go a little further than before. Enjoy the new freedoms but most of all, stay safe.