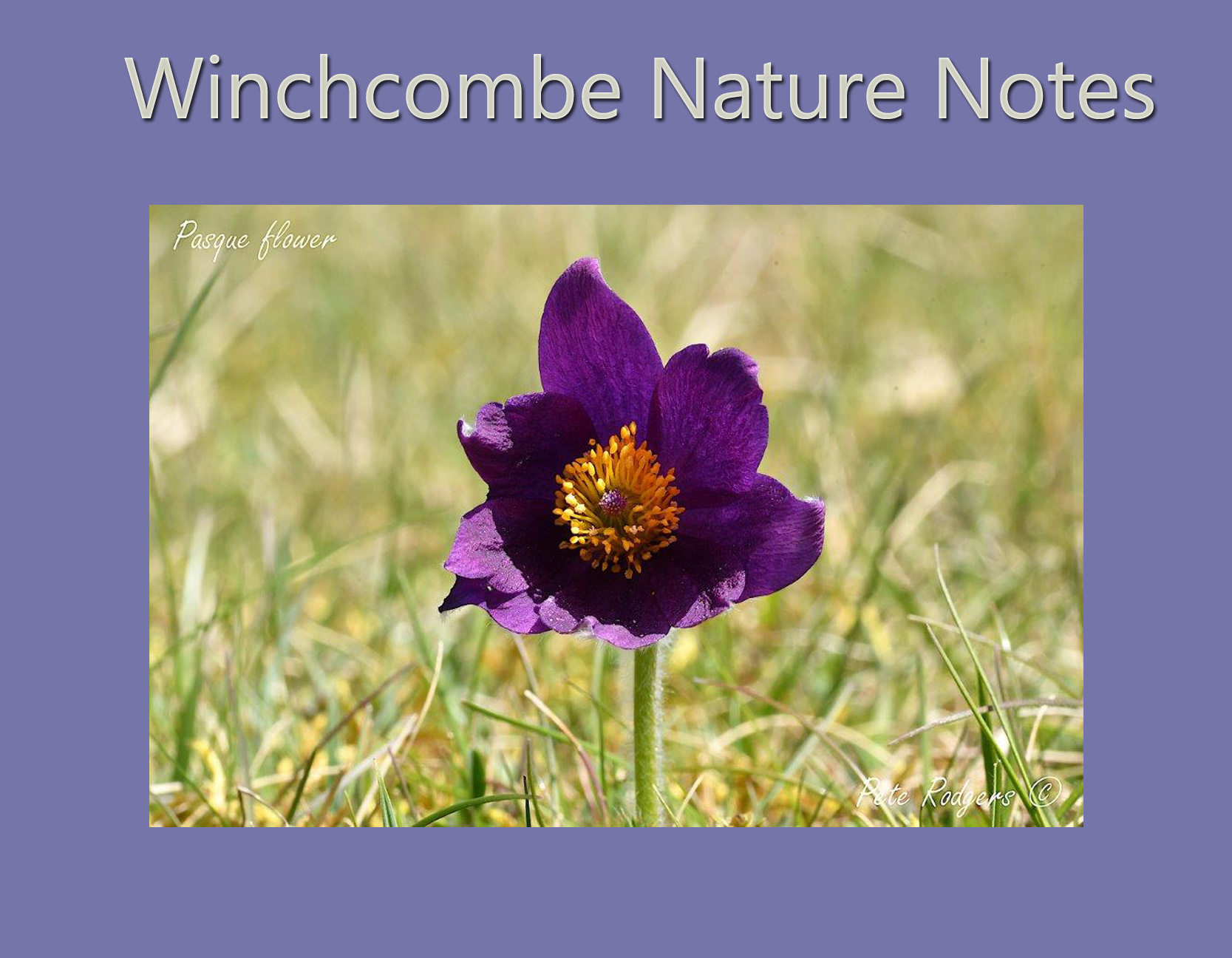 Weatherwise, April had it all. A spell of beautiful days with unseasonally  warm temperatures led to clear skies at night and a record of eleven nights with frosts. Throw in wintery conditions, including a fall of snow, and there was something for everyone.

There was a distinct lack of rainfall but that was put right once we got into May with gales and torrential downpours on the 3rd, not unusual for a British Bank Holiday!

Nature will undoubtedly find a way of coping with such extremes, it usually does.

I saw a very early holly blue butterfly in the garden on 31st March but there was a two-week delay before I recorded the next springtime butterfly, a male orange tip, on the 13th. 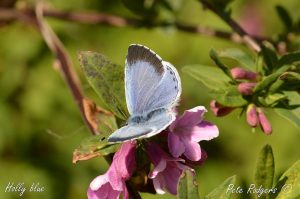 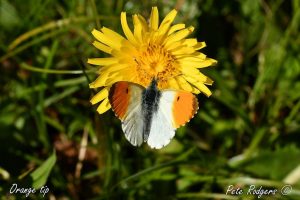 Male orange tips are perhaps the easiest butterfly for even the uninitiated to identify. It’s the only small white butterfly encountered with very obvious orange patches at the wing tips.

Females are more tricky unless seen at rest. Easily dismissed as just another white butterfly if seen in flight, a closer view when seen at rest reveals a greyish-green mottled underwing pattern. Although the male has the same underwing pattern, the female will lack the coloured wing-tips.

I ventured onto Cleeve Common on the 13th as good numbers of spring birds have been reported. It is, of course, a large area to cover but regular birders get to know the most likely places where the ‘special‘ birds can be found.

Ring ousels are the jewel in the crown in spring. These are superficially similar to our familiar blackbird but distinguished by a white crescent across the breast. Respectable numbers pass through on migration in March and April.

They are sometimes referred to as the moorland blackbird as they breed on higher ground in places such as the Pennines and Scotland. Cleeve Hill is a stop-over for the birds, giving them a chance to rest and feed up before the next stage of their migration. It follows, therefore, that they should not be disturbed as little as possible.

I saw no ring ousels on my visit but did quickly encounter another migrant that calls into Cleeve Hill on its migratory path, the wheatear. 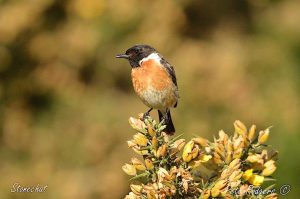 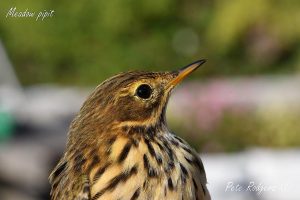 These are always a pleasure to encounter. They are related to the thrushes although perhaps a little smaller than our familiar song thrush. As they take flight their very obvious white rump patch becomes visible, confirming identification if it was in doubt.

More usual birds were also present including stonechat, meadow pipit and linnet. A now commonplace red kite treated me to a fly-over. 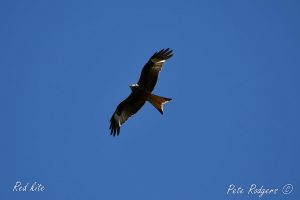 It was on the evening of the same day that I had a sighting of my first bat of the year. Enticed from its hibernation by the spell of warm weather it circled the garden for quite some time on its search for food.

I can only make a guess at the species as I do not have a bat detector. These clever instruments will identify a bat’s echo-location emissions and give a positive identification. I suspect this small bat was one of the pipistrelles that we have in this country.

Remarkably, the pipistrelle was found to be, in fact, two distinct species a few years ago so we now have the common pipistrelle and the soprano pipistrelle. In 1997 Nathusius’ pipistrelle was also added to the British list after being found to be resident here so I have three species from which to choose!

I suspect it is the common pipistrelle. So many of my wildlife sightings are prefixed with the word ‘common’.

Spring flora has come on apace in the last month or so as anyone walking around our lanes or along our footpaths will testify.

Most obvious, perhaps, is the cow parsley which is throwing up flower spikes that will reach up to three feet tall, producing a froth of white umbellifer flowerheads to brighten our countryside and feed the insect population.

However, it was with some surprise that I chanced upon a small colony of snakeshead fritillaries growing in the roadside verge near Alstone. I was only there because of road closures in Gretton so that proved to be a worthwhile diversion, for once.

These charming flowers prefer damp pastureland so I have no doubt that these were planted by some well-intentioned local to brighten our countryside. And I think it has worked.

I was expecting to have to make the trip to Cricklade in Wiltshire, where there is a well-known meadow of these flowers each spring, so this find at least gave me the opportunity to take some photographs even if I couldn’t enjoy the full vista of a flowering meadow. 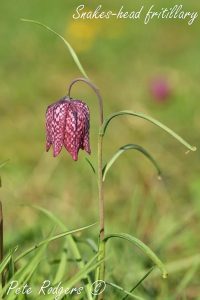 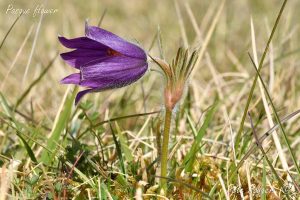 Another flower on my wish list this year is the pasque flower. These traditionally flower at Easter, according to the field guides but, of course, the dates for Easter vary from year to year. Mid-April onwards is close enough so I took a trip to Barnsley Warren, near Cirencester, on the 15th in the hope of finding them on this well-known site, managed by the Gloucestershire Wildlife Trust.

Enough were in flower to consider the trip a success, which was topped off by a magnificent flight display by a red kite on the opposite side of the valley.

The flowers were smaller than I expected, being no more than three inches tall so it was a case of getting down to their level to fully appreciate their beauty. And what stunning flowers they are.

On arrival back at the small lay-by where I had parked my car I met Mike Dilger, who often appears on television presenting nature features. He explained that he had visited the reserve many years ago but was now unsure how to find it. Could I give him directions?

Having pointed him in the right direction, he was soon underway. I hope he derived as much pleasure from his visit as I did from mine.

That I could make this small trip was due to the relaxation in lockdown restrictions.

Many of us now have had both our jabs of the Covid-19 vaccine which has supported our own efforts to control the virus during lockdown. That we can all look forward to a return to some sort of normality is down to those dedicated people developing, manufacturing and administering these vaccines.

They deserve our grateful thanks.