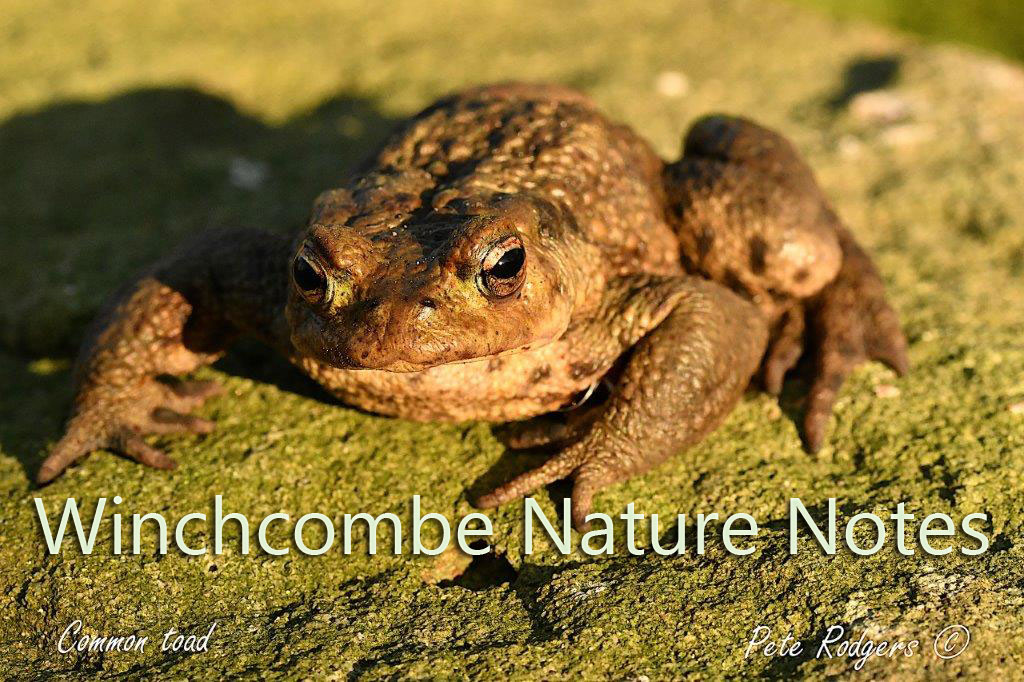 Undoubtedly, the Coronavirus pandemic has increasingly dominated the headlines in the past month. It is clearly not without its issues and it is fair to say that everyone’s life has changed for the worse as a result. The only consolation is that we are no longer swamped with Brexit news, which doesn’t seem to get a mention anymore.

Although our lives have suddenly been put on hold, the earth is still turning and we have inexorably moved from winter into spring, at least in Winchcombe. Time and tide wait for no man according to the old proverb and certainly the natural world is not waiting for us, although how much of it anyone will see this year from beyond the garden fence is currently unknown as a result of personal restrictions now placed upon us. We can still get out to exercise at present and a walk in the countryside in the vicinity of home, is still permissible, providing we keep our distance from fellow walkers.

On the bird front, summer migrants are already arriving. Summer visitors such as chiffchaff, sand martin and swallows are already in the county, albeit in small numbers at present but increasing daily.

Hibernating butterflies such as peacock, small tortoiseshell, comma and brimstone are being reported on warmer, brighter days. I glimpsed my first comma and brimstone butterflies in the garden on the 22nd and have since seen both the peacock and small tortoiseshell. Spring flowers in the garden continue unabated. The snowdrops have been replaced by the earlier varieties of daffodil, which in turn are themselves being usurped by later varieties. Tulips are in bud and the hellebores are again excellent. In the countryside primroses have been in bloom for a while, the lesser celandines are a mass of bright yellow in the verges (and lawns!) and it won’t be long before bluebells come into flower. 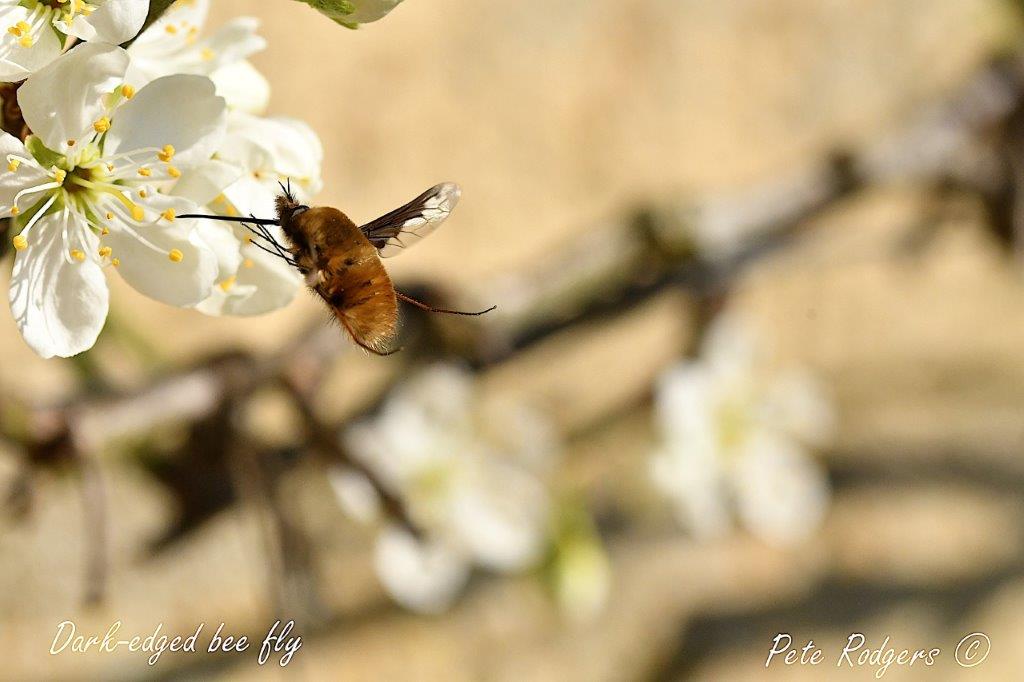 The past few days of warm, sunny weather have brought forth the dark-edged bee fly. This is one of twelve species of bee fly recorded in the UK and is quite easy to spot once you’ve got your eye in. A rather unusual insect with a furry body, patterned wings and a long proboscis, it hovers in front of flowers to drink nectar. It can be mistaken for a bee by the untrained eye but is actually a fly. Despite appearances, it is quite harmless. My photograph shows a bee fly making a bee-line (or should that be fly-line) for the blossom on my plum tree. With a camera shutter speed of 1/4000 I’ve just about managed to freeze the action. Unsurprisingly, most flight shots don’t cut the mustard.

It is not unusual to see flocks of gulls in the fields around Winchcombe during the winter and early spring months. These are usually common gulls, which forsake the coast to feed on invertebrates in damp pasture. They are sometimes joined by smaller numbers of other species, principally black-headed gulls. Flocks of up to a hundred birds can be seen, often taking to the air when disturbed, or perhaps for no obvious reason at all.

Both species are misnamed: the common gull is not particularly common (its name may come from the use of common as in commons and moors), neither does the black-headed gull have a black head (it is chocolate brown). Both are widespread across Europe and both breed in the UK in varying numbers.

Many still refer to gulls collectively as seagulls. There is, of course, no species with that name but it’s good enough for starters, although simply ‘gulls’ is preferable. There are about seven gull species that could reasonably be encountered in the UK but with rarities this number could double. Identification and ageing of some species is not always straightforward due to the evolution of species across Europe. Indeed, in some cases, what were once considered sub-species have now been awarded separate species status. Add in to the equation summer and winter plumaged birds, juveniles, immatures and, if lucky, a vagrant then the issue of correct identification and ageing can prove tricky.

Black-headed gulls, for example, reach maturity at two years of age, common gulls at three and herring gulls at four. Consider also the subtle changes of plumage as the birds moult from one season to the next, the changes in bill and leg colour and it is not difficult to see that confusions can occur, even amongst seasoned birders. Notwithstanding, some birders are extremely good at it. I have reproduced some photos of the lesser black-backed gull, showing the different stages in its ageing to highlight the difficulties.

April should see much more activity on the nature front with more birdsong and more early season butterflies, such as the orange tip and green-veined white.