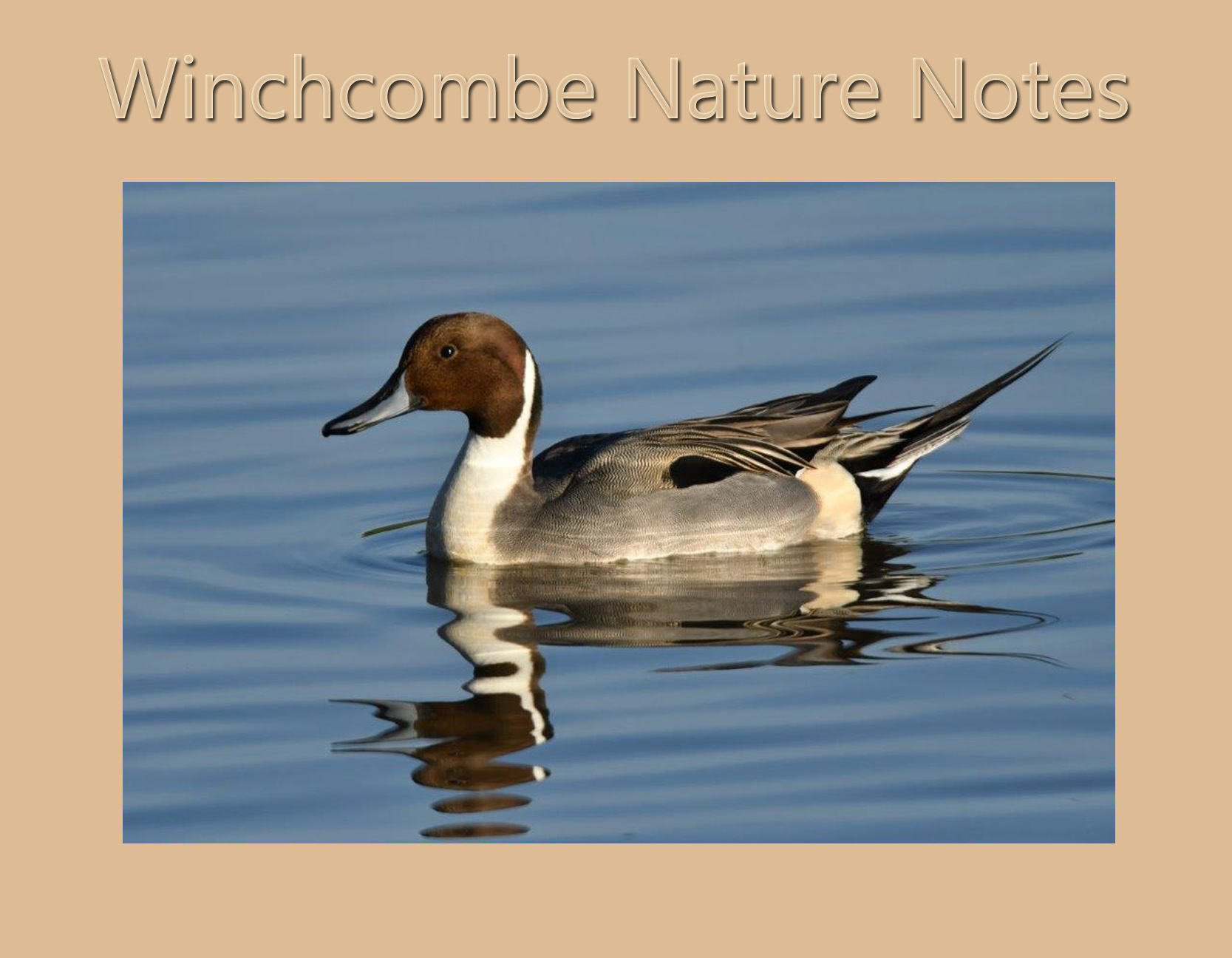 Since my last Nature Notes we have endured almost three winter months of varying weather.

December seemed plagued with days of dull, overcast skies whilst January saw more frosty but brighter days. I can live with those much more easily than the battleship-grey skies of December.

And just when we are starting to see a little light in the morning sky with the slowly increasing day length, and my spirits are starting to rise, we are hit with mini hurricanes in the form of storms Dudley and Eunice.

Winchcombe seemed to avoid the very worst of these Atlantic depressions and one can only have sympathy for those whose homes and lives are affected. I’ve seen some dramatic footage of falling trees and roofs being blown from buildings and just been grateful that I have not been affected.

The coast undoubtedly provides dramatic scenes with giant waves beating against sea defences. These prove a magnet for some and make for some amazing photographs although I’ll stick to the TV for my viewing fix.

I’ve said before that Winchcombe is not a hotbed for wildlife and this applies even more so in winter.

Consequently, I have been on my travels to find wildlife so apologies that this offering is from out of town.

Sharpness (not so far, really) is one place in Gloucestershire where in winter one is almost guaranteed to find a black redstart. This small sparrow-sized bird regularly over-winters in Britain and a few do breed in one or two places. 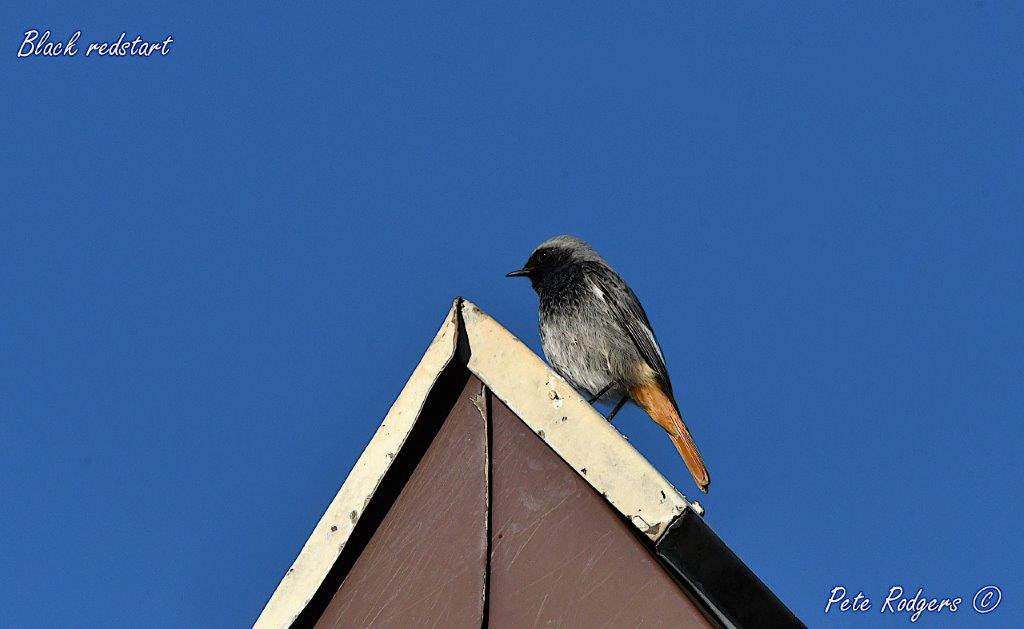 The birds have a liking for ledges and buildings which to them replace more natural cliffs. They have occurred on Gloucester Cathedral and Tewkesbury Abbey where they sit up on the high ledges to watch the world go by.

Fortunately, my trip to Sharpness was worthwhile as I spent some time watching and photographing a very fine male bird in somewhat unseasonal sunshine as it moved around the rooftops and window sills of an abandoned building close to the river.

The word ‘redstart’ comes from an old English name given to the bird: read (red) + steort (tail). Like the robin, it belongs to the extensive Thrush family of birds.

Ten days later found me heading south once again. The forecast was for an overnight frost and this usually means that a bright day often follows.

This time I found myself on the edge of the disused airfield at Weston super Mare, hoping to see and photograph a real rarity in Britain, the penduline tit. 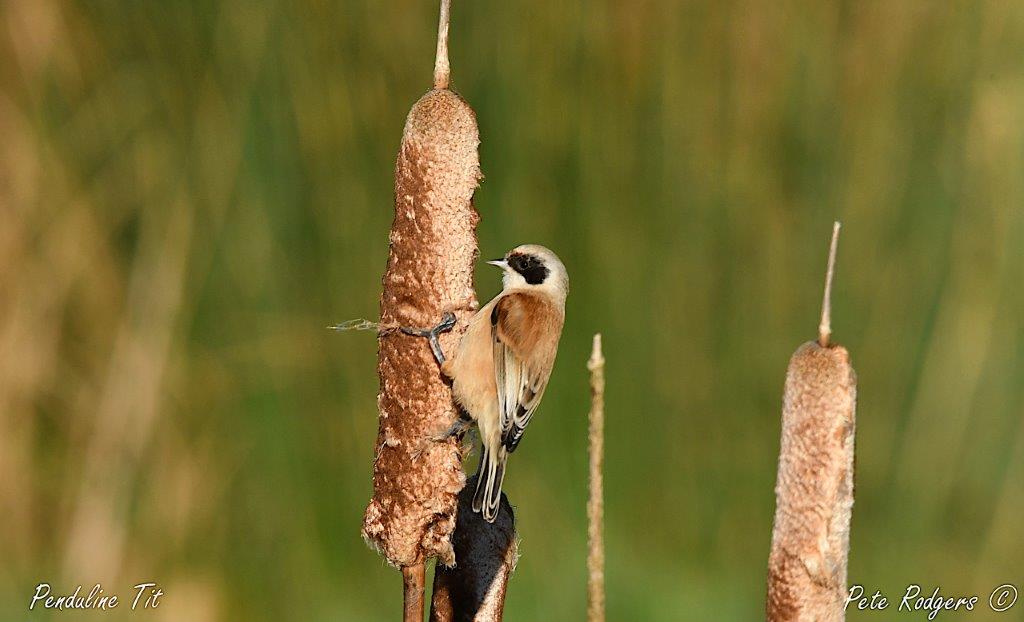 These small birds are reedbed specialists and whilst more common on the continent only occasionally turn up on this side of the Channel.

However, sightings are becoming more frequent and the hope is that some may stay on after the winter to breed.

Three birds were being reported daily from a site that was also visited last year by this species. They are not a ‘here today, gone tomorrow’ bird, preferring to stay in a chosen locality for the period of their winter visit.

I was glad that I wore thermals, in anticipation of a chilly stake-out. Slowly, oh so slowly, the watery winter sun lifted the temperature above freezing and then after a couple of hours spent watching and chatting to other birders, contact was made with these masked raiders of the reeds.

They are particularly attracted to the downy seed heads of bullrushes. They pull off the down, which then drifts away on the breeze, before they search the brown cylindrical spike for grubs that live within.

All three gave excellent views as they worked their way systematically along the bullrushes. Eventually I left them to it, having enough good views and photographs to consider the journey worthwhile.

Interestingly, penduline tits turned up a few winters ago much closer to home, on the outskirts of Gloucester. Two wintered at the Horsbere Brook flood storage area (Hucclecote) and a single at a pond at Plock Court.

Both areas held growths of bullrushes but unfortunately, the birds have not repeated these visits but that’s not to say they won’t in the future.

A couple of days later I took a trip to Oxfordshire in the hope of finding a great northern diver that had been reported as being present on Farmoor Reservoir.

Farmoor Reservoir is, in fact, two large reservoirs (Farmoor 1 and Farmoor 2) divided by a causeway.  It is managed by Thames Water and offers various water based leisure activities.

The sides are concrete and prove attractive to resting birds, especially those on migration. These are able to feed from the concrete apron, picking up insects close to the waterline. 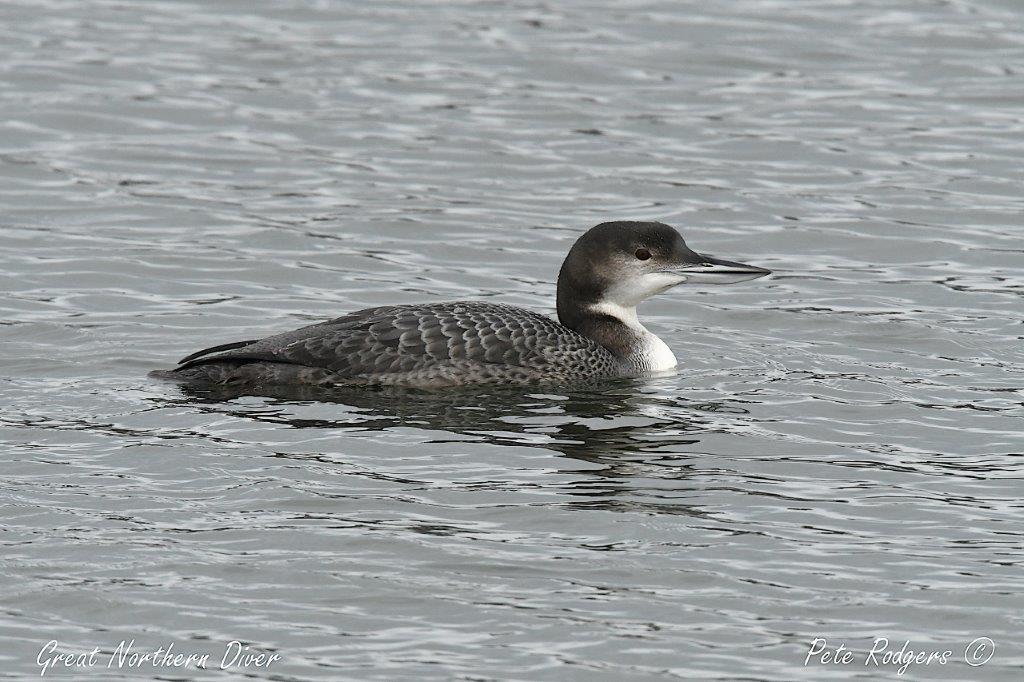 Known as loons in the USA, they occur and breed much further north. Scottish lochans host breeding red-throated and black-throated divers in summer whilst the great northern breed in Iceland, Greenland and North America.

Apart from reservoirs great northern divers may be found off our coasts in winter but can be too far away to view satisfactorily.

I did a complete circuit of Farmoor 2 (almost three miles) without locating the diver, only to arrive back at my start point to find another birder who explained he’d spent a pleasant twenty minutes photographing the bird, which had now flown off towards the middle of the causeway. Grrr!

Well, I soon located the bird, a juvenile, and my disappointment soon became a distant memory as I watched and photographed the bird just a short distance away.

It is amazing the distance these birds can cover under water. Spending as long as thirty seconds below the surface, they suddenly surface as much as sixty or more yards away. There follows a hurried walk along the causeway, hoping to get close enough to the bird before it dives again.

Into January and on a sunny day it’s always worth visiting WWT Slimbridge as the ducks in particular are looking very smart in their breeding plumage.

I stopped on the approach road, by the bridge over the Sharpness canal, in the hope of making contact with a glossy ibis that had been reported almost daily. 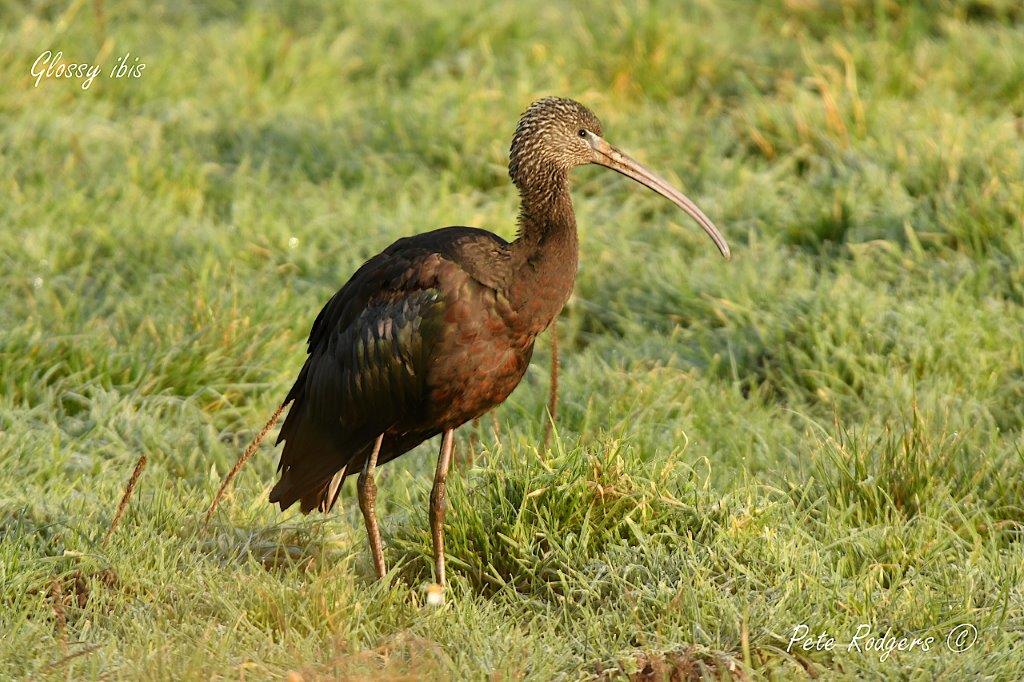 I was immediately in luck as a fellow birder told me it had just flown into its favourite spot. Close to the road, it was easy to watch and photograph. It was also pleasing to be able to point others to the right spot.

The glossy ibis is a bird that is reasonably common in wetlands on continental Europe. Sightings in the UK have increased considerably and the hope is that it will establish itself in the UK in the same way the little, great and, to a lesser extent, cattle egret have.

Moving on to the Slimbridge reserve a further surprise was in store when I chanced up three wild snow geese. They had been reported previously, but so often geese at Slimbridge can be no more than distant dots if they are feeding on the Dumbles or near the estuary. 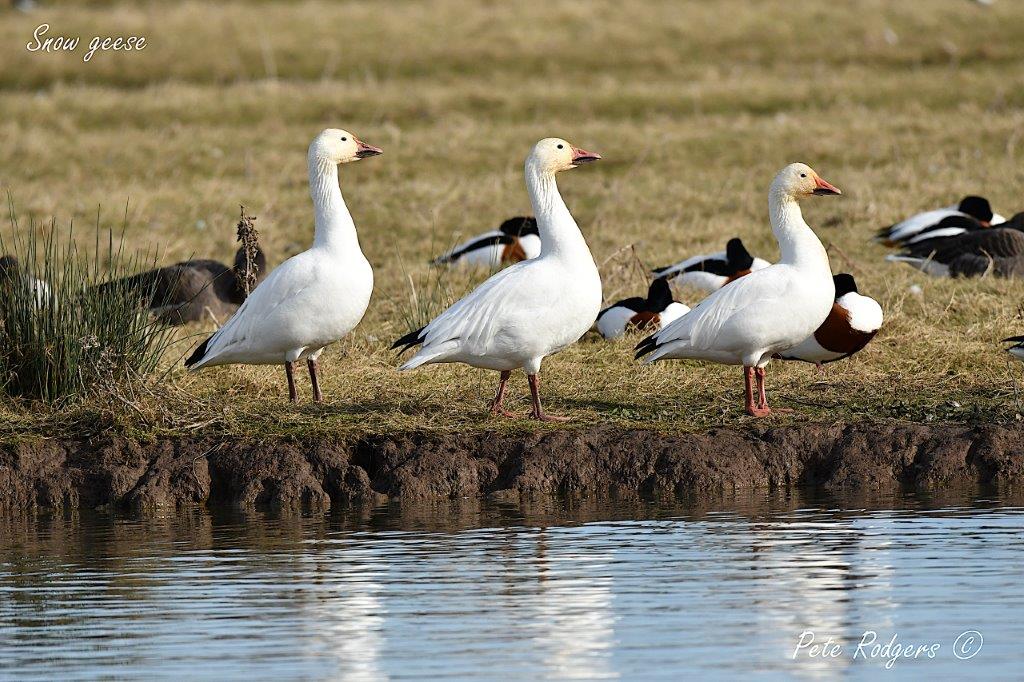 Today the three birds suddenly appeared, dropping out of the sky to land on the Tack Piece. Excellent good fortune for me for once.

The snow goose is a native bird of North America. Small numbers of feral birds exist in the UK as a result of escapes from waterfowl collections and this is the most likely source of the three at Slimbridge.

Genuine wild birds do occur in the UK and these are birds that have drifted too far east on their southerly migration. As they look the same as home-grown birds, I leave it to better ornithologists than myself to decide provenance. No one is claiming the ‘Slimbridge Three’ are genuine vagrants so feral birds they remain.

It is uplifting to see the new season’s flowers coming into bloom. Snowdrops, crocuses and hellebores are all starting to brighten our gardens and these are now being joined by early daffodils. These are always a joy to behold and it will not be long before more natural flora comes into view. 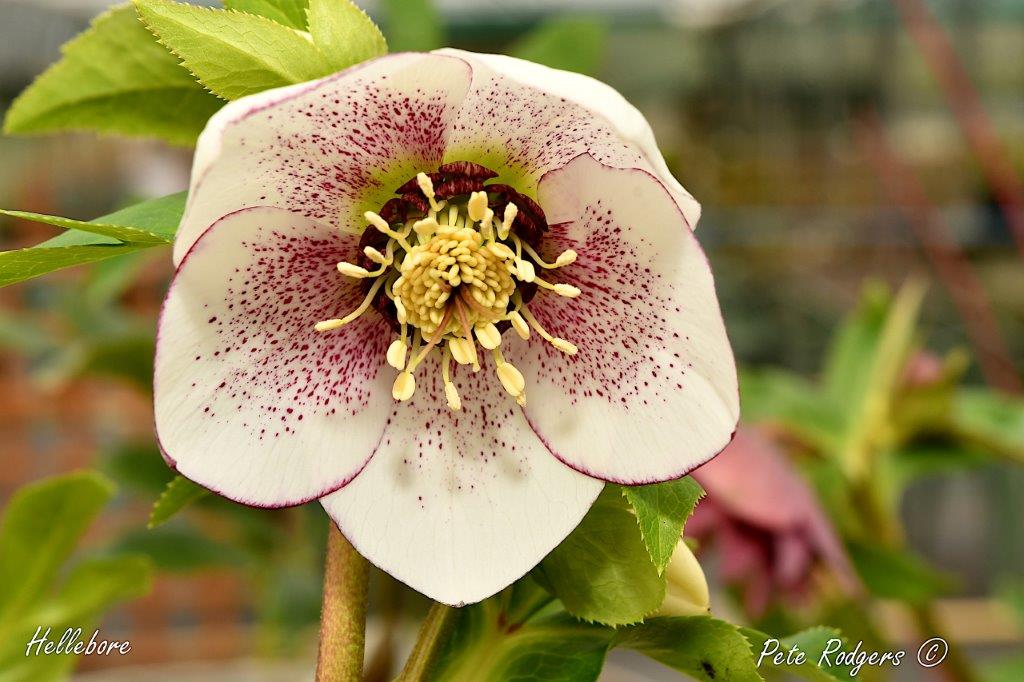 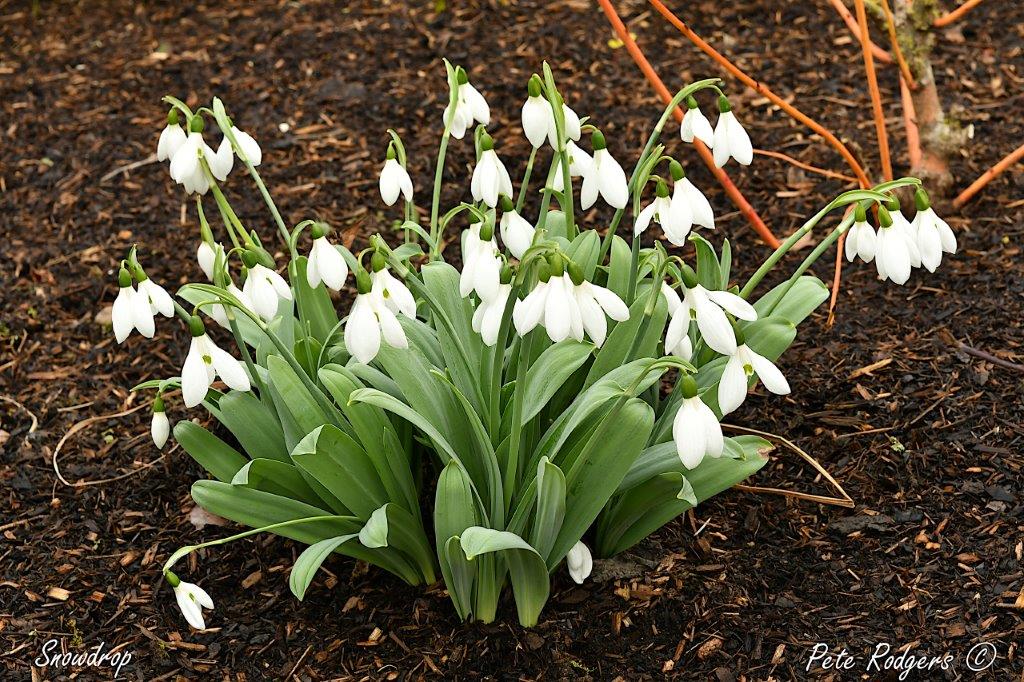 I have for long wondered how many species of plants grow in places where we don’t put them. Formal grass verges, gutters and walls are often littered with ‘weeds’. But just how many?

In 2021 I noted the plants I saw growing in such places and the final tally for the year was a remarkable 114 different species. These included garden escapes as well as native flora. A more serious botanist could probably add to this total, which was accumulated only through casual observation.

I learnt the names of one or two plants so the exercise proved educational as well as eye-opening.

It shows that nature would quickly establish (re-establish?) itself if left free of human interference.

And I’ve just learnt that Storm Franklin is due to hit tomorrow! Deep joy.