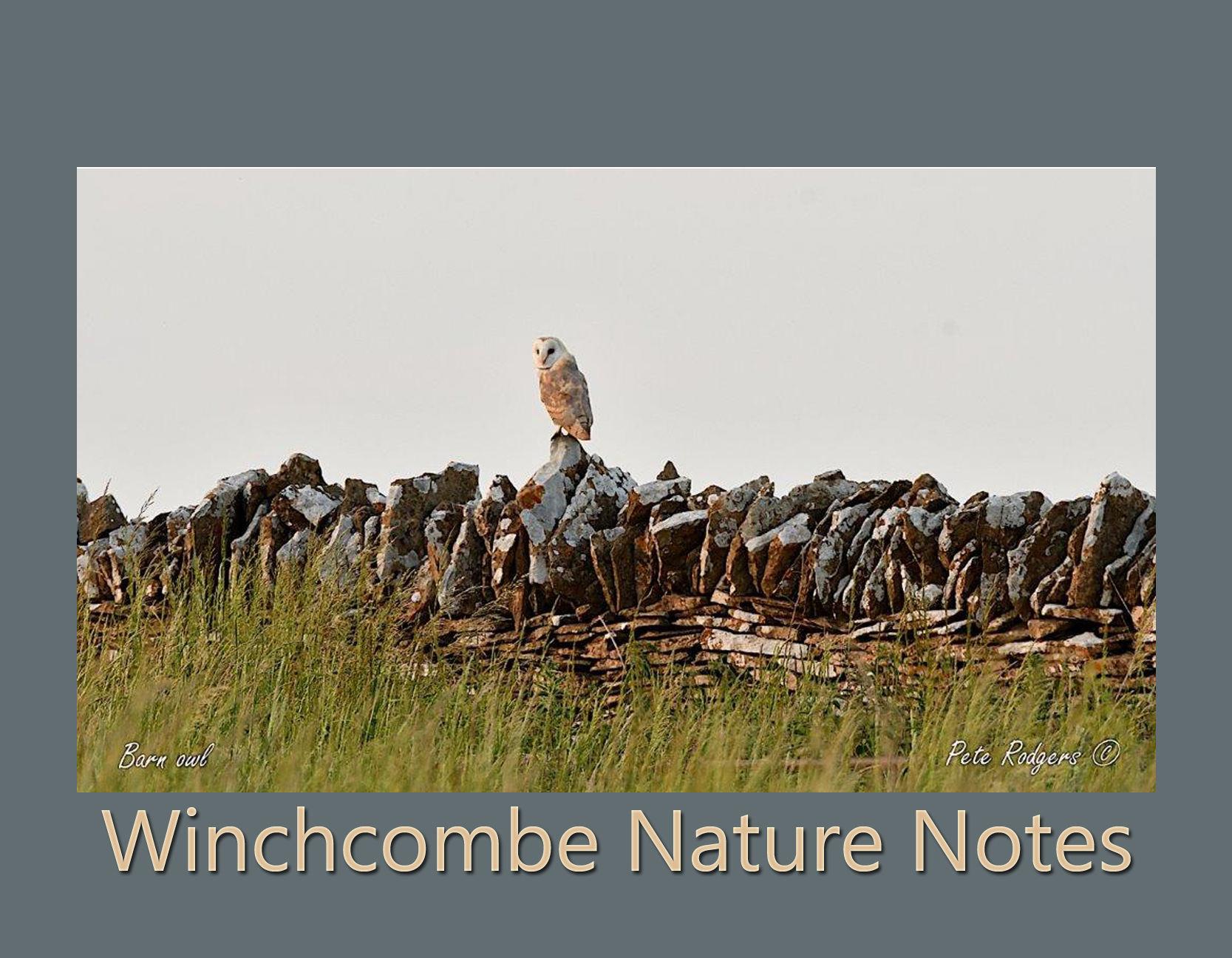 Predictably, with the easing of lockdown restrictions, the excellent weather of April and May has given way to something more appropriate for a British summer. There have been some exceptions, as media images of beaches in Southend and Bournemouth testify but generally the weather has become cooler and unsettled.  Admittedly, the rain was desperately needed by farmers and gardeners alike but the winds have been more than one would expect in June.

Nature, however, has pressed ahead irrespective. At the end of June, birdsong is definitely on the wane. The countryside has already become quieter as birds have established their territories and raised their young so the males no longer need to advertise their presence. Some may go on to raise a second brood but this often seems to be done much more surreptitiously.

I last heard the cuckoo in Winchcombe on 2 June although I have heard it since further afield. I had the good fortune to encounter both male and female cuckoos across the county boundary in Worcestershire. Whilst the male is the one that gives the familiar ‘cuckoo, cuckoo’ call, the female produces a quite different bubbling call that would confuse any non-naturalist. As this was alongside the river, I suspect that the female would have been using a reed warbler as its host species.

The garden has turned up one or two surprises over the past month. On the 6 June when the weather was somewhat inclement, I saw a hummingbird hawkmoth taking nectar from the catmint. These delightful moths are diurnal so may be seen very occasionally in flower-rich areas taking nectar from flowers. They hover in front of the plant, rather like a small humming bird, and use their long proboscis like a drinking straw to probe the florets for nectar. They quickly move from floret to floret, beating their wings at, apparently, a remarkable 85 times a second. It’s possible to hear a faint hum as a result. They show off their orange underwings to good effect and I find watching one quite fascinating. 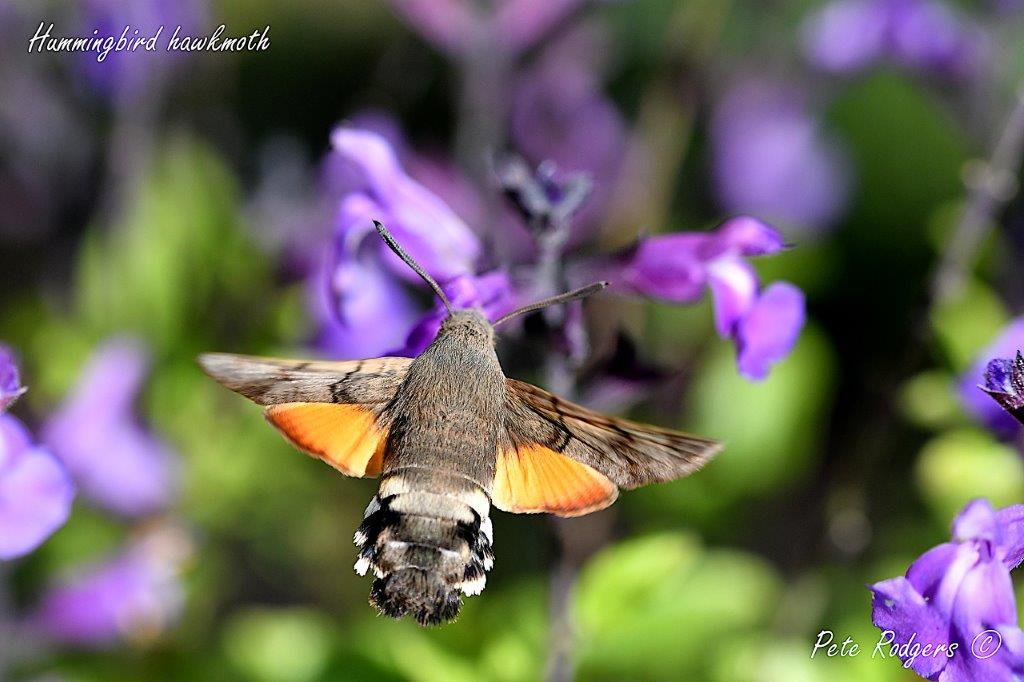 The hummingbird hawk moth is migratory, arriving in Britain from continental Europe in early summer. The species is much more common in Europe, more so the further south one goes. British winters are too cold for the moth to survive so it is a permanent resident only in the south of Europe. That having been said, my eagle-eyed wife spotted one in the garden on 1 December last year. I found it roosting the following day. It transpired that it was the first December record for the species in Gloucestershire!

Another interesting moth features on the radar this month. I saw the scarlet tiger fluttering around in Castle Street at the end of May and again at the beginning of June. This is another day-flying moth and could easily be confused for a butterfly by the uninitiated. Its flight is weaker than most butterflies and its bright red underwings contrast vividly with its white-spotted black upper wings. 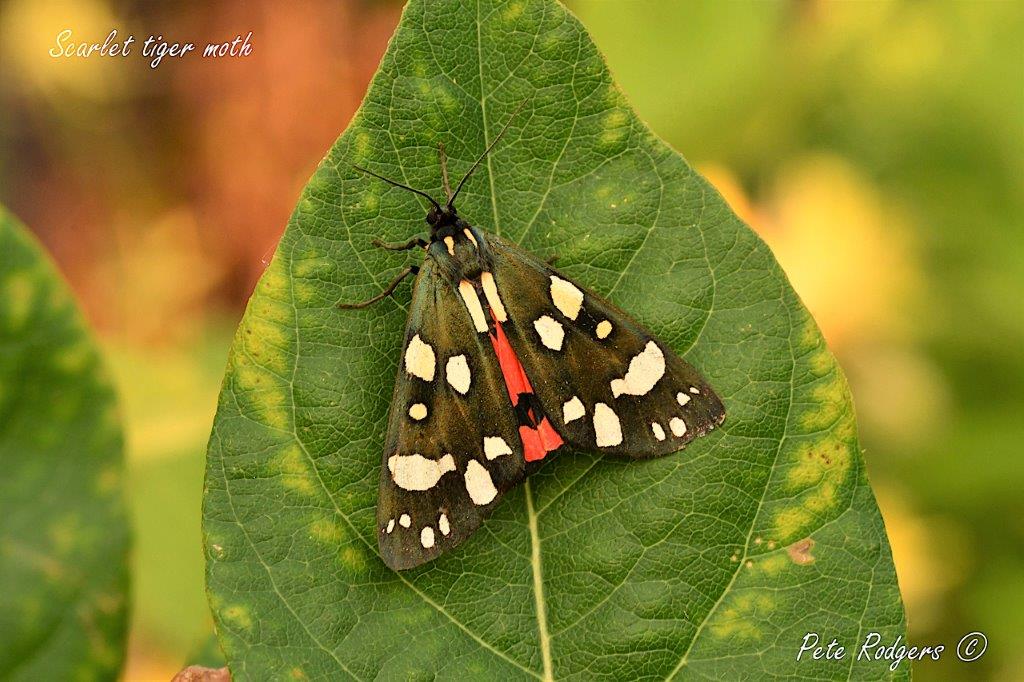 I have seen the scarlet tiger in Winchcombe before so this was no great surprise. More surprising was the discovery of a mating pair in the garden some three weeks later. Unfortunately, one had lost its antennae and part of its underwing although such deficiencies will not affect its ability to reproduce.

Scarlet tigers like damp woods and other wet places so I guess the River Isbourne offers suitable accommodation to this pretty and harmless moth.

Really surprising was the discovery, on the 8 June, a butterfly new to my garden list.  It was ‘collected’ for identification and I was more than a little surprised to find that it was a fritillary. But which one?  There are several different fritillaries to be found in Britain, some of them quite rare and they are certainly not considered garden butterflies.

This one turned out to be a dark green fritillary, which made a degree of sense as they can be found on Cleeve Hill in the Masts and Bill Smillie reserves. Many butterflies tend to exist in colonies, effectively isolated pockets of butterfly life that are unable to break out due to surrounding habitat loss. These are usually the more specialised species that require a certain plant for a larval food source, or in the case of some of the ‘blues’ a specific species of ant to care for the larvae. 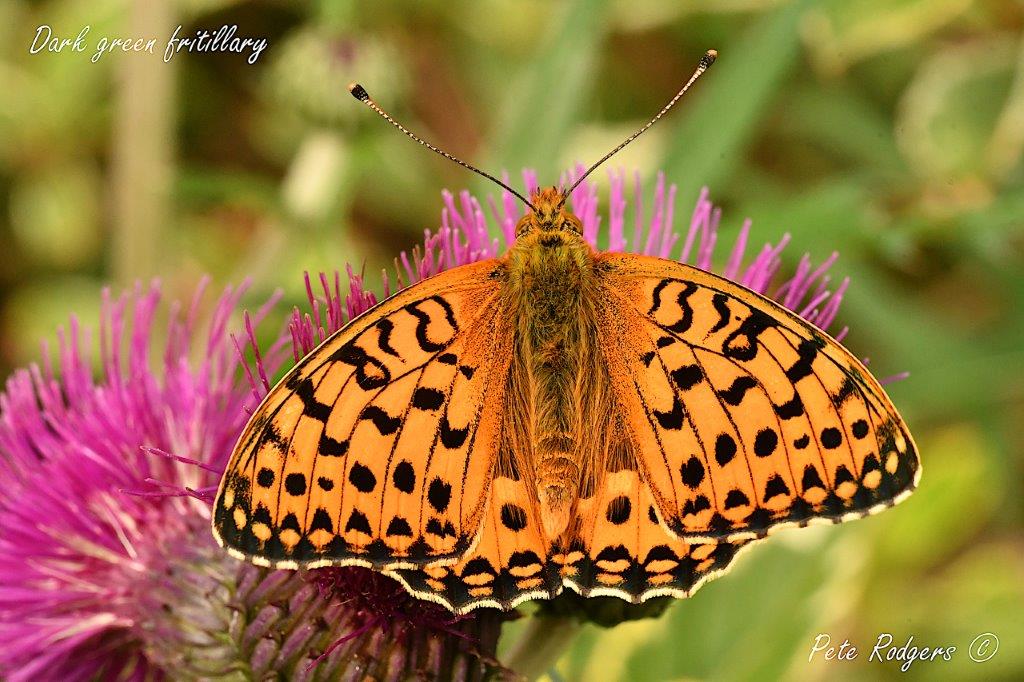 I can only assume that this fritillary experienced wanderlust and found its way from Cleeve Hill down into Winchcombe. Weather could have been a factor, perhaps it got caught up in a strong wind. Or may be a butterfly enthusiast has been raising some locally and gave them their freedom. It wouldn’t be the first time this has happened!  Whatever, it was quite a thrill to find one in the garden.

It’s a really beautiful butterfly as I hope my photograph conveys. It was, of course, released in the garden where it was found although given its circumstances, it is most unlikely that it will ever fulfil its primary function to procreate. There are 59 butterfly species in Britain; this one was number 22 on my list of garden sightings.

My wife was at it again when she brought to my attention a small bug in the garden. It was obviously an immature shieldbug, but again, of what species?  I soon had it identified as an immature red-legged shieldbug. These are also known as the brown or forest shieldbug and are usually seen once or twice in the summer months. The juveniles go through five stages of growth, called instars, before finally moulting into the adult form. This individual was a fifth instar, meaning it was close to its final moult. 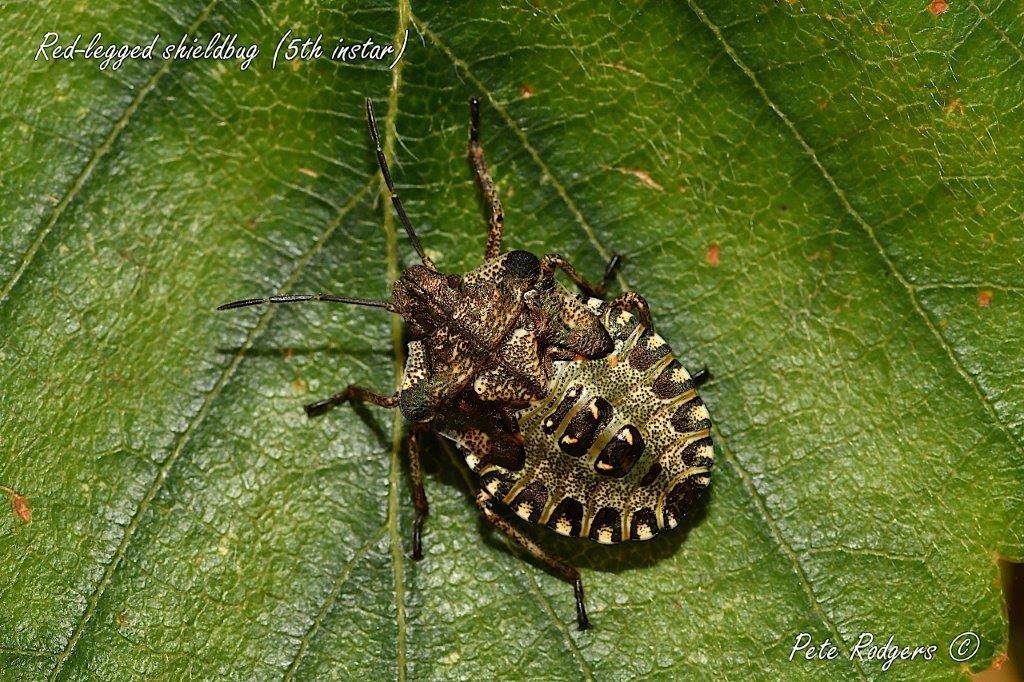 Shieldbugs are generally harmless insects but can cause some damage to plants if they occur in large numbers. In my experience they seem rather solitary creatures so I am happy to let them be and enjoy their presence when they decide to show themselves.

Being a bug, they do not have normal mouth parts like many insects but obtain their nutrients from plant matter by sucking sap rather than chewing stems and leaves. There are about thirty different species to be found in Britain, usually each species has its own niche in the environment. The red-legged, along with the hawthorn shieldbug, are the two commonest species in the garden although I have also recorded the birch shieldbug and on one occasion, a brassica shieldbug, an impressive black and yellow beastie.

Last time, I mentioned seeing a beautiful demoiselle damselfly along the Old Brockhampton Road, not far from Beesmoor Brook. This was a female but I’ve since spotted males on a ditch running into Beesmoor Brook and also from the bridge over the River Isbourne at Riverside. There are two species of demoiselles found in Britain, the banded and the beautiful. 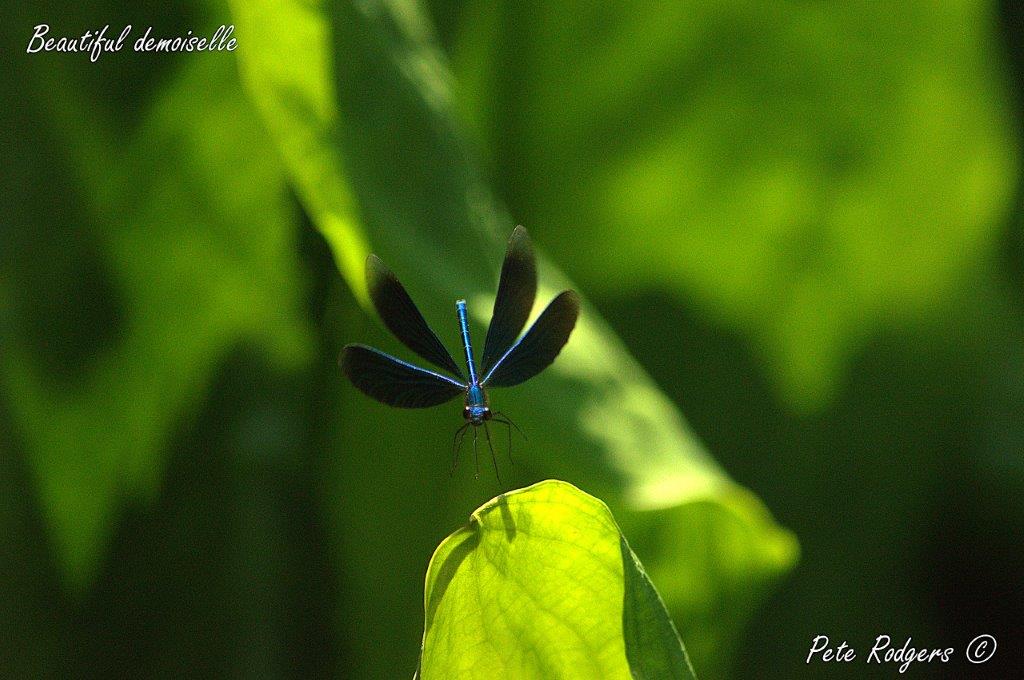 The males are particularly stunning insects, being a metallic bluish-green, depending upon the light in which they’re viewed. Banded males have, as their name suggests, obvious bands across the wings. Superficially the females of both species are very similar although wing colouration will split the species. My photograph is, I must admit, a bit of a fluke and not the best. I was about to take the resting insect when it took to the wing. If I’d known what was coming I would have arranged the camera settings appropriately as it is very tricky to get a respectable flight shot of these charming insects.

Whilst dragonflies are very strong flyers, often chasing around at break-neck speed, damselflies, on the other hand, normally float about rather more delicately and with little apparent effort. The demoiselles, however, flap their wings rather like a butterfly making them quite easy to spot.

And finally, I cannot finish this piece without mention of the leaf-cutter bee that set up home in a flowerpot in the greenhouse. It took a fancy to a flower pot which contained a re-potted saxifrage, suitably top-dressed with horticultural grit. The bee systematically removed most of the grit piece by piece and dropped it on the floor. It then proceeded to burrow into the soil and was observed carrying pieces of vegetation into the burrow. Having wrecked the plant’s root system with its actions, I emptied out the contents of the pot to see exactly what had been going inside. I found three egg cases, each about 15mm in length, neat parcels of rolled greenery, stuck together and sealed. Inside will be its egg and alongside will be a small supply of pollen and nectar to sustain the growing larva until it pupates and emerges next year as an adult to continue the cycle. 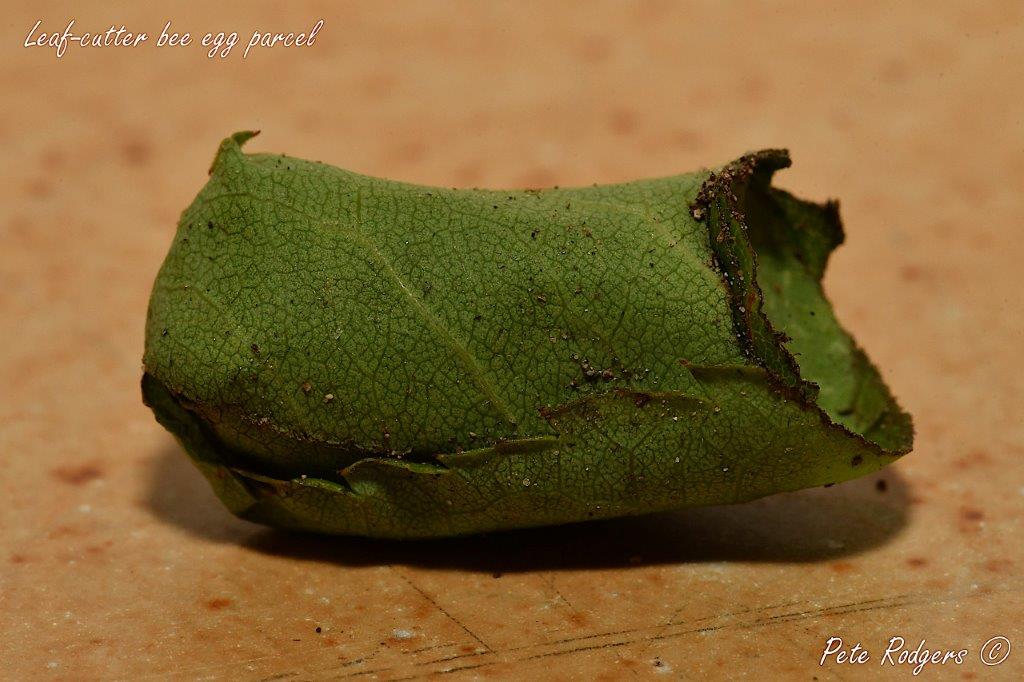 There are over 200 hundred species of bee in Britain; most, like this leaf-cutter are classed as solitary bees as opposed to social bees such as the familiar honey bee. I had always believed that it was leaf-mining bees that burrowed into the soil to make a nest chamber whilst leaf-cutter bees made use of an existing cavity. So this insect has crossed boundaries…..another example of evolution in nature.

What all of this demonstrates is that there is a wealth on nature on our doorsteps. Whilst it is always good to travel and find new sites of interest, there is still plenty to see locally if we remain observant and perhaps look at the smaller creatures that also inhabit our world.