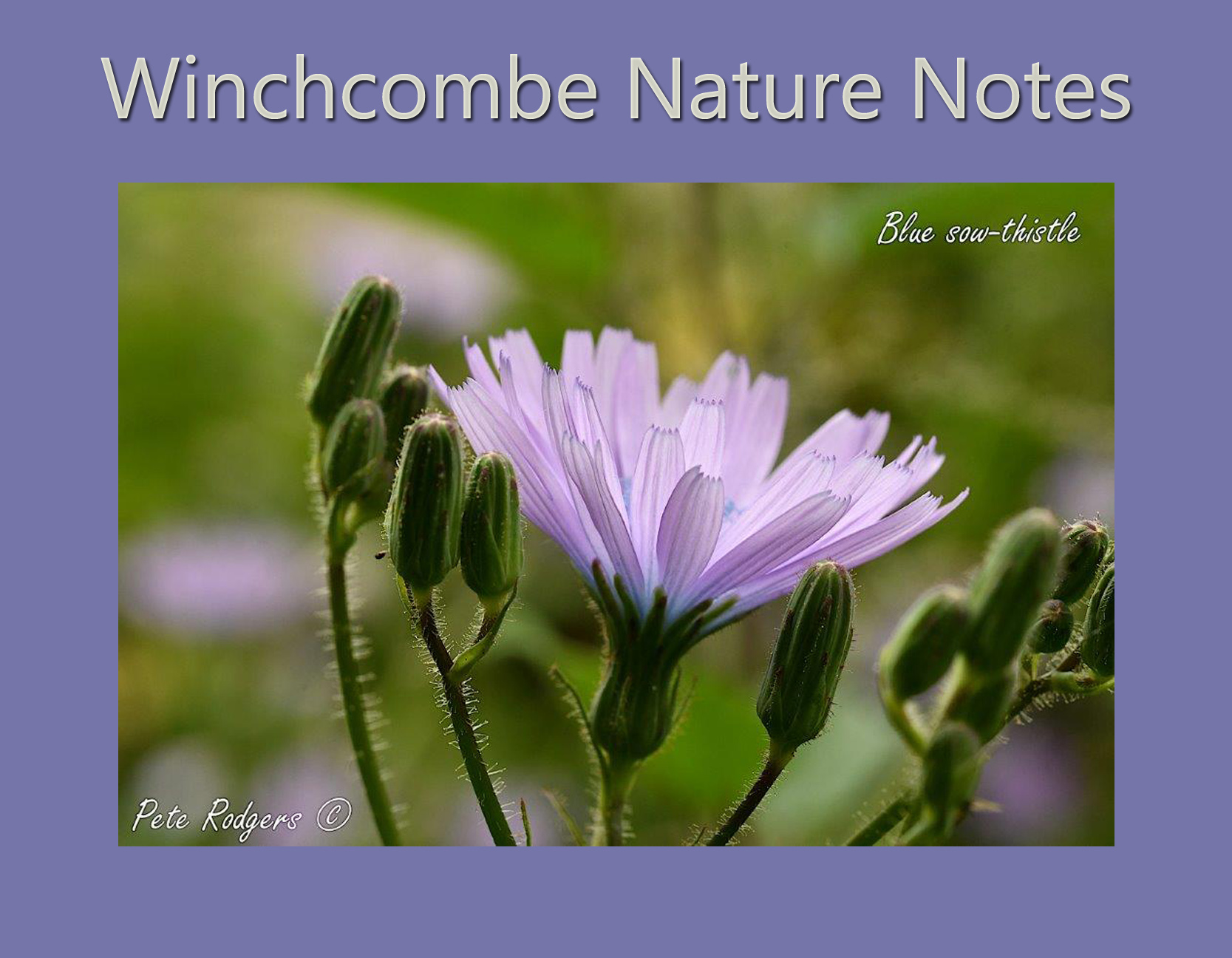 With a move of house dominating my focus over recent weeks, nature has taken something of a back seat. It’s still there though and some interesting finds have materialised from almost nothing.

Keeping one’s eyes open even on a walk around the lanes can produce items of interest.

I have been fascinated by flowing water for as long as I can remember and always have the need to look over the road bridge at Riverside to see if anything is on the river.

A couple of weeks ago, when the sun was shining, there were four male beautiful demoiselles flitting about, rather like butterflies. I have mentioned these before in Nature Notes as they were present last summer. Not the same ones, of course, but their forebears.

The males are stunning insects. Their blue body and dark wings give away their presence when they fly. They are quite unlike any other insect, with the possible exception of the banded demoiselle, which has paler wings with an obvious dark band across each wing. 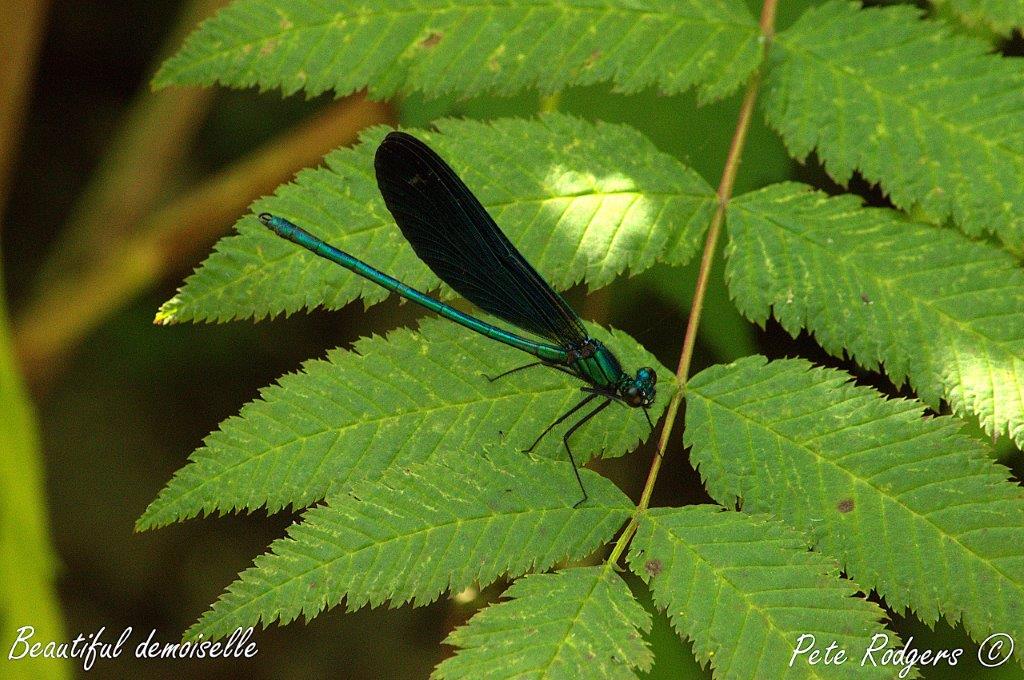 Males will perch on streamside vegetation to await the arrival of a female. She has a metallic green-bronze body with transluscent pale brown wings.

I’ve never seen a female at Riverside but did see one further upstream on the Isbourne, near the football ground a few days ago.

Demoiselles are, in fact, damselflies and are closely related to dragonflies. The latter are larger and faster flying, damselflies exhibiting a far more gentile and lady-like approach to life. Perhaps that’s how they acquired the damsel prefix!

The female deposits her eggs on vegetation in or alongside the river. The eggs hatch into nymphs which will spend two years in the river before emerging as adults. Both nymphs and adults are ferocious predators within their own world.

Another repeat siting was of the scarlet tiger moth. These are day-flying moths and are most distinctive in flight. Easily mistaken at first for a butterfly, their underwings flash scarlet, quite unlike any butterfly to be found in Britain. 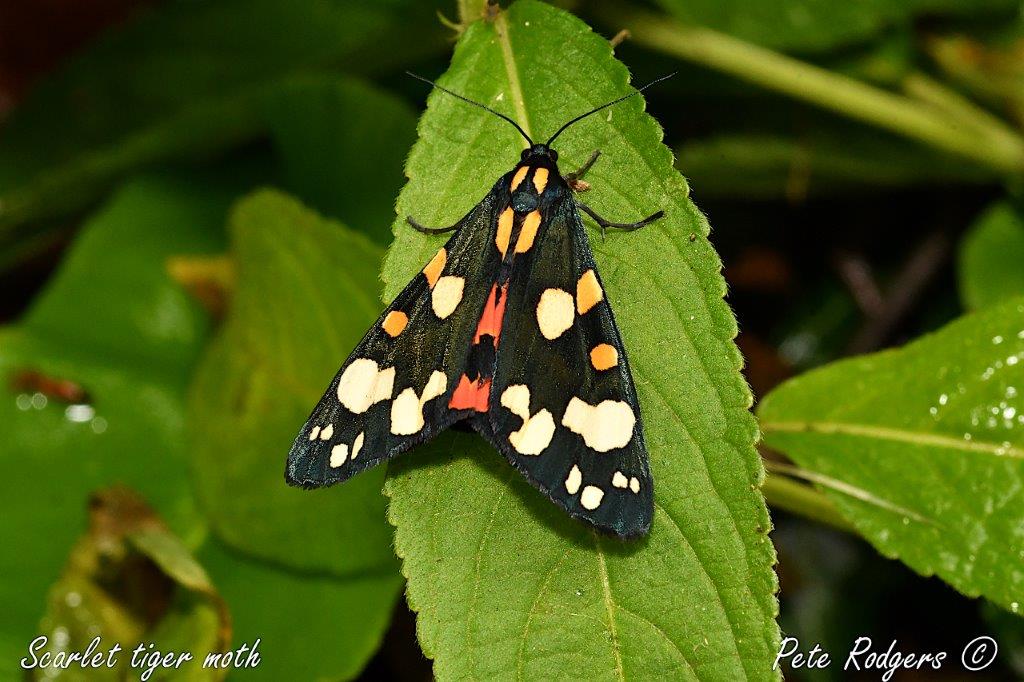 They prefer damper areas and probably originate in the environs of the Isbourne. As they fly they make their way into town as the two I saw were both on Abbey Terrace!

A walk through the grounds at Sudeley Castle took me over the bridge and across the lake formed by the damming of Beesmoor Brook. The collapsed weir has now been repaired and the lake is now starting to look more like a lake than mud-flats.

Whilst leaning over the parapet I was most surprised to see a female mandarin duck with five young ducklings. Not that mandarin ducks are unusual in our countryside nowadays, just that I’ve never seen them around Winchcombe.

Mandarin ducks are an introduction to Britain from Asia. The drakes are brightly coloured ducks when in full breeding plumage; the kind of creature that you couldn’t make up. Females are much plainer, being a greyish-brown. 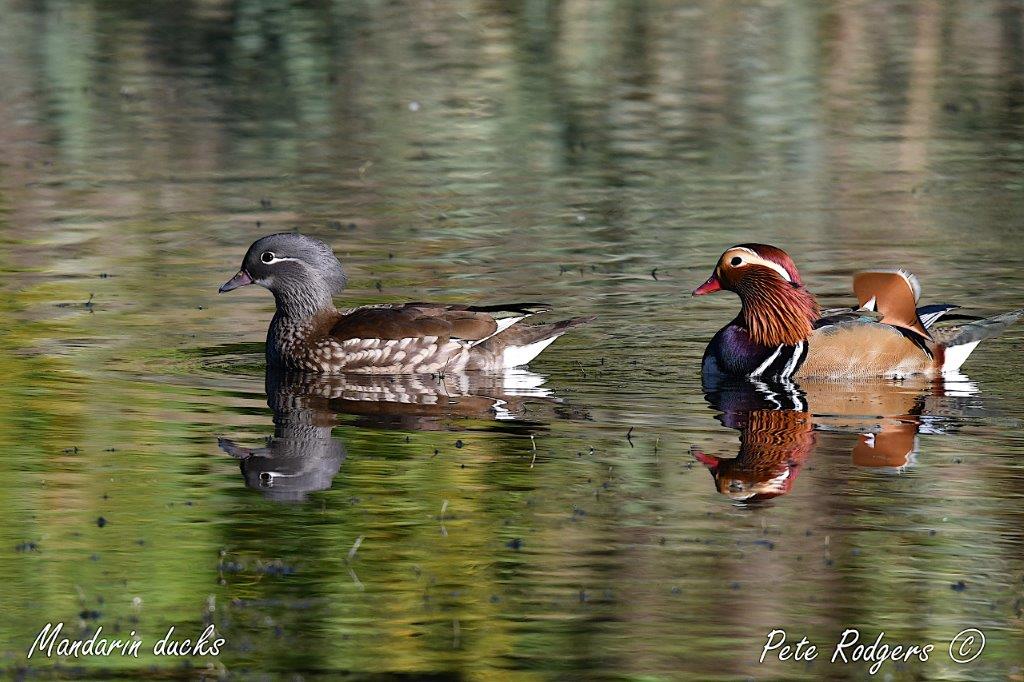 Interestingly they are a species that breeds in trees, unusual but not unique in the world of wildfowl. Actually, its holes and cavities in trees that they utilise which is fine until the young have to leave the nest and jump to the ground.

With such small ducklings, only a few days old at most, it seems obvious that these birds have bred locally.

The female will lay up to twelve eggs that are incubated by her alone. The male will defend the nest site if necessary but abandons the site before the eggs hatch. It’s therefore up to Mum to look after their welfare until they are old enough to fend for themselves.

The stronghold in Gloucestershire for mandarin ducks is in the Forest of Dean. I have seen as many as fifty at Cannop Ponds before they disperse for breeding. It is probably as well that they have become established in Britain and western Europe as numbers are dwindling in their Asian homelands.

The walk also produced an interesting find in the form of a small group of blue sow-thistle plants growing on some waste land at the foot of Castle Street. 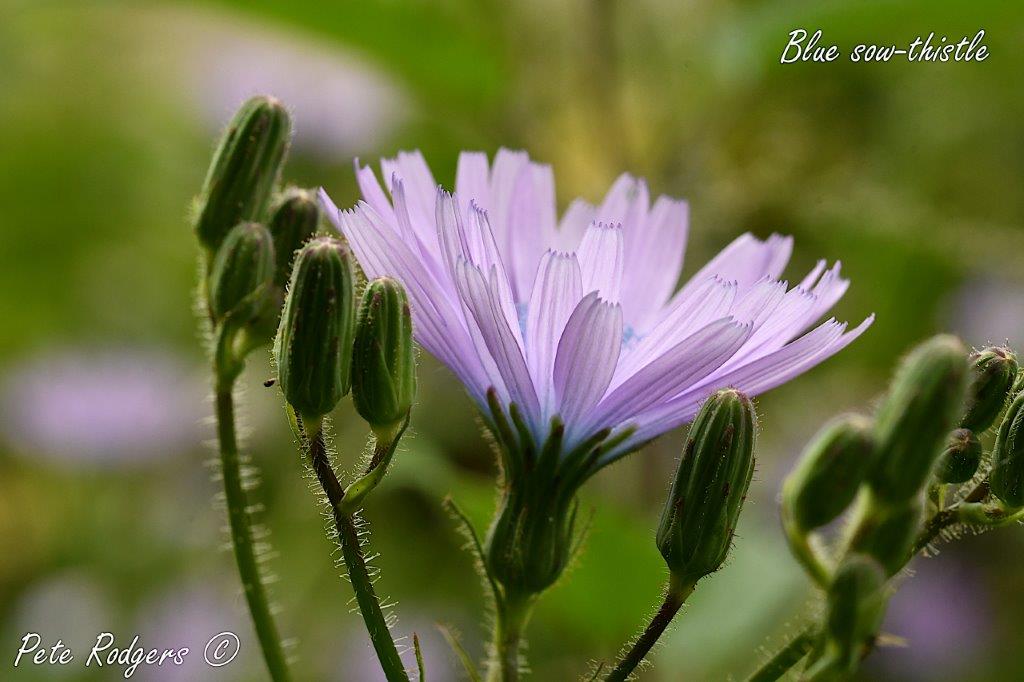 Never having encountered the plants before I was, at first, a little flummoxed as to their identity. A search of the internet and my reference books eventually produced the answer.

Growing to between 2 and 2½ metres in height and producing beautiful lilac flowers, they would make a fine addition to the back of a border in the garden.

And that’s how this plant finds its way into the countryside. As an escapee from a garden, seed can germinate and create a new colony where perhaps it isn’t wanted. The plants spread through their underground network of rhizomes so may prove awkward to eradicate if necessary.

It’s always good to find something new, so I was well pleased with this discovery on my doorstep. 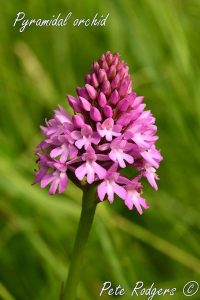 Another was a colony of pyramidal orchids growing in the roadside verge just to the north of Littleworth.

On my regular try-to-keep-fit bicycle circuit I noticed the verge dotted with these deep pink flowers and I returned to see exactly what they were. (Identification is not always easy from a speeding cycle….ok, a somewhat less than speeding cycle).

The flower buds of pyramidal orchids are triangular in shape, gradually becoming more cylindrical as the flower ages. They are one of the most common orchids in the UK.

A count suggested that this colony numbered more than one hundred flowering plants and although I have passed this spot many times before I have never seen these plants there.

This is not unusual as the appearance of orchids can be very erratic. The wind-blown, dust-like seed can lie dormant for years which accounts for the plants suddenly appearing quite unexpectedly in places where they have never-before been recorded.

And to round matters off for these notes I chanced upon a large and very distinctive caterpillar. White and covered with black and yellow spotting, it was the larva of the mullein moth. 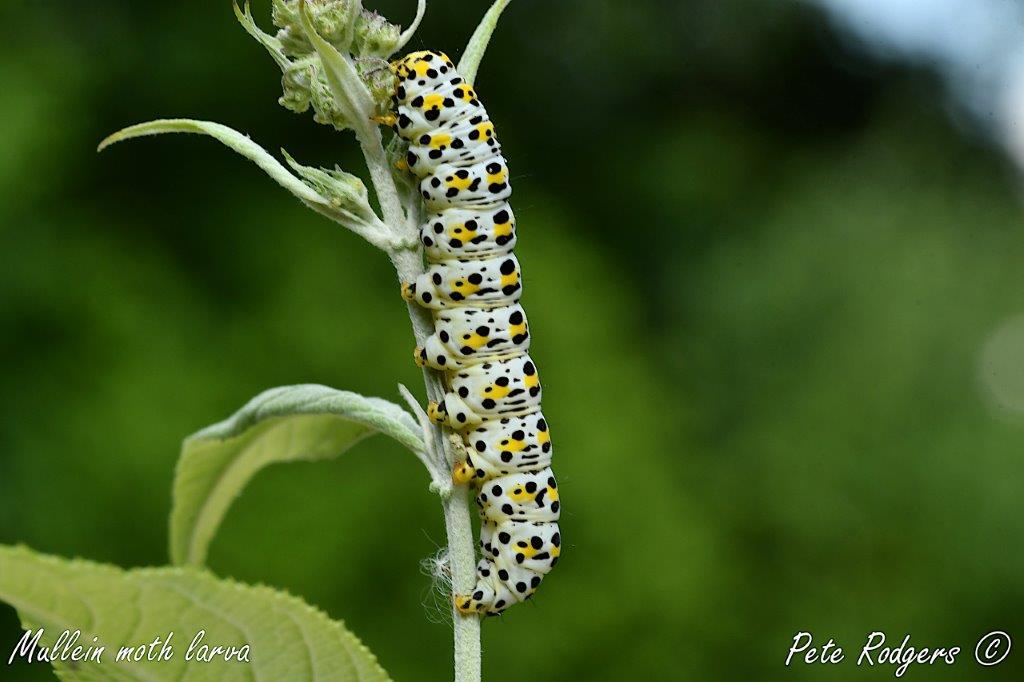 As with so many showy caterpillars, the end product (the adult moth) is somewhat dull and uninspiring.

This beast was feeding on an ornamental buddleia in a garden. It is not unusual for this species’ larva to be afoot during the day. It probably relies on its bright colours to discourage potential predators. Hiding in plain sight, so to speak.

This larva was certainly worth a picture so it was duly photographed for posterity. It will be fully grown at 30 days and will then make its way to the ground where it will burrow into the soil and form a hard cocoon from its outer skin.

It may stay like this for several years before the adult moth emerges. As with many insects, therefore, it will only spend a small part of its life as an adult.

With the legal restrictions on our freedoms being reduced further on the 19th we should be looking towards a more normal life. But with Covid cases increasing I suppose I once again need to say ‘stay safe’.