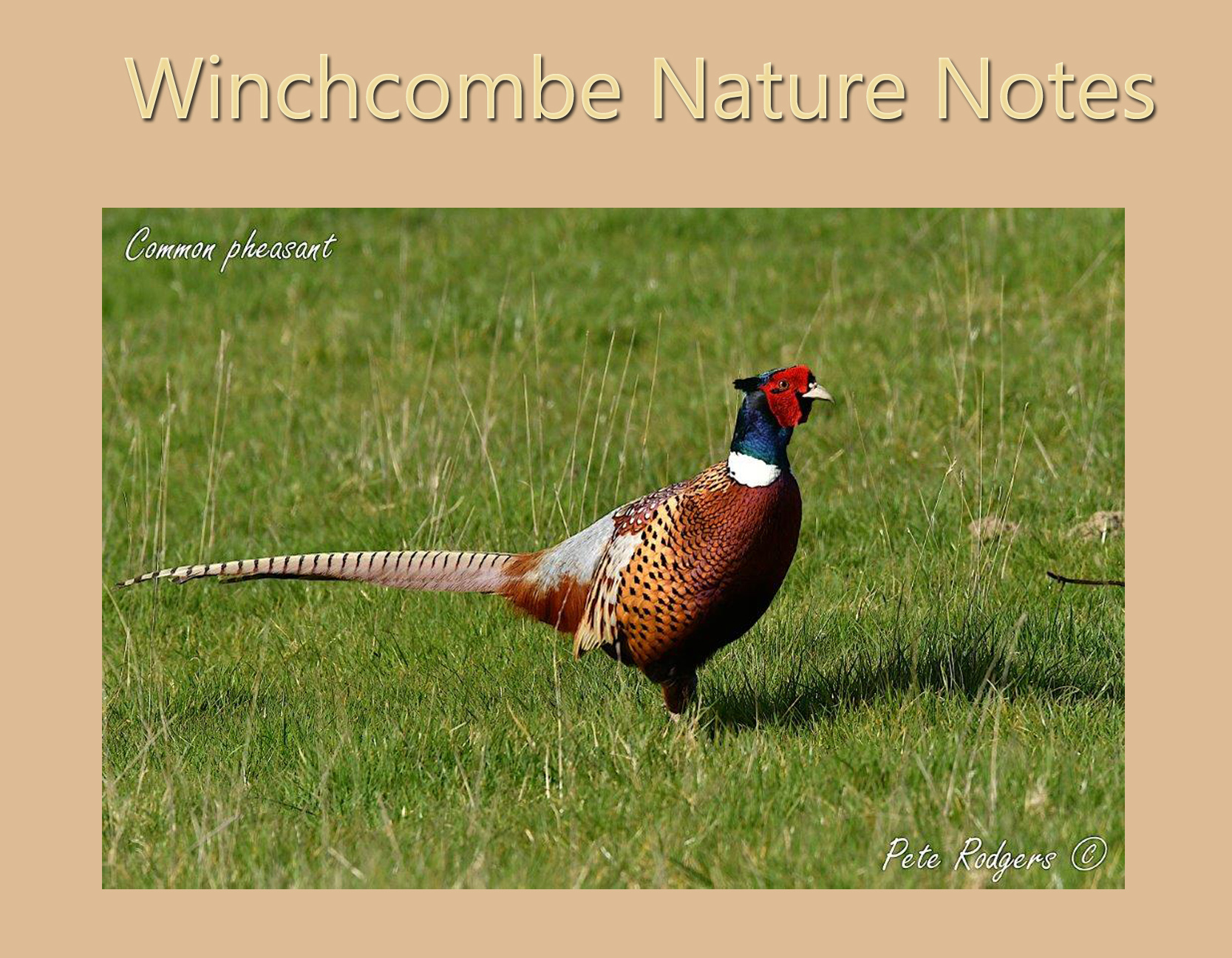 We are now well and truly into spring, indeed into the second month meteorologically speaking. The last few days of March seemed more like summer with temperatures well into the high teens in places.

This warm weather will have brought on plant growth but it was always only going to be short-lived at this time of the year and with a return to more realistic temperatures over Easter, growth will be halted in its tracks. 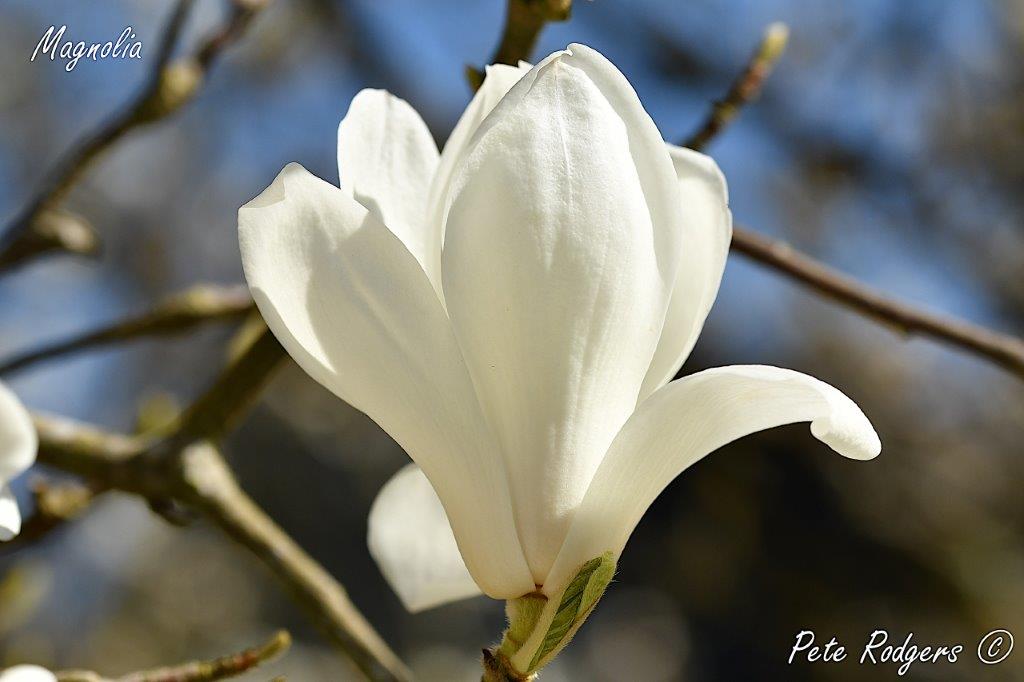 I have seen some beautiful magnolia blossom in gardens around Winchcombe and if we get the forecast wintery weather then this blossom will suffer, being transformed from bright pink to an unattractive brown mess. Likewise, the flowers on my plum tree will suffer, killing hopes for a bumper crop in late summer.

The warmer weather has brought out over-wintering butterflies from their hibernation. A superb male brimstone gave my spirits a lift when it fluttered through the garden on 16 March. The warmth of the 31 March produced a second male nearby, both no doubt looking for a female with which to mate before passing on to that great butterfly garden in the sky.

However, the star butterfly of the month for me was the holly blue seen in my garden on the 31 March.  These little gems do not usually show themselves until April is well underway, so I was well pleased to see this one. 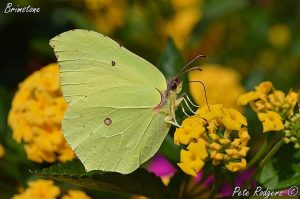 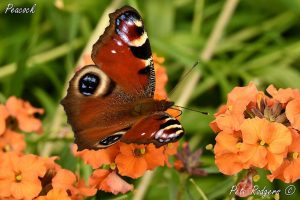 I’ve also seen several small tortoiseshell butterflies on the wing and I rescued a stunning peacock from my greenhouse on the 24 March.  It sat quietly in my hand before moving along to perch on my index finger, where it stayed for several seconds before taking flight.

On the same day I recorded the first bee fly of the year. These interesting insects are flies, masquerading as bees. Looking superficially like a smaller bumble bee, they hover in front of suitable flowers, taking nectar with their extended, sword-like proboscis or ‘tongue’. Two species occur in my garden, the dotted bee-fly and the dark-bordered bee fly, the adjectives referring to the markings on their wings.

Earlier in the year I discovered a caterpillar floating in a bucket of water in the garden. I dutifully rescued the hapless creature in the hope of putting a name to it. No such luck! Within a couple of days it had pupated and this, ultimately, gave me the opportunity to find out exactly what it was. 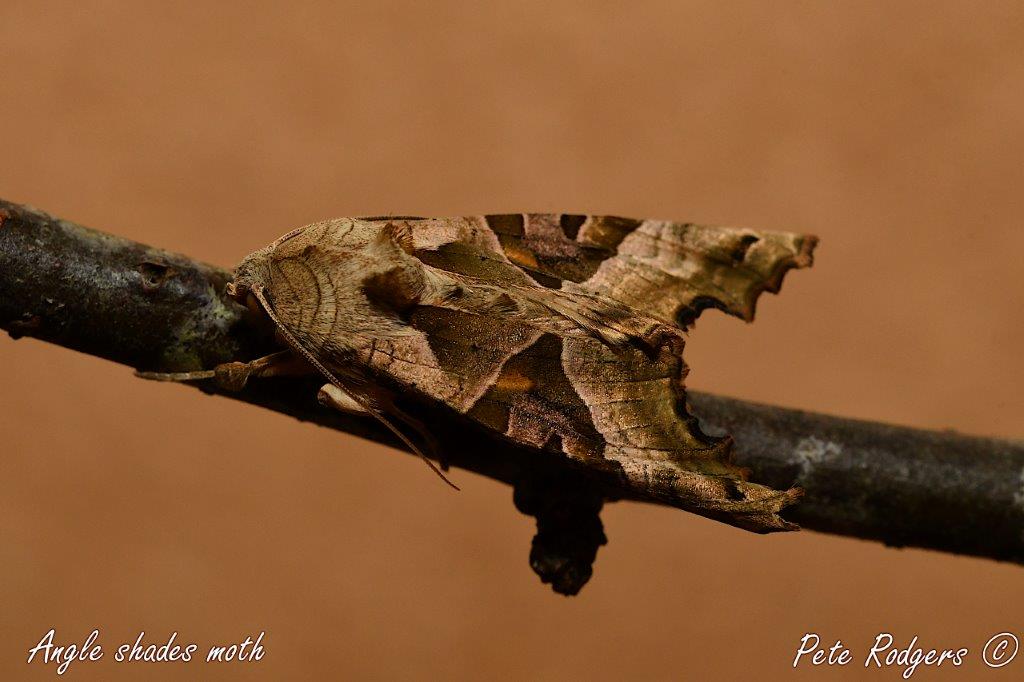 My patience was rewarded as within 3 – 4 weeks a beautifully marked angle shades moth had emerged. I have found these moths before in the garden so this was no great surprise.

After the statutory photos had been taken indoors, I took it into the garden to prepare for its release. Placing it on the bloom of a winter-flowering honeysuckle, I was pleasantly surprised to see it move around the flower and start taking nectar with its proboscis.

Angle shades are nocturnal moths and, checking the following morning, it had unsurprisingly moved on.

Our spring flora is going through its annual rota. Snowdrops seem a distant memory already and daffodils are starting to fade. I was aware of finding daffodils growing on Cleeve Hill several years ago and couldn’t decide then whether they were the true wild variety or not.

I therefore made a return visit to see if I could find them again and to hopefully get a positive i/d. A friend told me they were still in-situ so armed with a camera and a little more knowledge, I set off. And the good news is that these daffodils are the real thing – genuine wild daffodils and not an introduced cultivar.

Gloucestershire is well known for its wild daffodil populations but these are to the west of the Severn, nearer to the county boundary with Herefordshire. There is a well-known daffodil trail around Newent & Kempley and the area had some good publicity on ‘Country File’ at the weekend as a result.

The plants are now quite rare and Gloucestershire is one of a very few areas where they can be found. The Lake District is perhaps the best known, thanks to Wordsworth and his writings about ‘the host of golden daffodils’.

It was whilst dead-heading the faded daffodil blooms in my own garden that I found a ‘first’ for the garden in the form of a hairy shieldbug. I appreciate that these little creatures may not be to everyone’s taste but they form part of our varied flora and fauna. 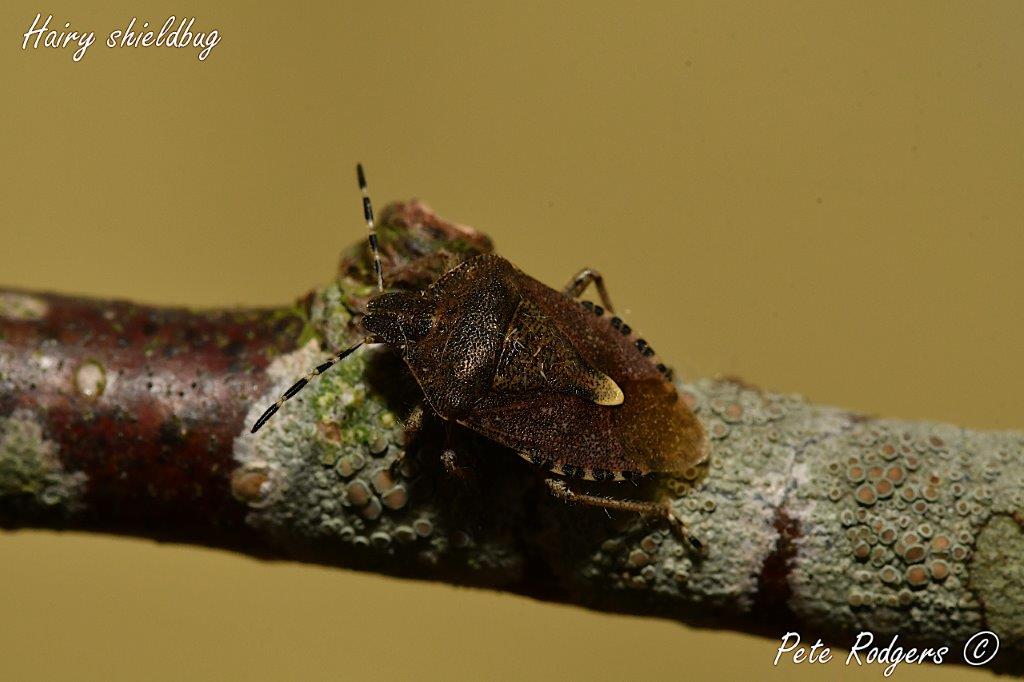 The common species of shieldbug I usually find are the hawthorn shieldbug and the red-legged or brown shieldbug. The hairy shieldbug is considered common, but not where I’m concerned so it was an interesting find. It proved rather tricky to photograph, clearly camera-shy. However, after a short period of training it was duly photographed and released back in the garden at its point of capture.

It was whilst on a walk near Westwood that I encountered something else that was new to me. On the woodland floor was a furry/bristly object, reddish-brown above and white underneath. It looked like the tail of something, but what.

Rabbit, hare, stoat. weasel, fox and badger were all quickly considered and pretty much rejected in my mind. This left deer, which do inhabit these woodlands. Roe, fallow and Reeves muntjac are our commonest deer in Gloucestershire. 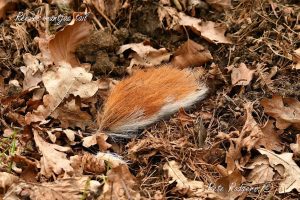 I therefore contacted the British Deer Society and canvassed their views on my mystery find.  They promptly replied that it was the tail of the Reeves muntjac deer although they could offer no positive  explanation as to how and why it became separated from its owner.

Deer do not drop their tails so what happed to its owner can only be guessed at.

Like the rest of the country, I am now keenly awaiting the next stage of the easing of lockdown. I have occupied my exercise periods with very local ‘trips’ with my camera, photographing mainly spring flowers and now I can’t wait to go further afield. Migrant birds are arriving in ever increasing numbers, new season butterflies will be emerging and next month will see the first damselflies and dragonflies on the wing.

So, to enjoy these natural delights make sure you get ‘the jab’ and stay safe.