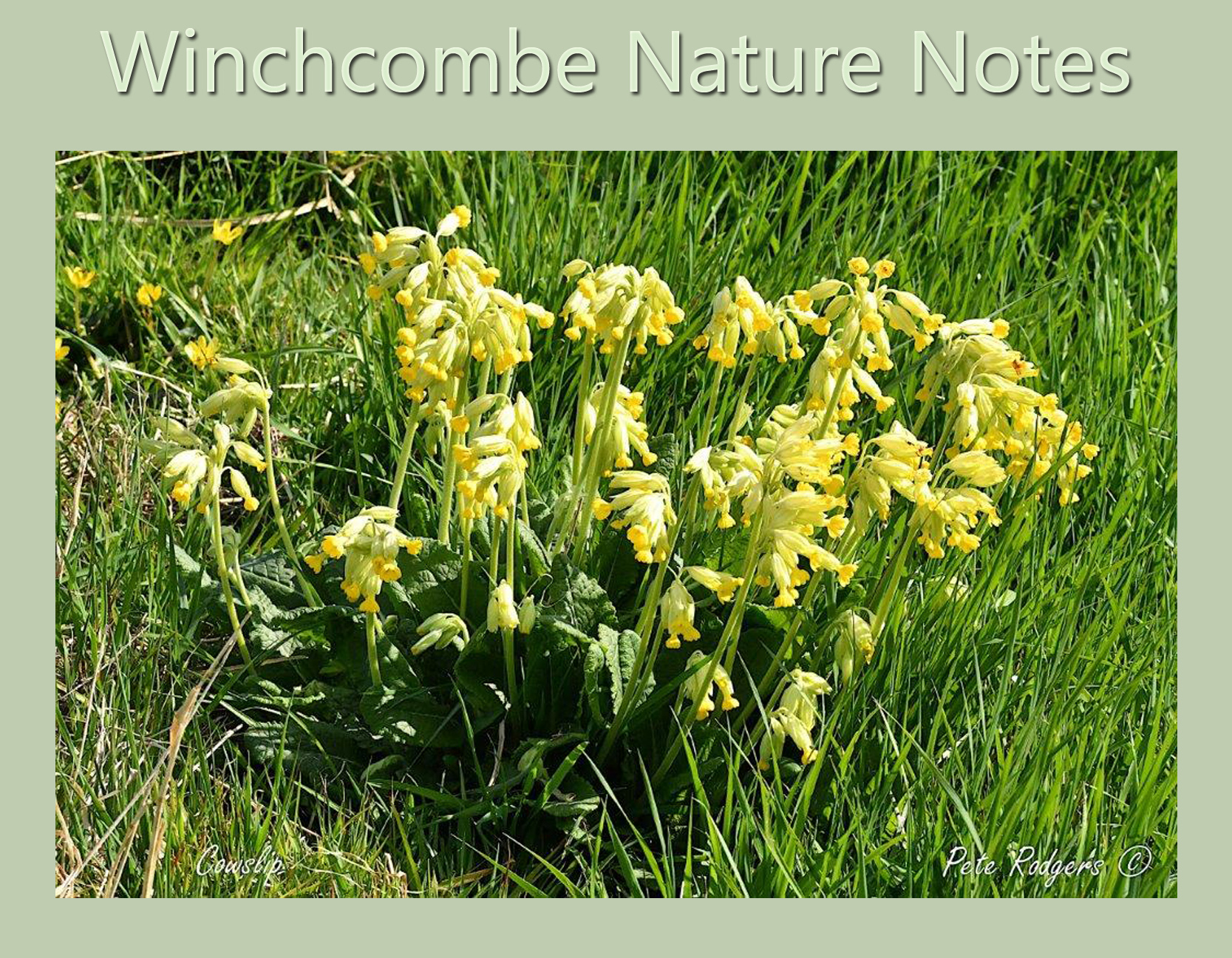 We continue to suffer the effects of the coronavirus lockdown which have impacted upon everybody. It’s typically ironic that we have had some of the best April weather that I can recall and yet we are unable to enjoy it to the full. Those of us fortunate to have a garden can at least sit out and enjoy the plants and wildlife that it attracts. The able-bodied can still walk the local footpaths as part of their exercise routine. Even a walk on the pavements around Winchcombe’s streets offers an insight into nature. It’s quite amazing the amount of flora that survives in the gutters and on walls, enough I’m sure to fill a pocket guide. 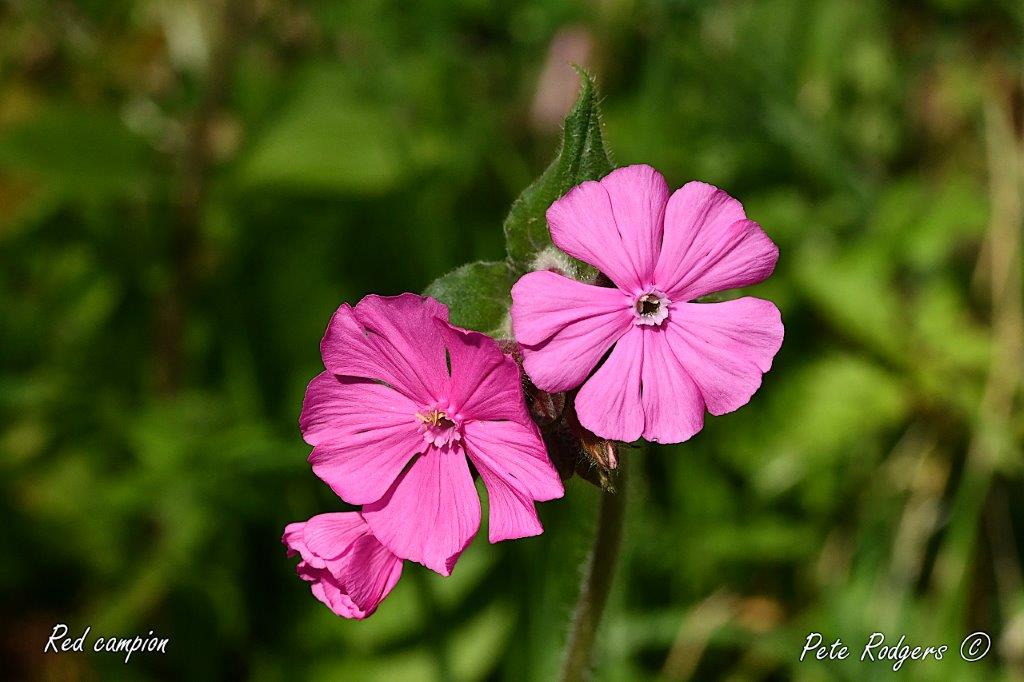 Plant life has really come on apace with all the good weather we have experienced. In the hedgerows and field margins bluebells and cowslips are looking superb, cow parsley is springing up everywhere whilst cuckoo-pint and stitchwort support the understorey. Red campion is pushing through, the first plants already showing their early blooms. And all the plants attract insect life, the most obvious being the butterflies. 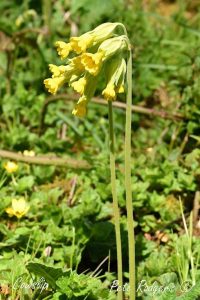 The two earliest butterflies to emerge from overwintering pupae are the orange tip and the holly blue. The male orange tip is easily recognised, a small white butterfly with very obvious orange tipped wings. The female is perhaps not so easy, being mainly white. Their larval food plants are cuckoo flower and garlic mustard, also known as jack-by-the-hedge.  The holly blue is a little blue gem that  is unmistakeable and the first of the ‘blues’ to be on the wing and almost certainly the only blue butterfly to visit urban gardens. Its larvae feed on ivy and holly. I’ve seen so many of both this year passing through the garden that I can’t help feeling it’s going to prove to be  an excellent year for both species. This, of course, is a reflection on last year’s successful breeding. 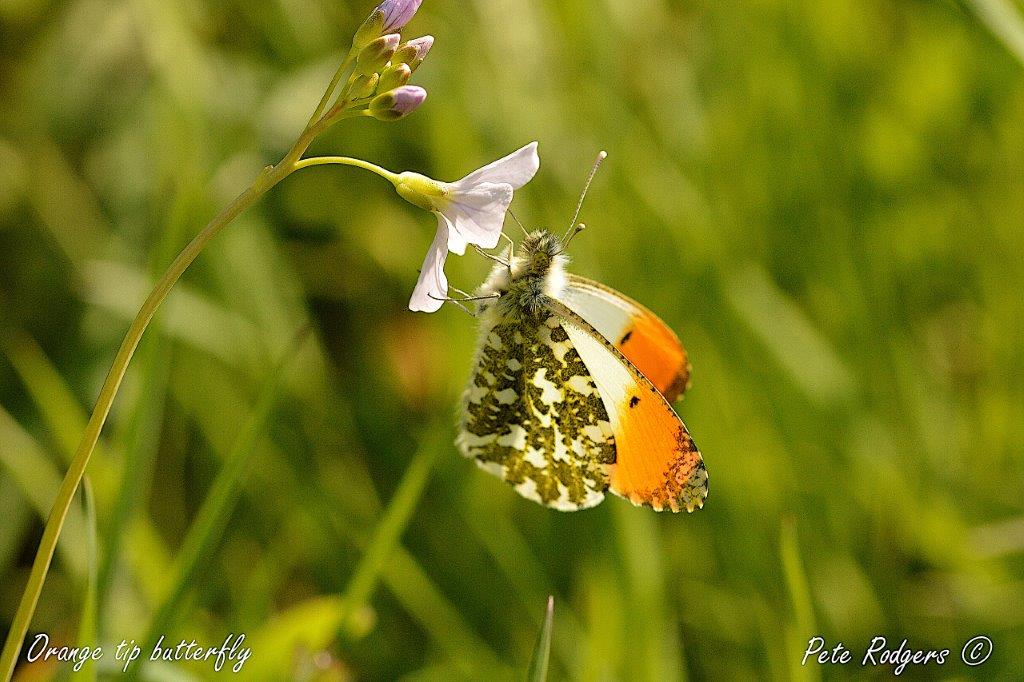 The orange tip is single brooded, meaning that only one generation appear each year. When the adults die, by about mid-May, we’ll have to wait until next spring for their progeny to brighten our lives again. The holly blue, however, is double brooded meaning a second generation will appear later in the summer. Progeny from this second brood will appear next spring and the cycle will continue.

Other butterfly species are also now starting to appear and I have already seen the large, small and green-veined white, along with speckled wood. The latter are interesting in as much as a male will be faithful to its territory and defend it against all-comers. It’s fascinating to watch two butterflies in dispute, spiralling ever upwards until one or the other is moved on, allowing the victor to return in triumph.

Bird song is another reminder that the world is still turning. The regular songbirds such as blackbird, robin, wren and dunnock are now joined by chiffchaff, blackcap, willow warbler and, joy of joy, the cuckoo, which I heard on April 23rd. I’ve also seen (briefly) and heard the lesser whitethroat but not yet its close relative, the common whitethroat.

Blackbirds have obviously nested locally as I have seen young birds in the garden.  It’s really interesting to see how bird habits evolve over time. There are some fat balls suspended from a feeder in the garden and this food source was once the domain of the tits. Now, however, the blackbird has mastered the art of gripping the feeding cage and accessing the booty inside. It is less dexterous than the smaller, more agile tits and its beak is rather too long to take the food straight from the fat balls so it chisels pieces off. These then fall to the floor so the blackbird merely drops down to the ground to pick them up. I have watched as it feeds them to its young, who sit patiently underneath the feeder. But the blackbird has to be quick as the ever watchful wood pigeon will grab these morsels first if given the chance. I have noted that within seconds of a blackbird starting to feed on the fat balls a wood pigeon will follow it into the garden and take up position underneath, awaiting its free meal.

Although the blackbird first appeared with two chicks, this was quickly reduced to one. I was in my greenhouse when I was startled by a very loud thump which left me perplexed as I could see no obvious cause for it. My wife saw what happened. The young blackbird had flown into the greenhouse door at speed, causing instant death. Surprisingly though, it had flown into the solid part of the door, not the glass. It’s the kind of mistake it can only make once. 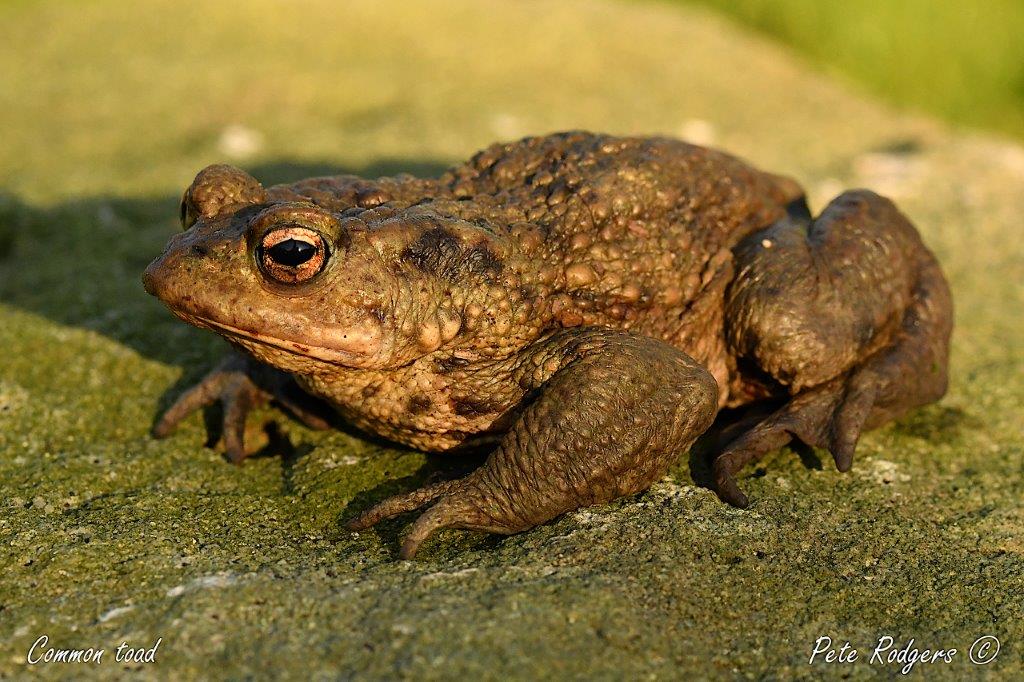 The garden has also brought forth other highlights over the past month. Firstly, at the very end of March I discovered a common toad. I think I must have disturbed it from its hiding place in the compost bin as it would be most unusual to find one wandering about in full sunshine. I only occasionally find toads in the garden, more often frogs. Inevitably this is due to the proximity of local garden ponds. Both are most welcome in the garden as they will help to keep the slug population under control.

Secondly, I saw a bank vole in the front garden once again. I saw one about two years ago but nothing since. This charming little creature was nibbling the emergent shoots of geraniums and taking them into a hole in the boundary wall where presumably it was building a nest. I find voles much more appealing than their near relatives, mice. This snub nosed little rodent with a short tail hasn’t been seen since but I suspect that it is more active at night. Of course, it could have fallen prey to the local cat that uses my garden as both a thoroughfare and latrine. Apart from these habits, domestic cats are responsible for a huge mortality of wildlife annually, with a death toll estimated at 100 million nationwide. I still fail to understand why cat owners think it perfectly acceptable to allow their pets to roam at will over the local neighbourhood in a totally unregulated fashion.

It is known that many of our familiar garden birds suffer a high mortality rate each year for a range of reasons, cat predation being only one. Blue tits, for example, can lay up to ten eggs in a clutch and can easily produce two clutches in a season. If all survived we would be over-run with blue tits in a couple of years. Large broods enable the species to cope with such losses. After all, only two need to survive to maintain a stable population. Cats are likely to catch the weakest and it could thus be argued that this will ensure only the fittest survive, thus maintaining a healthier population amongst survivors.

Thirdly, a new bird for the garden arrived in the form of a red-legged partridge. This was seen on two occasions and was a pleasant surprise. It is now not unusual to see a pheasant in the garden, but the partridge was a welcome first. Many birds of both species are put down each year for shooting and those that avoid the shotgun will wander when their artificial food supply is withdrawn so it shouldn’t be too much of a surprise when they turn up in domestic gardens. 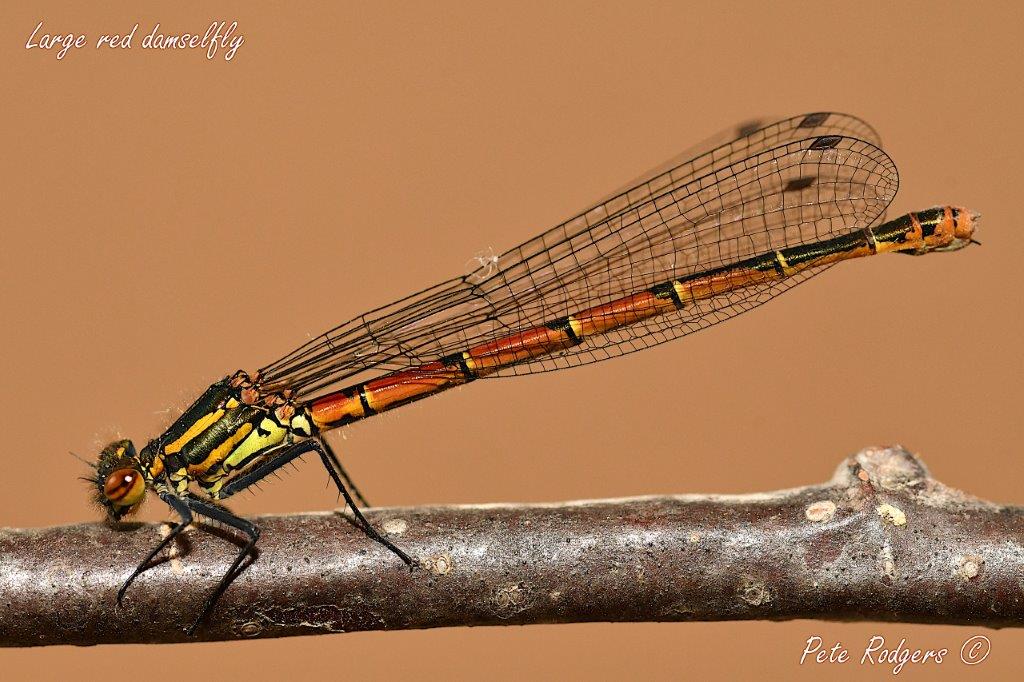 Lastly, a surprise find later in the month occurred when a damselfly was discovered up against the inside of the lounge window. It’s usually other types of flying insects that get trapped indoors and this is the first time a damselfly has crossed my threshold. Damselflies are related to dragonflies and are, in effect, a smaller and daintier version. They spend two or three years as nymphs living in ponds or other still or slow moving water. As nymphs they are underwater assassins, preying upon a wide variety of other water life. Prior to emergence, the nymph climbs the stem of a water plant, splits its larval case and climbs out. It will then expand its body and wings and dry out before flying off as a beautiful and colourful insect. The damselfly in my lounge was a ‘Large Red Damselfly’, quite common and the earliest to emerge in spring. Large is relative as the insect was still quite small so I carefully photographed it before safely releasing it into the garden. Scrutiny of its markings revealed it to be an immature female. It will be relatively short lived so will need to mate and lay eggs before its demise to ensure continuance of the species.

So, despite lockdown, there is still nature to be discovered close to and, sometimes, inside our homes.