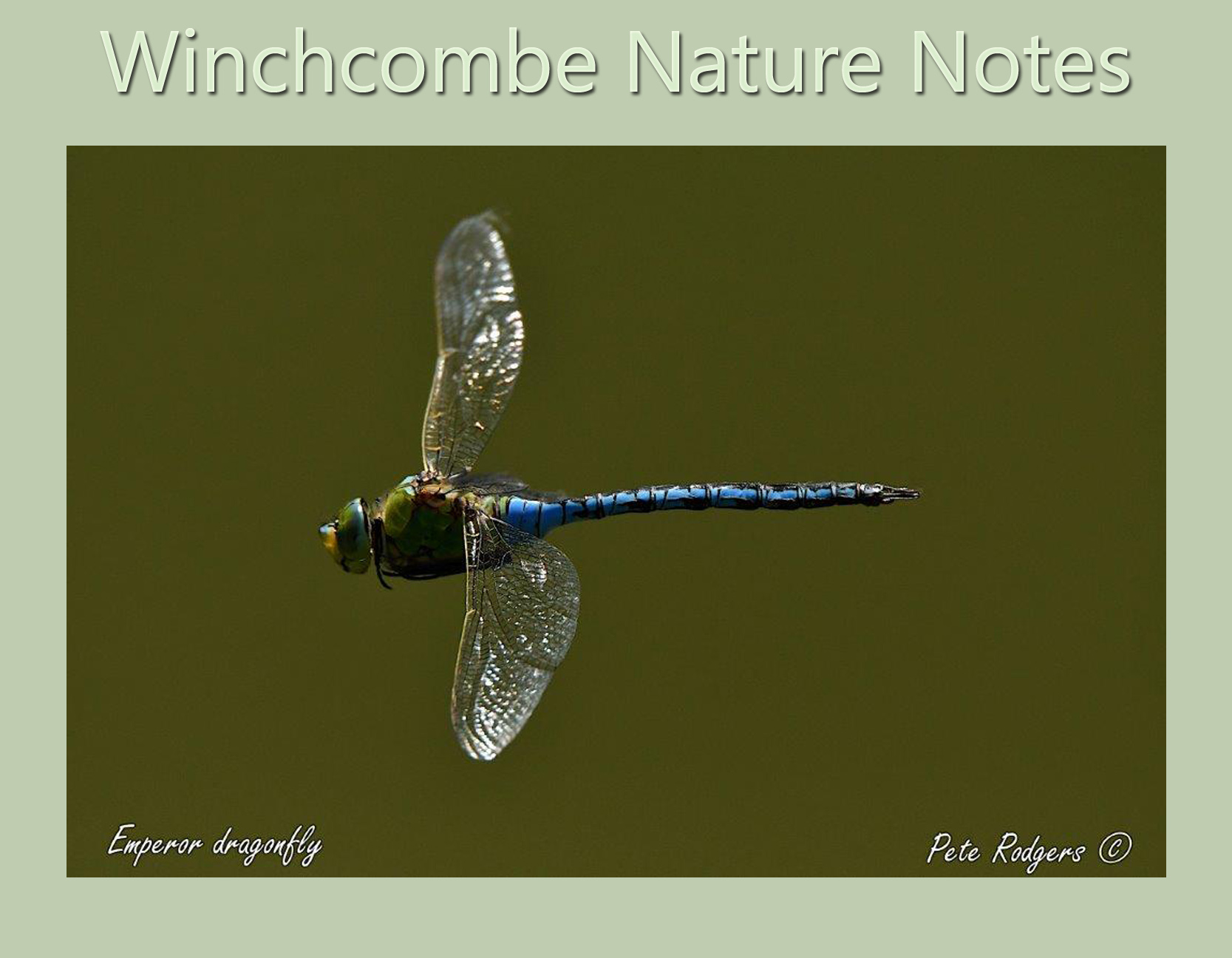 The natural world, like us, has had to cope with some extremes of weather during August; from a mini heat wave with temperatures in the thirties to dull, overcast, rain filled days with temperatures struggling to reach the mid-teens.  But cope it does. Although the countryside now is very quiet, nature is still there but it can take a little more effort to find it.

Earlier on in the month a hummingbird hawkmoth made an appearance in the garden for the second time this year. Conversely, these moths are quite easy to spot if they are about. Like a small hummingbird they hover in front of flowers, dipping their long tongue deep into the flower to drink its nectar. They quickly move from flower to flower and then suddenly are gone, off over the garden fence to pastures new. 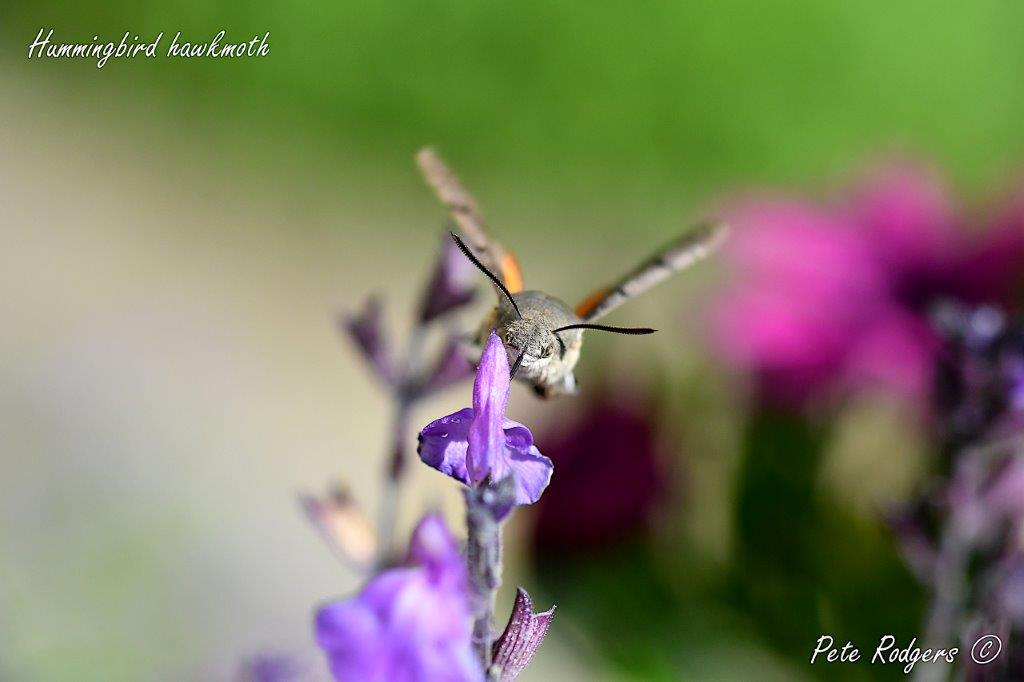 These moths are migratory, moving up into the UK from continental Europe each spring. There is a website where people can add their observations and it is interesting to see the moths’ progress up through the country. It is believed that these moths cannot survive the British winter but with increasingly mild winters this view may change. A ‘hummer’ was found in my garden last year on 1 December! This proved to be the latest ever recorded sighting in Gloucestershire for the moth.

Also fairly obvious, if they put in an appearance, are dragonflies. The most usual is the Common Darter. The males are red whilst the females are a bronze-yellow colour. Immature males resemble females until they assume their red colouration as they age. These dragonflies move with the same rapidity and flexibility as the hummingbird hawkmoth, hovering in mid-air one second and zooming off the next. They do like to rest up and sunbathe, however. A warm sun-kissed stone or strategically placed stick or post will often suffice as a resting point and this provides the opportunity for the careful observer to get a closer look. But beware any sudden movement. They have compound eyes which gives them superb vision and makes them alert to any perceived danger. 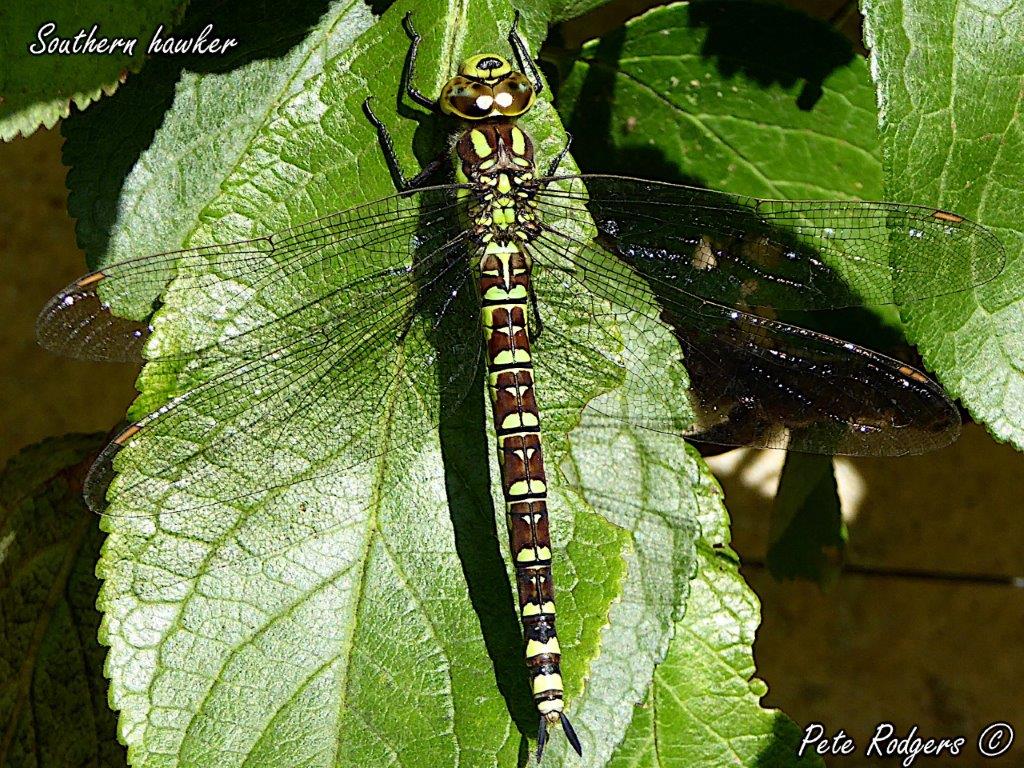 It’s the larger dragonflies that I find more exciting. Occasionally one of the hawkers will grace the garden with its presence, flying around like a small helicopter. More often than not they won’t rest and this makes identification trickier for me. But when they do take a break, with care, they can be studied more closely.

I often find it difficult to take in all the various colours and patterns sufficiently well to later confirm identity with a field guide. This is where a photograph is invaluable. Too often I have looked up some small creature or other in a guidebook or on the internet only to find that there are two or three different species that all look the same, only minor details setting them apart. I am left none the wiser as to what I have seen!

Flies congregate in the greenhouse in large numbers during summer so I resort to controlling their numbers with double-sided sticky pads, suspended by wires from the roof. It’s curtains if one gets stuck. I was therefore a little upset to notice one of these large dragonflies attached to a pad some days ago.

It was stuck by the legs and the tip of the abdomen. It tried to fly but only succeeded in causing the sticky pad to swing wildly from side to side. I considered getting out my stepladder in an attempt to release the hapless insect but I know how sticky these pads are, often getting my fingers stuck to them myself. Also, by trying to unstick the dragonfly I was quite likely to pull off bits of its body parts. I concluded that all I could do was to let nature take its course.

Imagine my surprise the next morning to find that the dragonfly had worked its way around to the edge of the sticky flypaper. It was motionless and had probably exhausted itself in its efforts. All to no avail, or so I thought. But when I looked later in the day it was nowhere to be seen. It had completed the great escape. Nor was it in the greenhouse trapped against the glass; it had found its way out of the open door and flown to freedom.

A sign that summer is now receding and autumn is upon us is the emergence of small birds working through the garden as one mixed flock. This will consist of, typically, a mixture of blue, great, coal and long-tailed tits with perhaps the addition of a robin, dunnock or goldcrest. 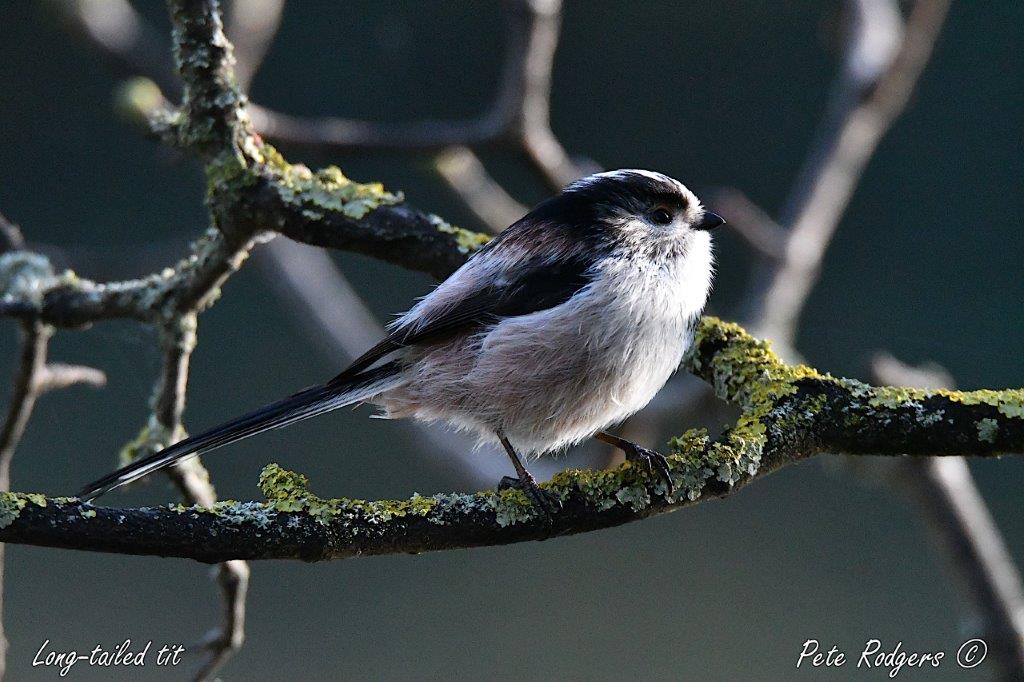 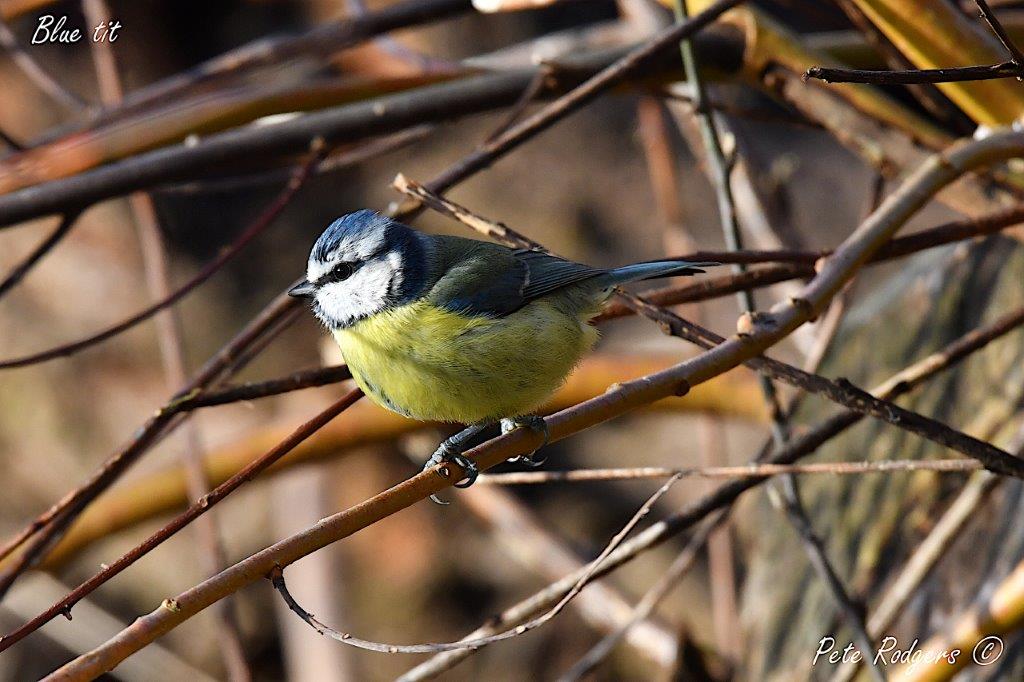 They are looking for food and get rather excited when they come upon the fatballs suspended from my crab apple tree. They are perpetual motion, flitting hither and thither and impossible to count accurately. Absolutely fascinating to watch. And then, as quick as they arrived, they’re gone.

It may be a while before they come back again, a day or two or perhaps a week but return they will until winter is over.

The onset of autumn means it’s time to tidy the garden and, in making a start last weekend, three frogs were found hiding away in the undergrowth. These are possibly the first ones I have seen in the garden this year so I was pleased to see them as they are useful allies for the gardener, helping to keep the slug population under control. It is most unusual to find more than one on any given day.

The frogs were all adult and in good condition. Once disturbed, they will usually move away in a succession of small hops, seeking the protection of another patch of undergrowth. I detained one for photographic purposes before sending it on its way, none the worse for its temporary hold-up. This one was a darkish brown colour and it blended in well with the soil, being impossible to see until it moved.

Their colour scheme does vary. Some are green and others somewhere in between green and brown. Undoubtedly the frog owes its continued existence in an urban environment to the number of ponds which are to be found in our gardens.

These ponds also provide a home for newts, the aforementioned dragonflies and a range of smaller invertebrates upon which these creatures live. They will all survive more easily without the presence of ornamental fish, although it is for the fish that most ponds are constructed in the first place.

Our summer visitors from the avian world are now making their way south for the winter. Migration has been underway for some weeks already. Non-breeders from the far north returned in early July and gradually their numbers have swollen with the addition of successful breeding birds and their fledged young.

The most obvious summer visitors in Winchcombe are the cuckoo, swift, swallow and house martin although the hedgerows will hold other visitors such as the warblers and perhaps the occasional flycatcher and redstart.

The cuckoo and swift have now left us and the others are following, usually without our being aware. There will still be some stragglers about into late October and some, such as the blackcap and chiffchaff, may over-winter here if the weather remains mild enough.

These birds will be replaced by winter visitors such as the redwing and fieldfare. The Wildfowl and Wetlands Trust at Slimbridge will once again play host to the masses of wintering duck returning from their northerly breeding grounds to take advantage of the milder weather here.

Also, one hopes, the wild swans and geese that used to populate Slimbridge in such numbers forty years or more ago and are now disappointingly, and worryingly, low by comparison.

Let me end my ramblings on an even more sombre note, also about a bird in serious decline, the turtle dove. There can be no-one who hasn’t heard of the turtle dove, even if only through ‘The twelve days of Christmas’. The turtle dove comes between three French hens and the partridge in a pear tree.

According to the song there are two of them. If matters continue as they are that number will have to be changed……to zero.

Turtle doves are smaller than our familiar wood pigeon, neat, attractively marked doves and by far the prettiest of the doves and pigeons found in the UK. They spend the winter in sub-Saharan Africa and migrate to Europe in spring to breed, returning in late summer and autumn.

They must contend with the vagaries of migration such as natural predation, bad weather and loss of suitable resting places through landscape degradation. An unwelcome addition to these hazards is the hunters in Europe who take a perverse delight in blasting these and other birds out of the sky for no other reason than they can. 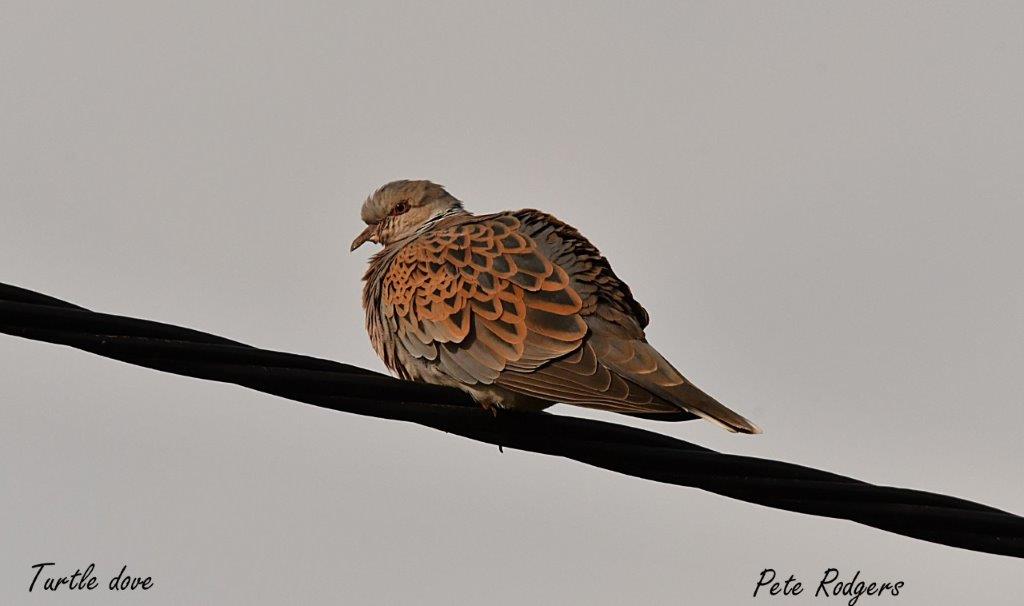 Unsurprisingly, turtle dove numbers are much reduced. Their population is literally in free-fall. Clearly it is a bird that needs serious support to survive. To this end the European Commission requested all member states, in 2018, to stop hunting turtle doves, a directive that not all countries are complying with!

When I first moved to Winchcombe in 1979, I heard the call of the turtle dove from the trees near Winchcombe Pottery. I again heard that call this summer on a visit to a nature reserve in Oxfordshire. That’s a gap of 41 years, quite unbelievable in the UK for a bird that was once relatively commonplace in suitable habitat. It recalls the demise of the passenger pigeon, an endemic bird that occurred in the U.S.A. in its millions until it was hunted to extinction. The last captive bird died in Cincinnati Zoo in 1914.