Sudeley Castle, a Cotswold gem in an Area of Outstanding Natural Beauty.

Explore 1,000 years of history, and see the final resting place of a Tudor Queen at Sudeley Castle.

With royal connections spanning a thousand years, Sudeley Castle has played an important role in the turbulent and changing times of England’s past.  Situated in an Area of Outstanding Natural Beauty (AONB), Sudeley Castle and the town of Winchcombe is a ‘must’ visit.

Sudeley is the only private castle in England to have a queen buried within the grounds – Queen Katherine Parr, the last and surviving wife of King Henry VIII.

Katherine and her husband Thomas Seymour arrived at Sudeley Castle in Katherine’s final months of pregnancy, in June 1548.  The dowager queen had her ladies at her side, along with Thomas’ young ward, Lady Jane Grey.

Katherine gave birth to a girl on 31st August, and named her Mary, after her godmother and stepsister, Mary Tudor, the future Queen Mary I.  However, the dowager queen soon showed the deadly signs of the dreaded puerperal fever and died 5 days later.

Lady Mary Seymour had been born into a happy, healthy and loving family, but by the age of seven months she was an orphan and a burden.  Her father, Thomas Seymour,  had been executed for treason on 17th March 1549.  Katherine’s friend, Catherine Brandon, the Duchess of Suffolk, was appointed as Mary’s guardian but found the burden of paying for a Queen’s daughter’s household too much. She appealed to William Cecil to talk to the Duke of Somerset about helping her with Mary’s upkeep and this resulted in an act of Parliament being passed in January 1550 allowing Mary to inherit her father’s property.

The next record of Mary Seymour is a grant from the privy council on 13th March 1550 for her household’s wages, liveries and food. Sadly, that is the last we hear of little Mary Seymour, who would have been around 16 months old when she was allowed to inherit Thomas Seymour’s remaining property. Mary just disappears from the records and she never claimed her inheritance.

Henry VIII , Anne Boleyn, Lady Jane Grey, Queen Elizabeth I and Richard III have all played a part in Sudeley’s story. King Charles I found refuge here during the Civil War, when his nephew Prince Rupert established headquarters at the Castle. Following its ‘slighting’ on Cromwell’s orders at the end of the Civil War, Sudeley lay neglected and derelict for nearly 200 years.  Queen Mary visited the castle in 1922 where she lunched with Mr & Mrs H Dent-Brocklehurst and inspected the castle and grounds.

In 1837, Sudeley was rescued by the wealthy Worcester glove-makers, brothers John and William Dent, who began an ambitious restoration programme. This was continued by their nephew, John Coucher Dent, when he inherited the castle in 1855. His wife, Emma Brocklehurst, threw herself enthusiastically into Sudeley’s restoration, at the same time forging strong links with the nearby town of Winchcombe.

1865-1867 Alms houses and a school designed by George Gilbert Scott were built with legacies from the Dent family.

Emma’s husband died in 1885 and Emma dedicated herself to the improvement and welfare of the castle estate and neighbouring Winchcombe.  It is the results of Emma’s dedication that are so evident in the gardens and exhibitions at Sudeley today.

Emma died in 1900 and the castle was inherited by her nephew Harry Dent Brocklehurst, as this was a bequest made to him by Emma’s husband John Coucher Dent in 1885.  Emma and John did not have any children.

The Dent Brocklehurst’s have held Sudeley in succession since that time.

1927- Jack Dent Brocklehurst took over Sudeley from his father but crippling death duties forced the sale of much of the 12,000-acre estate, now only a tenth of its original size.

During the wartime years,  Sudeley became a prisoner of war camp for Italians and Germans who worked on the land.  It also became a ‘safe house’ where part of the Tate’s Gallery’s picture collection was housed and protected from the Blitz.

Mark Dent Brocklehurst inherited the castle in 1949 , with his mother living at the castle until she died in 1969.  After which, Mark and his American born wife Elizabeth decided to open the castle to the public as a tourist attraction.

Sadly, Mark died in 1972 and death duties once again were incurred.  Elizabeth continued with their work.

Sudeley Castle & Gardens is now the home of Elizabeth, Lady Ashcombe, and her son, daughter and their families. The family is committed to the continued preservation of the castle, its treasures and the ongoing restoration and regeneration of the gardens.

Lovers of history, the Tudors, walking, cycling, independent shops and eateries, will find all they need for a wonderful visit or stay in this beautiful Cotswold Town.

Take a tour of the beautiful castle and gardens. 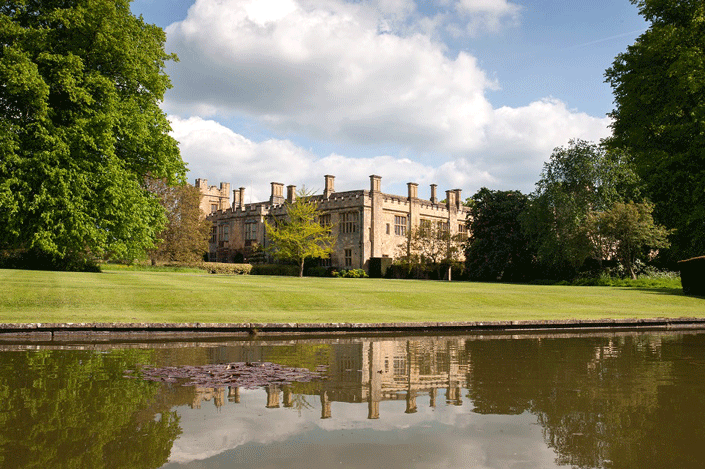